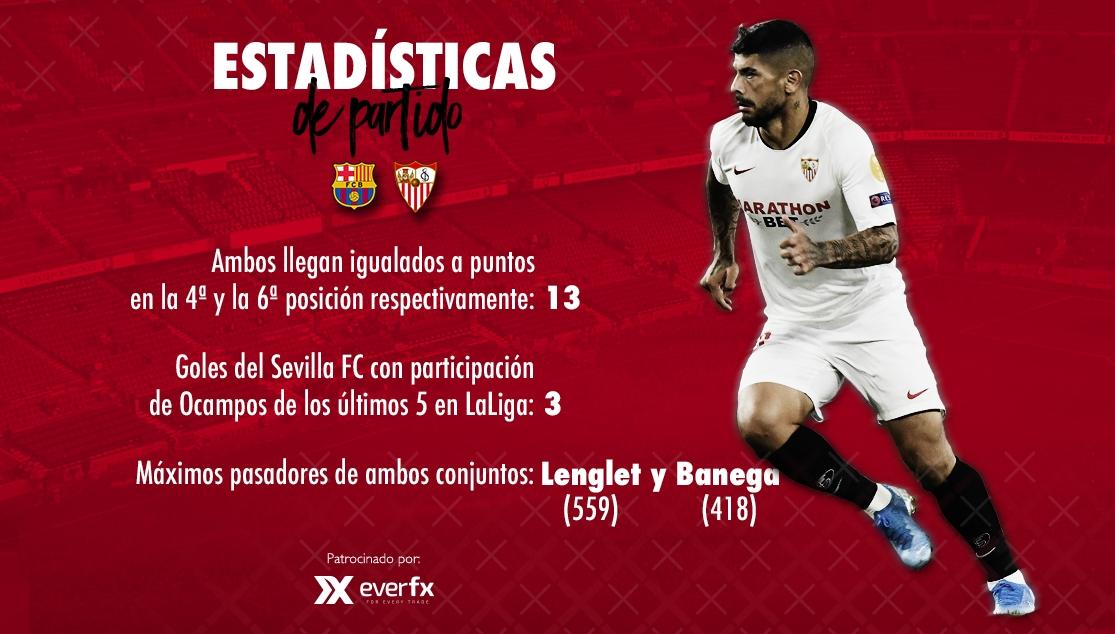 Bar the second half in Eibar, Sevilla FC have been very good on their travels this season

Every Sevilla fan will know the bad run of form that they have had in the league at the Camp Nou over the years. They haven't taken all three points from the iconic Catalan stadium, which is no easy place for anyone to visit, in almost 17 years -  since December 2002. Now, it could be time for one of the teams who have been called to finally break their bad run of form there and find that elusive win. The lack of competitiveness in this fixture in the 21st century has been talked about a lot, with Sevilla only managing two draws since the victory in 2002.

Sevilla also have a bit of redemption to give to themselves on the road, after the collapse in the last half hour in Ipurúa against Eibar, which put a halt to a brilliant first half performance. Before said game, Sevilla FC had put a run of four straight victories away from home together - three in La Liga and one in the UEL- without conceding a goal. Now, it's time to visit the Camp Nou before the league stops for the second international break of the season, and Sevilla are boosted by the return of defensive stalwart, Daniel Carriço.

A lot of the players who were rested against APOEL are expected to return to the starting XI, including Jesús Navas, Fernando and Lucas Ocampos, who is on a great run of form of lately. Beside Fernando in the midfield will probably be Éver Banega and Joan Jordán; however, Franco Vázquez or Óliver Torres could also be used in the centre midfield. Up top, Luuk de Jong is expected to return to lead the line having been a near permanent fixture in Lopetegui's league team selection. On the other hand, he might hand Chicharito his first league start after he scored the decisive goal on Thursday night.

As for Barcelona, Ernesto Valverde will be able to use Jordi Alba and the ex-Sevilla youth academy product, Ansu Fati, after both players the all-clear from the medical team to return to action. Clement Lenglet is suspended for the game, and in his absence, La Masia product Ronald Araujo steps into the squad. Meanwhile, Umtiti and Junior are still out injured and Carles Aleñá misses out on the squad. Back in the squad is no other than Lionel Messi, who has a habit of scoring against Sevilla with a record of 36 goals in 37 games.

After Thursday night's encounter, a lot of changes in the starting XI are expected

The outfit from Nervión are, however, only focused on giving the best possible account of themselves. Lopetegui has ensured that this is the only motivation they need, and that they don't need to worry about recent results in the Camp Nou or obsess over the fact that they will be facing Lionel Messi. Although they are coming to a traditional very difficult stadium in which to play, the team seem to have put to bed what happened in Eibar with their last two victories, and they will be coming into this game full of confidence.

Antonio Mateu Lohoz will be the referee in charge of the encounter, who refereed the team's last meeting back in Sevilla in February. In the 28 games that he has refereed a Barcelona game, the Catalans have won 21, drawn six and only lost once. As for Sevilla FC, he has taken charge of a few more of their games. Out of 30 games in total, Sevilla have won 15, drawn three and suffered 12 defeats. Ignacio Iglesias Villenueva, from Galicia, will be in charge of VAR.

First team
THE BANEGA FAMILY, WITH THOSE MOST IN NEED IN ROSARIO DURING THE PANDEMIC
Leer más
END_OF_DOCUMENT_TOKEN_TO_BE_REPLACED