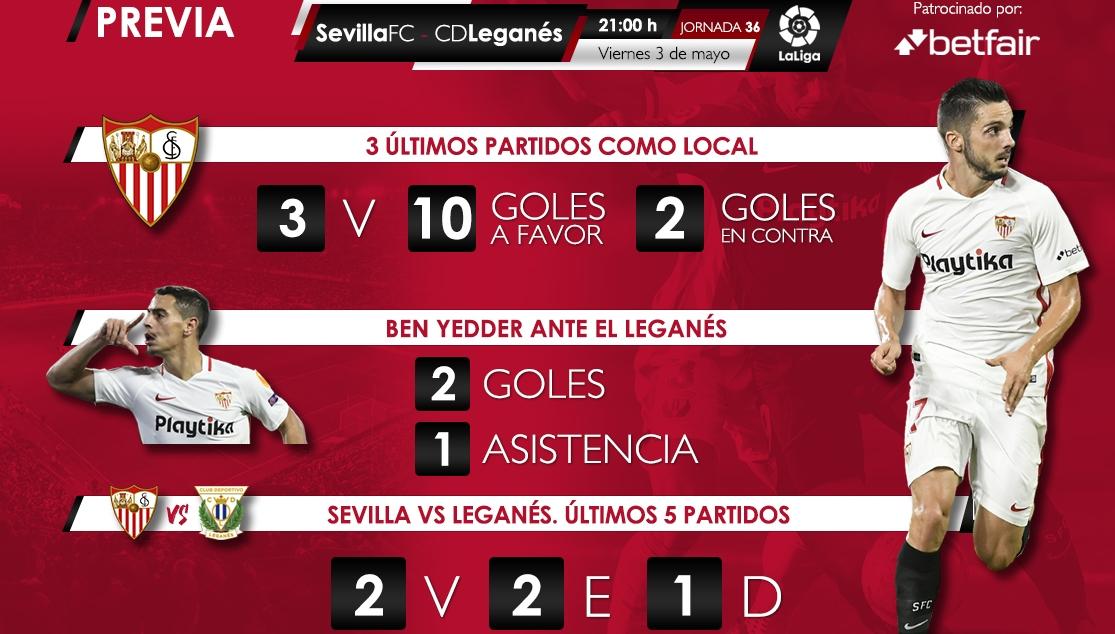 THREE POINTS TO SECURE EUROPE AND EDGE TOWARDS THE CHAMPIONS LEAGUE

Before the vital fixture to end the season in two weeks time against Athletic Bilbao, Sevilla FC come up against CD Leganés tonight at the Sánchez-Pizjuán. Sevilla do not have Champions League qualification in their hands but three points would be vital to keep the fight alive to qualify for Europe once more this century. In fact, should Sevilla defeat Leganés, seventh spot at least would be mathematically secure.

Sevilla have to wait until Sunday for their rivals to play: Getafe, Valencia and Athletic Bilbao. But Caparrós' men can only concentrate on their own job and look for the three points against Leganés. André Silva and Wöber are still out through injury and Carriço and Banega also miss out. However, the manager is able to welcome Mercado, Gonalons and Nolito back to the squad.

Leganés, virtually safe, are looking for a win that would mathematically secure them in the league for the fourth consecutive year. Should Leganés win, they would not have to rely on any other teams, but if Valladolid were to lose they would also stay up. Winning against Sevilla would also help them put an end to a bad run of one point out of the last nine which has taken them out of the European fight.

Leganés may rotate as even a loss could keep them up

The last time Leganés visited Nervión was in last year's Copa del Rey semi final. It was one of five defeats that the Madrid side has suffered in Nervión out of six visits. In fact, out of the past thirteen matches, they have only picked up two wins. Regarding their squad, Mauricio Pellegrino is still without Rubén Pérez through injury. The rest of the squad is available however the coach may decide to rotate.

Regarding the referee, Santiago Jaime Latre, who refereed last week's match against Girona, is in charge of VAR tonight. Tonight's referee is Alberto Undiano Mallenco who will retire from refereeing at the end of the season. He has only officiated one of Sevilla's games this season, the goalless draw against Villarreal at the start of the season.