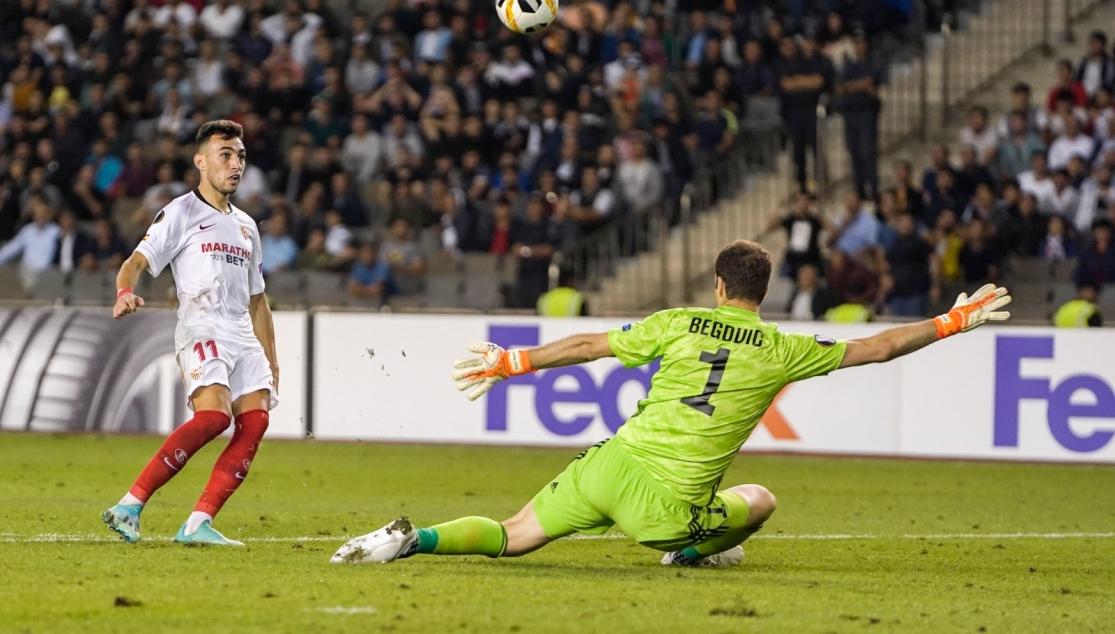 0-3: A MUCH-CHANGED SEVILLA SIDE START THE EUROPEAN CAMPAIGN WITH A RESOUNDING VICTORY

Although Qarabag withstood Sevilla's dominance for more than an hour, Chicharito's free kick opened the floodgates, and Munir and Óliver Torres finished off the win with precise finishes

There were reservations about tonight's match against Qarabag after their previous results against Spanish sides. They were all warned about the Azerbaijani side, who did indeed resist Sevilla's dominance for more than an hour. A much-changed Sevilla side were unable to take a deserved lead until Chicharito's stunning free kick. As Qarabag opened up, trying to equalise, Munir and Óliver Torres rounded off the win, as the five-time winners left nobody in any doubt about their standing in the group, even at this early stage.

Sevilla dominated the first half without opening the scoring. Those who know the Azerbaijani side well asked for Lopetegui's side to play at a high tempo, which they duly did. Both Diego Carlos and Chicharito had very early chances, but were unable to beat Begovic. Richard took advantage of some slack defending by Sevilla and fashioned a chance, but his shot was wide of the mark. The match had started frantically but, even as the game slowed down, the chances continued to flow. Abbas Hüsyenov went close from the right-hand side, but his vicious effort fortunately went wide.

Sevilla had opportunities to score in the first half, but the goal was not forthcoming

Pozo was Sevilla's best outlet in the first half, but Qarabag defended well despite Sevilla's strikers creating a number of chances. After half an hour, Qarabag had their best chance of the game, with a shot from Jaime Romero from the wing grazing the crossbar, although Vaclík appeared to have it covered. Munir had another chance before the break, after a lovely back-heel and cross from Pozo, but he could not open the scoring. Sevilla had dominated the first half, but were unable to convert that dominance into a lead.

The dominance continued in the second half, but Qarabag dropped even deeper. The match looked to be going in Sevilla's favour, but they could not find a way through. Just before the hour mark, Joan Jordán went close with a chance, but his shot fizzed narrowly past the post. It was the warning shot for Qarabag, and the opening goal followed soon after, another free kick, just like in Vitoria. Jordán had been taken off, so the responsibility fell to Chicharito, who drove the free-kick home, beyond Begovic's right hand.

The game was deadlocked but Chicharito's free kick opened the floodgates

A "golazo" from the Mexican, his first goal as a Sevillista, and, finally, the lead that Sevilla deserved. However, Lopetegui did not hesitate to substitute the Mexican international, bringing on Banega, which meant Munir went up front. Zoubir then had Qarabag's only shot on target 20 minutes before the final whistle. Qarabag pressed high up in search of an equaliser and paid the price almost immediately, as Banega opened up the defence with a classy ball which released Munir, who chipped the onrushing Begovic, giving Sevilla a very welcome 2-0 lead with just over ten minutes remaining.

The win was rounded off after a lovely team move, Pozo crossing the ball deep into the box, which was headed down by Vázquez and acrobatically converted by Óliver Torres. Dabbur then came off the bench to make his Sevilla debut. Lopetegui's men, who will face Real Madrid on Sunday as they try to stay top of LaLiga, lead the way in Europa League Group A, level on points with Dudelange, who came away from Cyprus with a surprise 4-3 win against APOEL Nicosia.

REFEREE: the Ukranian Yevhenii Aranovskiy. Aílton and Medvedev were booked for the home side, and Gudelj was booked for Sevilla.

First team
THE BANEGA FAMILY, WITH THOSE MOST IN NEED IN ROSARIO DURING THE PANDEMIC
Leer más
END_OF_DOCUMENT_TOKEN_TO_BE_REPLACED