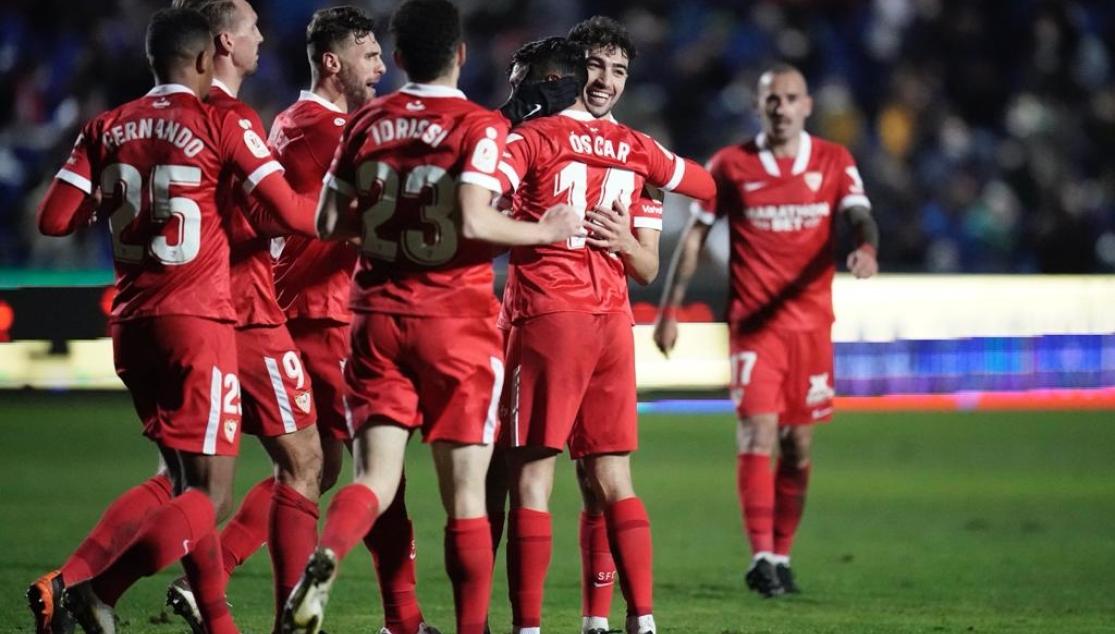 0-2: A PROFESSIONAL WIN IN LINARES SEALS THE TICKET FOR THE ROUND OF 32

A free-kick from Óscar and an own goal from Fran Lara, just before and after the break, sealed Sevilla's ticket into the Third Round

Sevilla FC seal their ticket to the Round of 32 in the Copa del Rey with a 2-0 win in Linares. The deadlock took longer to be opened than in the First Round against CD Ciudad de Lucena, but Óscar's free-kick got things rolling. Julen Lopetegui's team, which saw changes from the line-up against Betis, killed the game in decisive moments just before and after half-time. It was a tough blow for Linares who were particularly strong in the first half and, despite the scoreboard, never let their heads drop during the game.

Linares had the better start to the game. Much more used to the state of the pitch, which was not helped by the low temperatures, they started with a high-pressing game, pushing into Sevilla's half although not quite creating too much danger in Bono's goal. A cross-cum-shot from Carnicer and a header from Rodri were the best attempts from the Segunda B team. Sevilla, despite beginning to control possession more after a difficult start, struggled to worry Razak until Óscar Rodríguez stepped up to take a free-kick just before the break.

Sevilla would have to wait until injury time in the first half to open the scoring through an Óscar set piece. The midfielder expertly floated the ball over the wall and placed the ball into the corner, well out of Razak's reach. It was a blow for Linares who would find themselves 2-0 down almost immediately after returning to the pitch. A shift of pace from Idrissi opened up space for a cross which was sent in to his own net by Fran Lara as he attempted to clear it.

The second settled Lopetegui's team down and they began to control the game, although the physical Linares never gave up. Rodri did have a chance to halve the deficit after Bono rushed out of his goal, but Sevilla managed to clear it off the line. The first changes of the game came around the halfway mark in the second half, with Franco Vázquez and En-Nesyri coming on. Linares also made changes and the game lost a bit of its rhythm as Sevilla looked to see the game out.

Idrissi was key in the second goal

Idrissi, who was causing danger all game down the wing, had a chance to score a third as did Óscar Rodríguez who was demonstrating his set-piece abilities. Alberto González' team began to fatigue and Bono would have little more to do. Lopetegui looked to close the game out by bringing on Gudelj and Jordán. Chendo had a chance to get a goal back for Linares following a clearance from Koundé but Bono demonstrated his reflexes and send the ball behind for a corner.

Sevilla FC's name will be in the draw this Friday at 13:00 CET for the Round of 32. The draw will take place in the Ciudad del Fútbol de Las Rozas. With Getafe and Celta out of the competition, two more teams from La Liga will need to taste defeat on Wednesday and Thursday for there to be no all La Liga match ups in the next round. Other than Sevilla, Villarreal and two Segunda B teams have secured their passage, Córdoba and Ibiza.

First team
LOPETEGUI: 'IF YOU DON'T SCORE AND LET THE GAME GO ON, THESE THINGS HAPPEN'
Leer más
END_OF_DOCUMENT_TOKEN_TO_BE_REPLACED