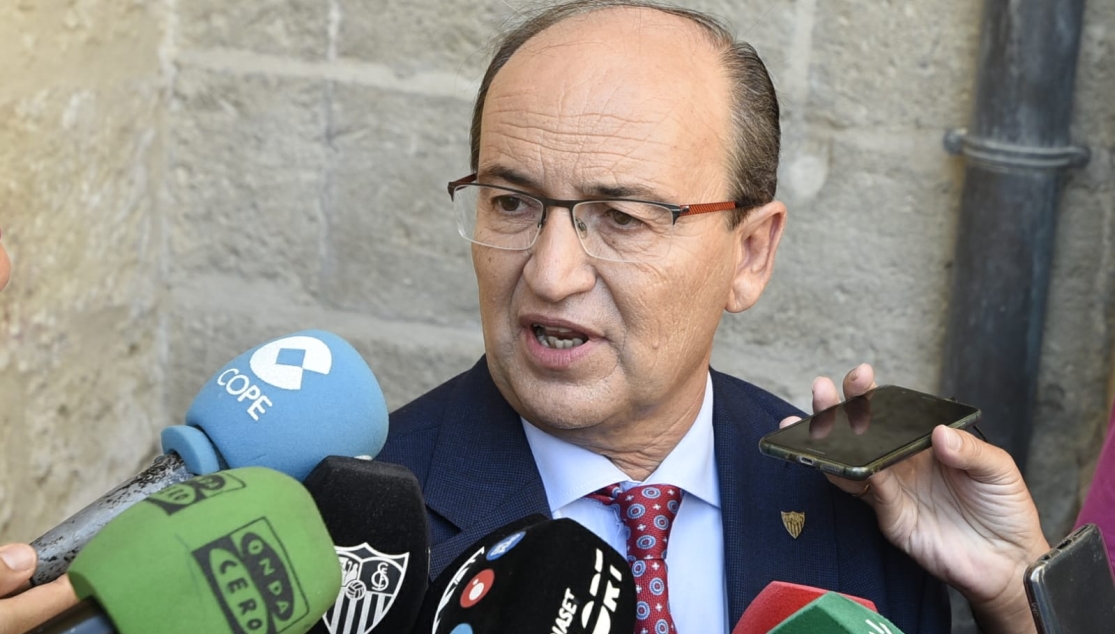 JOSÉ CASTRO: "SIX POINTS OUT OF SIX IS A GREAT START"

"We will continue working in order for our stadium to be as good as we all want it to be", he spoke regarding the on-going works at the Sánchez-Pizjuán

The President, before answering questions from any journalists, announced the extension of Pozo's contract with the football club: "In addition, today it is pleasing for us to announce that Alejandro Pozo has extended his contract for another three years, on top of the one he already has left".

"We have been one of the teams to win both our opening two league games, therefore it's better to have six points than any other number of points", José Castro commented on his evaluation of the first two matchdays.

Surrouding the media interest in Israeli striker Dabbur, the President made it clear that "Dabbur is a Sevilla player, we are happy with him. He is not going to leave Sevilla; we are not listening to any offers for him and he is going to stay here".

"Until the market closes, anything can happen"

"We are a hard-working club, for many years we have had benefits and money to spend. There is still a few pieces of the puzzle left to fill in. From now and until the market closes, anything can happen. But this is a question for the staff. Monchi and his team are working, the market remains open and my obligation is to make sure we have the funds for any acquisitions if they are necessary".

"The excitement surround the team, which is due to the unequivocal planning and the work that has been done over pre-season, makes everyone excited - me being the most! I believe we have a good team with lots of strong points. It's nice to be on top, but we have a lot of work to do to stay there". He also added: "I always have confidence that we are going to do well".

Speaking about Ansu Fati's debut with Barcelona, a player who used to play for Sevilla when he was younger, Castro made it clear: "The rules allow this type of thing to happen and it's not the first time that one of the bigger clubs have taken our players; even if both us and other clubs sometimes complain".

Asked about the reconstruction work taking place, Castro commented that "throughout my presidency, I have said that we need new infrastructure and this is what is happening. In the coming days we will publish more information on the training centre. The provisional end date of the construction works in the stadium is set for June, but it will be done as soon as possible. We will continue to work in order for our stadium to be as good as we all want it to be. The fans asked us for a third tier, and it is obvious that we need more space for what we are constructing. It can be done and we are looking at how and when we can do it".

Speaking about the 'Trofeo Antonio Puerta' tournament, the President couldn't be clear on the dates for the games: "With the construction work being done, it makes it slightly more complicated. Right now, we don't have a date where we can host the tournament. If it is not possible, we will look for another solution".

"It was a long time ago that I decided to focus fully on the team, that right now is the leader with six points that no-one can take away from us now. We must continue carefully in order to achieve the most ambitious of our objectives. We are very excited to achieve certain milestones, because the material is there and we have all worked hard for it", Castro finished speaking by highlighting his excitement for the project.