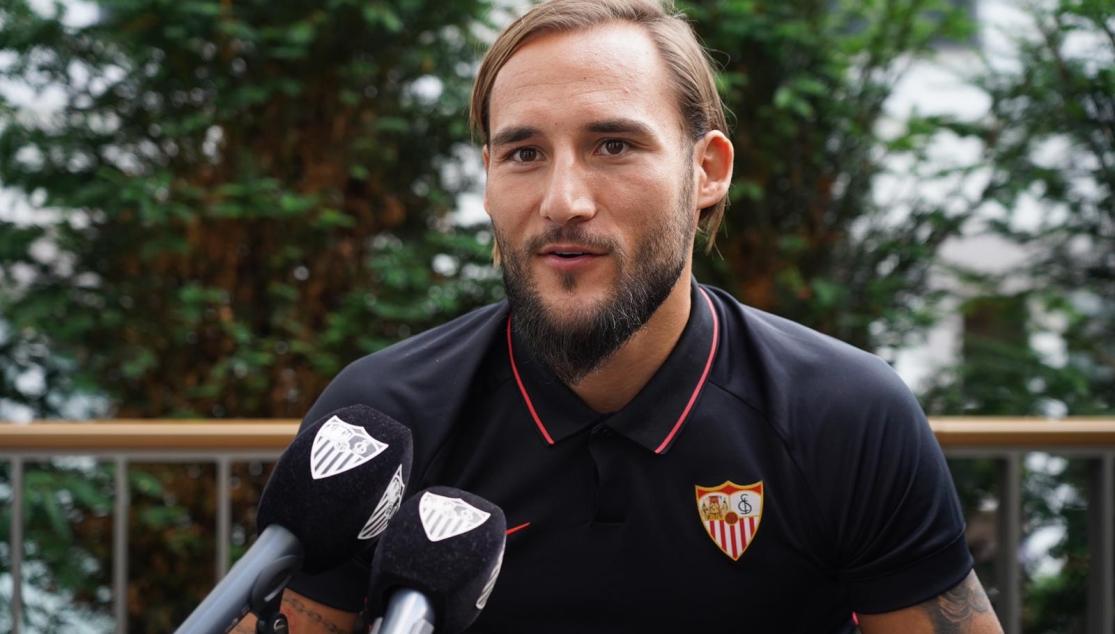 GUDELJ: "WHAT I EXPERIENCED WHEN I ARRIVED AT THE HOTEL WILL STAY WITH ME FOR A LIFETIME"

The Serbian, who is very grateful for the welcome from his teammates, is ready to help the group

Nemanja Gudelj is now an option for Julen Lopetegui. After announcing his positive test just days before the initial flight to Germany to face Roma, he has now recovered and tested negative, and showed his happiness at the team hotel in Düsseldorf in his interview with official media: "I feel very good. I was well all the time at home. It was difficult being at home for two weeks, knowing that you're well and can help the team, but with the virus you can't go. It was difficult but I was good, training at home. I knew that I could test negative at any moment and I had to be ready to help the team".

Fortunately, he never noted any symptoms: "I never had moments where I was scared or was feeling bad. I know it is a serious virus but I felt well. I knew I had the virus and the doctor told me to rest if I felt bad, but my body needed to train, the coaches were sending me training sessions every day and I did them all".

He has not been with them, but he felt close to his teammates: "I've noted a lot of affection, with messages on social media and call. It's a sign of the family that this team is. You see family when things go badly, because when they go well the whole world is your friend. That's where the real family has been seen and I want to thank my teammates because, thanks to them, I've been able to go through this in the best possible way".

"You see family when things go badly, and I want to thank all my teammates"

Thursday's reunion with his teammates is something he won't forget: "I arrived at the airport and I did not know if they knew I'd arrive at that moment. I opened the curtain and the whole club was there. I did not expect it and for four or five seconds I did not know what to do or what to say. It's a good thing that people have recorded it, because I want to have it for life and it's going to stay with me. You have to be lucky to experience this some time". And that's because he always looks on the bright side: "Bad things in life make you stronger, and you can say that about a person or a team. There have been occasions when we've fallen down together and other times, a player or two. This had made us even stronger and it's incredible".

He has not spoken to Lopetegui about his availability, but he does not need to: "He knows I've been training and I've come to help the team however I can. Whenever it's my moment I'll be there to give 110%". Gudelj wants to be back in the team and playing that "champagne football" he spoke about on his arrival: "We say this a lot in the dressing room or after training. I said it because I'd seen them on the TV and I already knew we had a great team, but doing it at difficult moment and without being able to train together for two weeks because of my positive test... These things aren't easy. You want to do the best you can and prepare for the match, but there were inconveniences. Seeing the team play like that in the two matches... I saw spectacular football in the first match and in the second one it was a bit different, but you saw the team attacking every minute with hunger to score the goal".

Gudelj is conscious of his role in the group: "I've always said I will always be who I am and I want to thank my teammates for accepting me in the group. I arrived quite late but you can see it's a spectacular group. These things, the treatment from the whole club and all the fans, they make you feel at home. I can say that I really feel like a Sevillista".

He has been on the sidelines the past two games and acknowledges that it isn't simple: "It's a lot worse. You've got more nerves. I've sweated more than when I've played and I can say I don't like watching it at home because you know you can't do anything. It's different on the pitch, and you have everything somewhat more controlled. At home you depend on other and you can't support them nor talk to them. It was the hardest thing for me". He also spoke about the goal from Ocampos and what it cost him: "I think I broke my phone. All of us in my family were jumping and celebrating. It was incredible".

"By watching the matches at home I sweated more than I do on the pitch. It was the hardest thing for me"

The defensive strength means a lot to him: "It's very important and it's been our quality all season long, but now even more so. If you look at the centre backs, Fernando, Bono saving everything. I've not seen many opportunities in the last two matches because our defence is a tough wall. They have to be very good and very clever to score against us". Finally, he wants to make it clear that the fans are with them: "The first thing I'd say to them is thanks for all the support that they've given us so far. Without them we wouldn't have got here. We always play with an extra player and, although they won't be in the stadium, we all feel the support and we ask them to keep doing that".