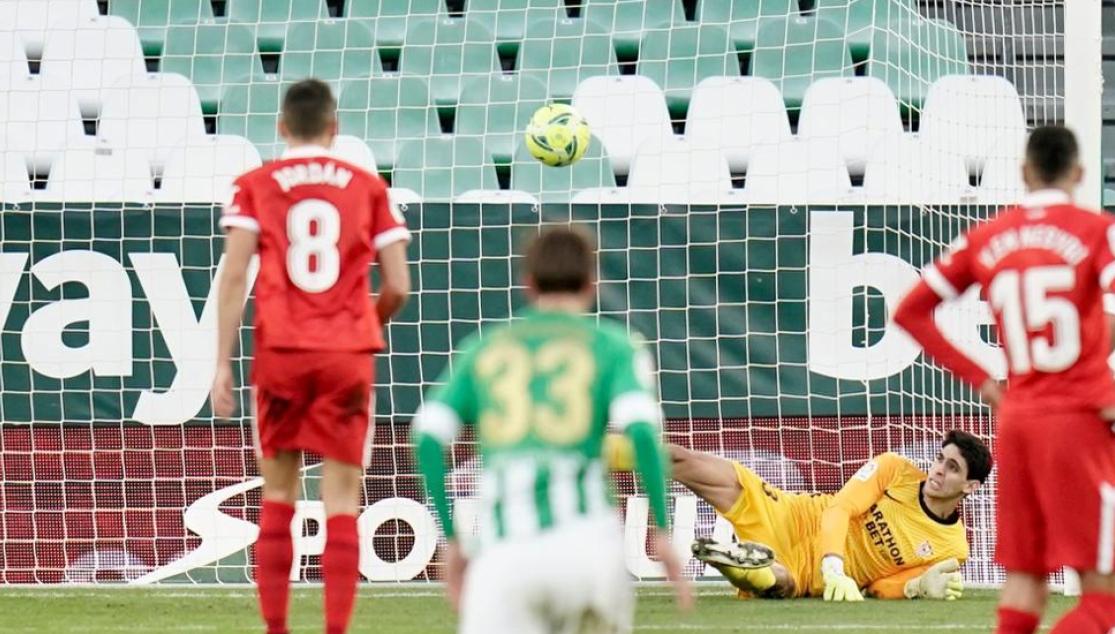 BONO, THE FIRST SEVILLA GOALKEEPER TO SAVE A PENALTY IN A TOP-FLIGHT DERBY

Sevilla FC have now conceded four penalties in derbies that were later missed, but, until yesterday, every missed penalty had gone wide

99 Sevilla derbies have now been played out in the top-flight. There have been all kinds of matches and circumstances, which means, by now, nearly everything has happened in a derby match between the two sides. However, during yesterday's draw in Heliópolis, a point which did not truly satisfy the Nervionenses, Sevilla FC picked up another first, as their goalkeeper saved a penalty against the old enemy for the first time.

It was not the first penalty of the afternoon. Canales had already equalised from the spot, which secured a point for the hosts, but their second penalty gave them a huge chance to take the lead. Nabil Fekir took the responsibility, but Yassine Bono gussed correctly and pushed his effort away, with just fifteen minutes of normal time remaining. It was the fourth time that the green-and-whites have missed a spot-kick in a top-flight derby, after Daucik (1960), Ivanov (1991) and Robert (2007). However, this was the first time that the goalkeeper had saved a penalty, unlike the other three occasions, where their efforts had all missed the target.

This means Bono has saved his first penalty in LaLiga and his second for Sevilla FC, after denying Wolverhampton Wanderers' Raúl Jiménez in the UEFA Europa League Quarter Final in August. Bono has now made 36 appearances as a Nervionense, with 24 wins, six draws and six losses. He is unbeaten in 83.3% of his matches and has kept 20 clean sheets, which equates to 55.6%.

First team
LOPETEGUI: 'IF YOU DON'T SCORE AND LET THE GAME GO ON, THESE THINGS HAPPEN'
Leer más
END_OF_DOCUMENT_TOKEN_TO_BE_REPLACED