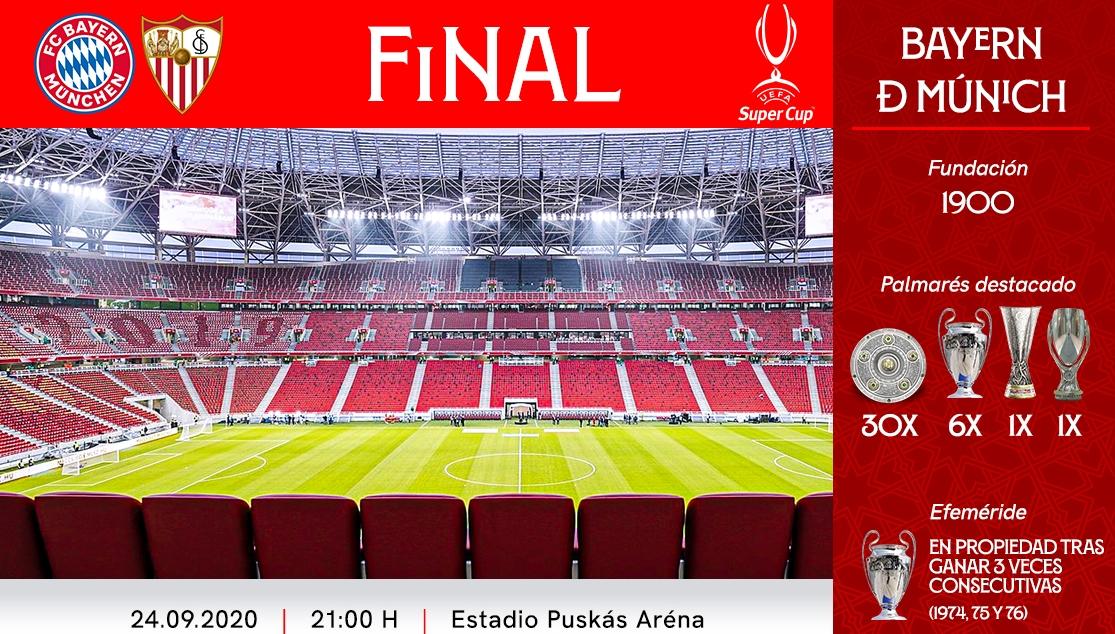 DREAMING FOR A MAGIC EUROPEAN NIGHT AGAINST BAYERN MUNICH

Another historic night has arrived for Sevilla FC. On a normal Thursday in September, with the footballing calendar up in air as a result of Covid-19, Sevilla FC have nothing less than a European final on their agenda, a more than merited date after winning their sixth Europa League title last month. Sevilla FC, alongside 500 fans in Budapest, will contest their sixth UEFA Super Cup, hoping to win their second.

Ahead of the team is the Champions League winners, Bayern Munich. They arrive in Budapest having won their sixth Champions League this August. With their victory against PSG, the Bavarians sealed a treble, winning the Bundesliga and DFB-Pokal as well. Bayern will also be gunning to win their second UEFA Super Cup after winning their first in 2013.

Bayern Munich, like Sevilla FC, have one UEFA Super Cup to their name

Sevilla FC have arrived in Budapest full of excitement and energy, more than aware of the difficulty of the task that awaits them, but with determination to bring yet another European trophy home to the Andalusian capital. Just over a month since winning in Cologne, Sevilla hope to beat another European giant and, after failed attempts against AC Milan, Barcelona and Real Madrid two times, repeat the feat of Monaco 2006 and bring home the UEFA Super Cup.

Julen Lopetegui, speaking in front of the press, underlined the 'incredible excitement' with which his team is preparing for the final. The coach has all 25 of the players who travelled to Hungary at his disposal for tonight.

Hans-Dieter Flick, Bayern Munich's coach, will be without Kingsley Coman, while he would not confirm whether or not Lewandowski would make tonight's match. The Polish striker suffered a knock in Bayern's last match, a 8-0 rout against Schalke 04.

The match will kick off at 21:00 CET in the Puskas Arena in Budapest, with the match being refereed by the Englishman Anthony Taylor.