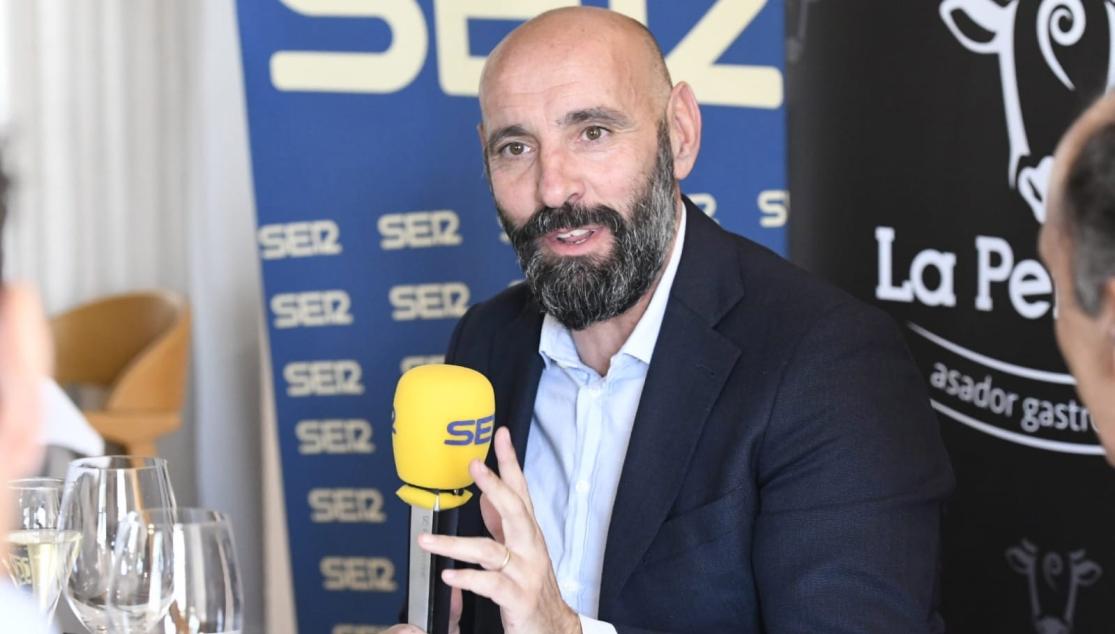 MONCHI: "EXCUSES AREN'T USEFUL, THIS IS HOW YOU BUILD A BIG SIDE"

"Strikers have good and bad spells, the goals will come sooner rather than later"

The general sporting director of Sevilla FC, Monchi, spoke to Cadena SER on Radio Sevilla on Monday afternoon, where he analysed the Nervionenses performances so far and covered many topics, such as strikers, confidence in the manager, transfer plans and aims.

Monchi started by talking about Sunday's match at Barcelona: "De Jong did not lose the match, Sevilla did as a team. Luuk's misses do stand out, but there were other things. We played a very good game and I want to focus on this view of the match, but when you lose by four goals, it's painful and it's tough to stand back up. There are more positives than negatives, and of course there are some negatives".

"I am happy when Sevilla win, it doesn't bother me which players go out and do that"

Monchi spoke about Lopetegui's ideas: "I have so much confidence in the manager, I know he will make the decision which is best for everyone, and will give us better results. I think the most important thing is the result, and I don't have to go down to the dressing room to tell the manager who should play. I will lend him my support whenever he needs it, as I have always done, and it doesn't go badly for me. I am happy when Sevilla win, it doesn't bother me which players go out and do that".

The situation regarding strikers

Dabbur's lack of gametime was also brought up: "There is nothing untoward regarding Dabbur. He's a good lad, a top professional. The manager thinks some players are better for his style of play. Strikers live off confidence and form, and I'm sure Dabbur will play. There are players who need time to adapt and that yields success. We don't measure the manager's results, if he is right or wrong, but he is deciding what he thinks is best for the team".

"Strikers have good and bad spells; I'm very confident in De Jong and it will be my failure if it doesn't work out"

Monchi also showed his confidence in De Jong and his ability to score goals: "It's difficult to stay away from what people say on the street and in the media. I'm very confident in De Jong and the goals will come sooner rather than later. We can't compare him to other player, but there are players who take a while to score. Strikers have good and bad spells, it isn't an argument in defence of him nor an excuse. If he doesn't score goals, it's my failure, but I'm a believer in that strikers make goals, which they have done despite not scoring".

Balancing the books in the transfer window

"We had to sell Sarabia and Ben Yedder, due to the numbers. I had a few different ideas for this season. Some depatures, for example, they did not come off as I thought they would. That responsibility is mine, and if we couldn't sell players then we had to loan them out. I worked with complete freedom and I have no excuses for not doing what I wanted to do", Monchi explained, about the transfer plans for 2019/20.

"We have to focus on reality and not excuses. Everyone takes responsibility, that is how you build a great side"

He also spoke about how a great side is made and the time that his needed: "If I have to be annoyed about the lack of gametime for Rony, Koundé or Gudelj, I have to be annoyed with myself. The manager picks the team he thinks is most useful. Saying that I have made a mistake with some players early on isn't good. Some things need reality, not excuses. We don't shy away from any criticism. The manager takes responsibility, as do I, that is how you build a great side, I don't understand any other way of doing it".

Demands at the club

"Sevilla isn't a club where the fans accept mediocrity. The club has grown and I can't come and say things which aren't true. We have to aspire to the best we can, this has made us grow. If you set a goal, it's more feasible than if you don't. This club is based on success and this is what the fans want. You can see how huge this club is, we're sixth, unbeaten in Europe, and there's negativity. The manager has taken this on board and I'm very confident that he will respond well".

"The message is always about ambition, I don't believe in anything else"

"This club has grown through ambition and not settling for what we've got, and we have to continue like this. We have played in finals and won them. This has helped us to grow and I am not going to change my message about ambition, I don't believe in anything else".

First team
THE BANEGA FAMILY, WITH THOSE MOST IN NEED IN ROSARIO DURING THE PANDEMIC
Leer más
END_OF_DOCUMENT_TOKEN_TO_BE_REPLACED