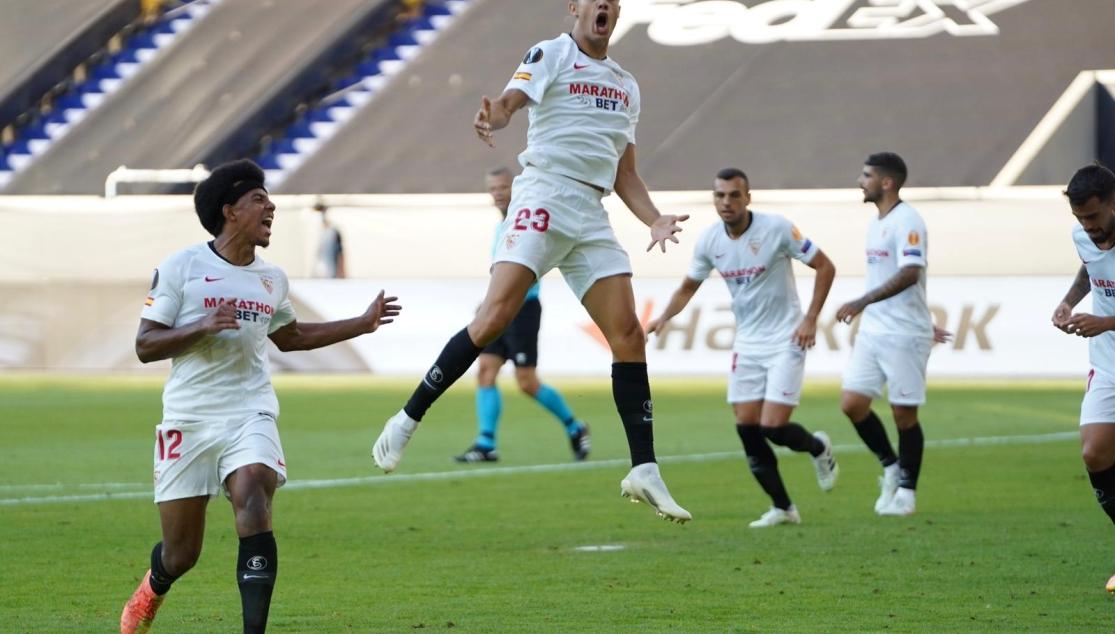 Sevilla FC are into the UEFA Europa League quarter finals. After a long wait since March to face AS Roma, the Nervionenses dominated the match from start to finish, and had a multitude of chances as both their attacking and defensive displays ensured that Julen Lopetegui's men were worthy winners of the tie at the MSV-Arena in Duisburg. Roma failed to score for the first time in over ten encounters and, once again, Sevilla kept a clean sheet.

Magnificent. Sublime. Colossal. Some of the adjectives that could well be used to describe Sevilla FC's first half performance against AS Roma in the UEFA Europa League Round of 16. It was an overwhelming performance from the Andalusians, pressing high up against the Italians, dominating possession and creating a whole range of changes, and the decision to do so paid off, as they went into the interval with a two-goal lead, which could well have been more, thanks to goals from Reguilón and En-Nesyri.

The first of those came in the 21st minute after a wonderful ball from Banega on the right-hand side to Reguilón, who chested the ball to beat the first Roma defender. The left back continued to power forward and beat Ibáñez for pace to go clean through on goal, where he coolly finished beyond the despairing Pau López. The Blanquirrojos had already gone close with a powerful drive from Ocampos, which was well saved by the Spanish goalkeeper, and Koundé hit the bar from a Joan Jordán corner just minutes after that initial effort.

The Sevillista dominance of the match did not stop after the goal, as Julen Lopetegui's side did not allow the Italian outfit to even get near Bono until the half-hour mark, when a rebound in the box fell to Zaniolo, but his effort was deflected wide for a corner. Jesús Navas went close a few minutes later, after a wonderful threaded pass from Fernando played in the captain, but he was unable to control the ball as Pau López rushed out. However, Sevilla would double their lead before the interval with a sensational team goal. Diego Carlos won the ball back, Joan Jordán fired the ball forward to Ocampos on the right wing. The Argentine hurdled the challenge from Ibáñez, the last man, and broke into the area to set up En-Nesyri, who easily finished to extend the lead.

Sevilla did not allow Roma to get back into the game, with a top-class defensive performance

AS Roma did come out in the second half looking for a goal to get them back into the encounter and they did go close early on with a low, long-range effort from Mkhitaryan, which went narrowly beyond Bono's left hand post, and Cristante also had an effort blocked by the Sevilla backline. The Blanquirrojos sensed the danger from Paulo Fonseca's side and looked to finish the tie off, with a lovely move between Banega and Ocampos setting up the winger for an acrobatic effort which was saved by Pau López. Dzeko also went close with a powerful effort, just before Koundé had a goal ruled out by VAR, as he had strayed just offside as Munir crossed the ball in.

Roma's hopes of mounting a comeback became less and less likely as time went on, but Sevilla were the more likely side to score. They twice went close late on as Banega hit the bar from a free kick and Koundé saw a close-range chance well-saved by Pau López. All in all, a dominant display. The Nervionenses will play their quarter final on Tuesday, against the winners of Olympiacos vs Wolves.

REFEREE: Bjorn Kuipers, from the Netherlands. Yellow cards for Kolarov, Diego Carlos, Pellegrini, Jordán and a red card for Mancini.