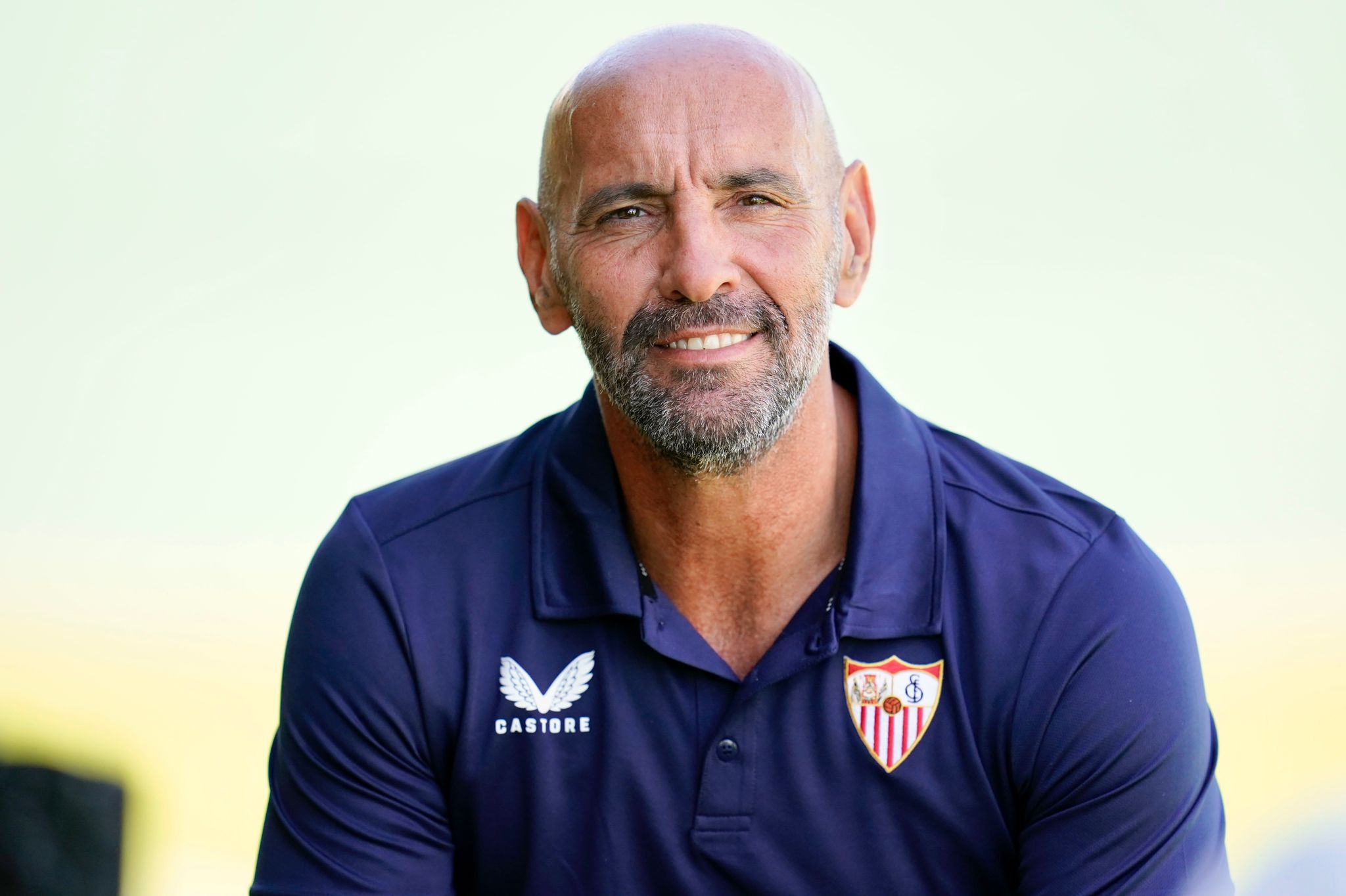 MONCHI: "BARCELONA'S OFFER FOR KOUNDÉ WAS THE BEST OFFER"

Entradilla
The Sporting Director spoke about pre-season preparations, as well as incomings and outgoings
Cuerpo Superior

Monchi sat down for an in-depth interview with Sevilla FC Official Media today, ahead of the team's flight to London this afternoon for a pre-season double header in England.

The Sporting Director was speaking for the first time since the agreement in principle with FC Barcelona for the transfer of Jules Koundé, and he wished to explain what happened in the days preceding the agreement.

"Pending his signing, while he's undergoing his medical which should be all ok, this is a story I'd like to tell calmly."

"We have a business model that has enabled us to be where we are, achieve what we have achieved and to grow like we have grown. By generating capital gains from purchases and sales, we have a squad well above our operating costs."

"In the last few years we've only made one big sale, Bryan, and we rejected bids for Koundé and Diego Carlos. This year we had a problem, because changing the model a little meant that we had a situation that wasn't chaotic, but it was more complicated, and we had to sell Diego Carlos and Jules."

"There were more suitors for Koundé at the beginning of the market than at the end, and above all, the one who has stayed is Chelsea, who in the last month have kept us busy and negotiating to the point that last Thursday we reached a verbal agreement and so did the player."

"Football never ceases to surprise you. Chelsea began to have doubts and pulled out. They didn't doubt Jules' quality but his place within the squad."

"Everything stopped over the weekend, and then Barcelona appeared. It's important to mention this, but the first time Alemany got in contact was on Monday. He showed his interest in signing Koundé."

"We received an offer that was lower than what we had in mind, but we renegotiated with them and reached an agreement for a club-record sale".

"You have to negotiate in difficult conditions. We had to sell, and we had the sword of Damocles hanging over us, as he had two years left on his contract. This would have been the third time we'd have told Jules no. He's a professional but you have to consider the person as well."

"It was a very good offer, and without payments to intermediaries. Whether we like it or not, the market sets the guidelines and dictates the prices. The offers we had two years ago from Manchester City, last year from Chelsea and this year from Manchester City and Barcelona were for the same amount."

"We are a club that has a business model and we cannot ignore the fact that it is based on selling and generating capital gains. We don't have to sell everything and for two years we decided not to sell, but this year I think we have sold with the best possible offer."

"Chelsea began to have doubts and pulled out"

"On Thursday night Koundé was ‘sold’ to Chelsea, for a fee accepted by all parties. They began to have doubts and pulled out. Due to situations that arise sometimes, no matter how long you've been in this world, there was some movement at Chelsea that made them doubt whether they needed a player with Koundé's profile."

"They waited a bit and that wait went on until Barcelona appeared. Chelsea came back again, but Barcelona's offer was better. When you have two options on the table, you play with them and the player was satisfied with going to Barcelona, with better conditions for our club."

"Barcelona's offer was the best offer and there will be an AGM where everything will be explained in detail."

Monchi also addressed a belief among the fanbase that they were strengthening a direct rival.

"I understand the comment. For me, Sevilla are the best club are in the world, a long way clear of second, but I also have to be coherent. Being direct rivals of Barcelona is a very nice idea, but they go into every season with the idea of winning everything they play for."

"We are ambitious, proud, we never hide from aspiring to the top, but we're on a different rung of the ladder. They can buy one of our players and other players for a significant amount of money."

"I admit that, with our rebellious and ambitious character, we can think we are rivals of the top three, but we don't set out with the same objectives. We are a business and we can't think about emotional issues in such important matters for the viability of the club."

"We are no different to Villarreal, Betis, La Real... but we are in a different position. We have grown because we have entered the Champions League for the first time three years in a row, and with a title during that time."

"We'll keep growing and climbing the ladder one step at a time. Now it's time for the difficult part, which is investing what we can from what we have brought in, so we can maintain our competitive level."

For the Sporting Director, in order to grow, you have to sell.

"Look at our current squad. That's called growing. There's room for improvement, of course, like every squad, but it's a very competitive one. Despite everything that happened last year, we comfortably reached the Champions League. It's our model and we can't have others."

"We have 200-220 million euros, that's it. Our squad costs 198 million, in which I'm sure there are lots of mistakes that we are trying to alleviate with the players we have. I'm not stupid and, out of respect to those players, I won't name them, but I take responsibility for those mistakes and I analyse both my work and my staff's work. It's generally positive but there are shortcomings."

"We've always sold players and we've always grown, there's no other model. Our ordinary revenue doesn't give us enough to maintain the squad. We use a model that would get you kicked out after two minutes if you explain it at Harvard, but we've been like this for 17 years."

"Beyond the occasional moment of dissatisfaction, the fans have to appreciate what we have achieved. We'll keep following this model."

"We now have an important challenge, strengthening at centre-back and left-back"

However, after two key departures, it's now time to bring in reinforcements.

"We now have an important challenge. The most pressing matter is strengthening at two positions that have become a bit weak, centre-back and left-back."

"We'll work and we'll try to be as efficient as possible with the limited investment capacity we have, but we need to bring in a centre-back and a left-back as soon as possible."

"Hopefully next week those positions will be covered. There are names, there are some movements that are already underway, but nothing is confirmed yet. However, we've come a long way and they are players that will allow us to maintain our level."

"At that point, we'll check our salary cap and profit and loss accounts, but we'll keep working hard to have the most competitive squad possible on 31st August. I know two important players have left, but I have confidence in my work, the squad, and I believe that there will be players this year who were not able to contribute as much last year."

"With those who are joining, and the coaching staff, I think we'll be up there fighting for our objective of Champions League qualification. If I'm convinced about a player, I prefer to wait and not rush because the season is very long."

We hope that the negotiations that have started will come to fruition in the next few days and that we can bring the players in."

"It's good to see intensity, high pressing and winning the ball back quickly"

Monchi then commented on pre-season and injury news.

"We've had a few positive, productive weeks, and that's aside from the good results. Draws against Champions League teams and a comfortable win over a Ligue 1 side."

"Aside from that, they're feeling good, they're recovering that had been left in the dark in the past and it's good to see them come back, such as intensity, high pressing and winning the ball back quickly."

"We've returned to that a bit, it's exciting and now we have the most important part of the pre-season in England, the Antonio Puerta Trophy, and then the opener against Osasuna."

"Marcão had a hamstring injury at the end of last season and didn't train for a month. His muscle felt it as the workload increased, it's nothing serious. As it's not urgent, if everything goes normally next week he'll join the group and on the day of the Antonio Puerta Trophy he should be ready to play. It's a little injury, but we don't want to make mistakes from the past."

"It's the same for Rafa Mir, he will be out resting for a week." 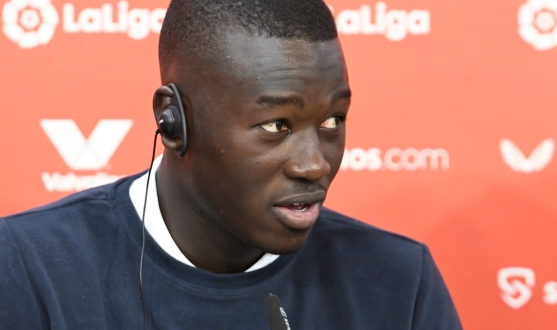 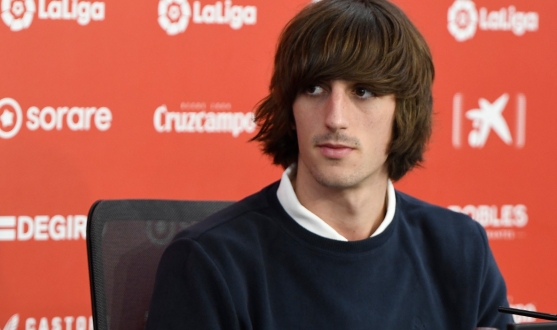 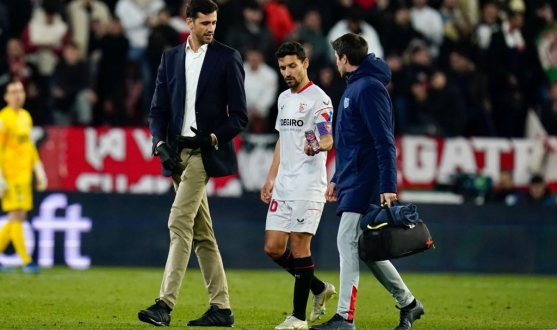