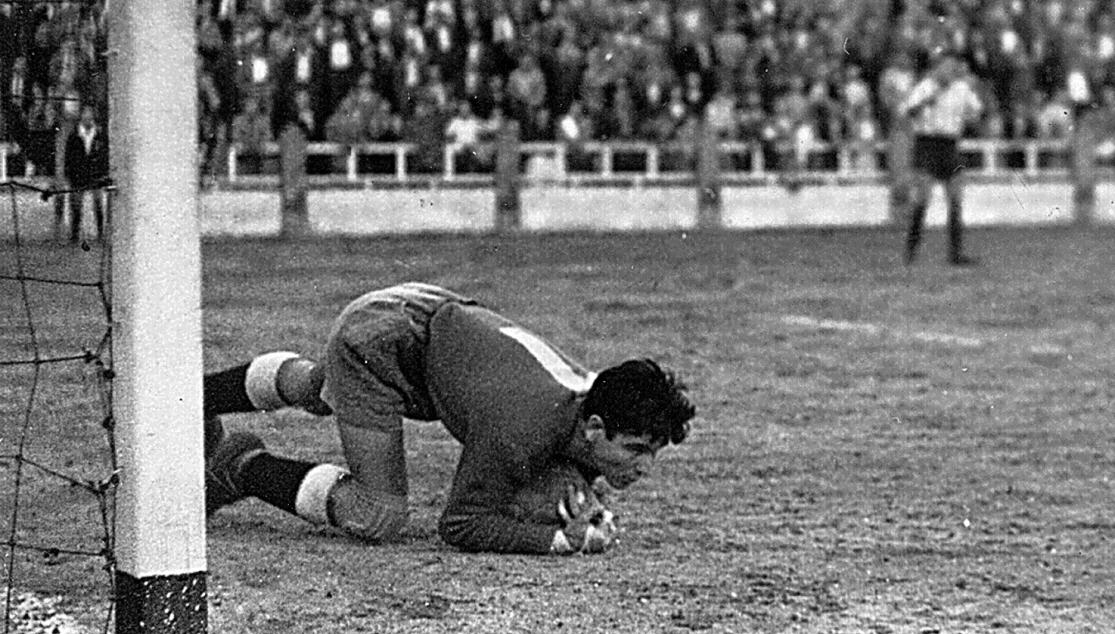 There won't have been many who recognised the name in the title; therefore, this article will help you get to know him. His stay at the club was short-lived, and it happened many decades ago. Guillermo Manuel Dellepiane Narváez - born Guglielmo Emanuele - is not your everday character. What makes him special? Firstly, all that will be recounted here is from his memory, and at 88 years old he is able to remember with incredible accuracy a lot of what has happened in his life. Next, he speaks, with ease, various languages: Italian, English, French, Portuguese, Catalan and of course, Spanish. Delving into his academic history; he studied Naval Engineering, Philosophy and Law. Likewise, he is the chairman of the veterans of the club and, his life, as was stated in the beginning, is one big adventure.

Born in Cádiz in 1930, when he was very young he moved to Nervi, in Italy, where his father was from. He lived there until he was six years old, and then returned to Tacita de Plata just a few months before the start of the Civil War. Due to the situation, his parents sent him to study in Tétouan whilst the war was taking place. It was there, in Morocco, that he first played football. He played as a goalkeeper at the start as he wasn't as good with the ball at his feet. From that moment, he fell in love with his position.

Although he was born in Cádiz in 1930, he soon moved to Nervi in Italy, his father's homeland

He returned to Cádiz, and along with his brother and his cousin, he was introduced to football at the elite level. He spoke greatly about the goalkeeper who played for the team in yellow, Manuel Bueno, and ex-Sevilla player and father of another one of the club's veterans, Manolín Bueno. From that point on, Guillermo's obsession with being a 'keeper began, and he ended up idolising Manuel Bueno; to the extent he would turn up to games in a grey jersey, just like the one worn by Manuel. His first serious contact with the game was in a local league originating from the Frente de Juventudes. Here, he played for Fernando Santos, the bottom team in the championship. However, depspite this, Guillermo stuck at it. It was there that he was first called by the nickname, Nené, something that stuck with him for many years. -+

Two years later, when he was 15 years old, he joined a team which had just been formed, Levante CF from Cádiz. In his stunning rise to the top, he signed for CD Hércules Gaditano, reserve team of Cádiz CF who played two leagues above where he came from, during the 1949/50 season. He got to play in different places such as Utrera, Coria, Jerez, Marbella, Granada, Almería and even Tétouan. The team were champions at the end of the season, gaining promotion to the Third division. However, Cádiz CF took the decision to not make the promotion effective and they gave up their spot. As a result of this season spent in the first team at Cádiz CF, who had at this time goalkeepers such as Braulio Rubio and Santos, and although he never nailed down the number '1' spot, he gained the interest of Lérida. This persuaded him to move to Cataluña and here, he met a teammate and moreover, a friend for life: Sergio Del Pinto.

On his return home, he spent time with many clubs from Cádiz, until signing for Lleida

He stayed at Lérida until 1953. On the road, he played a brilliant game against Real Madrid. His spectacular saves made Celta de Vigo and even Real Madrid interested in him, who wanted to get in before Celta and secure his services. The season ended and they invited him to stop off in Madrid on his way back home to where he spent his summers. Guillermo accepted the invitation and tried out with Real Madrid. In Madrid, he had major competition with 'keepers such as Domínguez, Juanito, Cosme and Adauto.

It was here as he left the dressing room, that he was approached by a man wearing a raincoat and a hat, and asked him to sign for his team instead of Real Madrid. This mysterious man turned out to be Don Ramón Encinas, technical secretary of Sevilla FC. And so, he did. In Sevilla, Guillermo felt at home and signed in the 1953/54 season. Alonso, Araujo and above all, Arza took him in like a brother. The city of Sevilla also gave him the opportunity to further his studies, and he got his teeth into Mathematics. In addition, a director intervened so that he could study in the studios/workshops in Junta de Obras del Puerto. Everything seemed to becoming very clear to Guillermo.

After his stop-off in Real Madrid, Ramón Encinas convinced him to sign for Sevilla FC

However, on the football field, everything was very different. His great defender, Encinas, moved on quickly. Guillermo Campanal, the coach who was there when he arrived, was replaced by Helenio Herrera. Dellepiane didn't manage to get along with the eccentric Argentinian manager, because the manager didn't like the fact that he played so far out of the 'D' - as he was used to the goalkeeper pretty much staying on his line. This poor relationship marked the transformation of the goalkeeper at the club. Meanwhile, Guillermo played in numerous friendlies, and he remembers playing in Ronda and also in Recreativo de Huelva. Dellepiane was waiting to make his official debut, a moment which never came.

He saw an opportunity after a game between Valencia CF and Sevilla FC, when Manolín Torres got injured and he had to substitute Busto. The situation was favourable and in the next game, where Real Madrid would travel down to play Sevilla, Guillermo entered into Helenio's plans. But this didn't happen, and the manager ignored him, sticking with Manolín - who was still injured. The goalkeeper, as expected, suffered a massive setback. This all led to a boiling point between the player and the manager, and it exploded a week later after an altercation between the two in the proximity of the Club Secretary, at that time on San Miguel street. The situation was irreconcilable.

He wasn't able to make his official debut, even though he did play in some friendlies with Sevilla

Ramón Sánchez-Pizjuán called him into his office and gave him the bad news: "Guillermo, you're the only university student that I have in the team and you raised your hands to the coach. I have to tell you that you must leave". There was no way back. Dellepiane left for CD San Fernando to be closer to home and his family. He would stay at the club until the 1955/56 season, when he decided to hang up the boots. However, he didn't completely walk away from football, and he ended up, in the 90s, becoming provincial representative for Cádiz in the Colegio Andaluz de Entrenadores. Since his retirement he has followed another passion in his life, ships, putting into practice what he had studied and prepared himself for. His profession led him to live in the United Kingdom, Netherlands, Brazil, Argentina and Uruguay.

Today, Guillermo recalls with affection those youthful years in which he had the opportunity to rub shoulders with football's elite. He regrets his unfortunate end to his time with Sevilla, at a time where he would have been proud to have worn the colours of Sevilla. Today, we are sharing this testimony - one which is filled with unimaginable value.