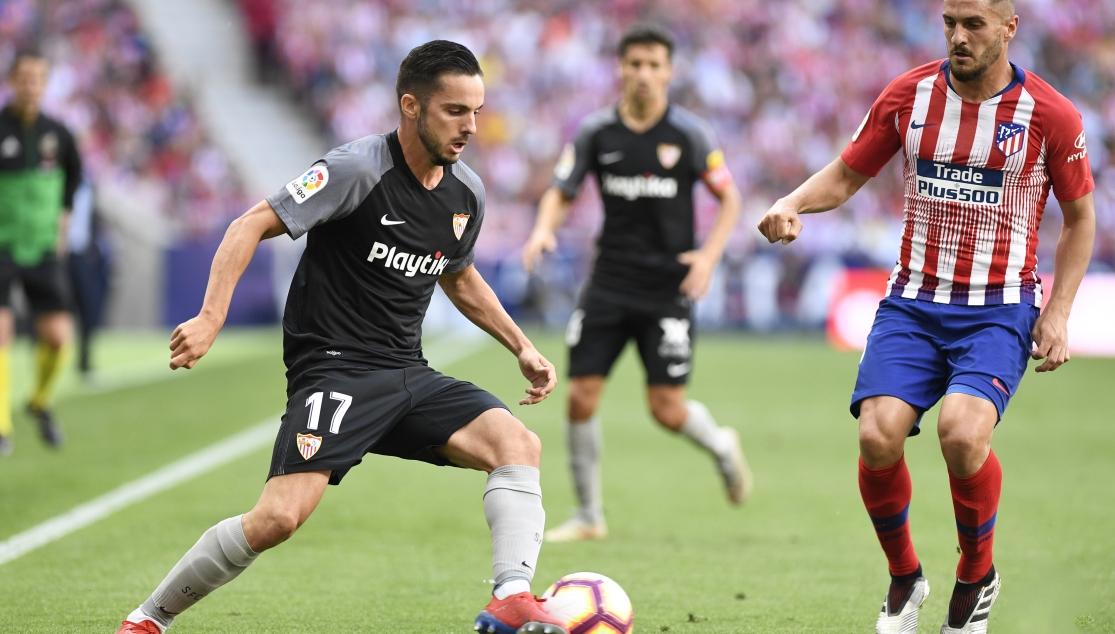 1-1: SEVILLA IMPROVE TO LEAVE IT ALL TO PLAY FOR ON THE LAST DAY

Sevilla take a point away from the Wanda and could have even got the win at the end; the draw keeps the possibility of finishing in fourth alive

Mixed feelings for Sevilla after Sunday's draw in Madrid. They really needed a win to keep pushing for fourth place; a draw leaves things up in the air but it is still mathematically possible. Sevilla improved during the game after a poor first-half, they were better than Atlético following Sarabia's equaliser. They had chances to win but the draw means that the team must pick up at least a point on Saturday to avoid having to play Europa League qualifiers.

Atlético had nothing to play for other than to increase their advantage in second place but they were never going to be complacent in their last home game of the season. This was confirmed after only two minutes when Simeone's team had a chance from a corner, before Morata had an opportunity. Sevilla played a slow game, searching for Franco Vázquez to control the game. The Argentine had a chance after a break, Sarabia finding him in the box and forced Oblak into turning the ball around the post for a corner. It was not the most fast-paced match played today but, after the 15/minute mark, Morata would have another chance which Vaclík did well to save.

Goals began to arrive in the other matches and Athletic's result meant that Sevilla would have to push on to avoid the risk of falling into seventh place on Saturday. However, after Morata had a goal ruled out for offside, Atlético would score a fortunate goal. Koke, under no pressure, moved forward with the ball and looked for Thomas' run. The ball deflected off Kjaer, sending the ball into the net with Vaclík unable to do anything. Shortly after, to make matters worse, Gonalons' picked up an injury and had to come off for Amadou. Kjaer denied a second goal through some good defending just before the break.

Kjaer fell ill during half-time and had to be replaced by Vidal, meaning that Gnagnon moved into central defence. Atlético would have the first chance of the second-half, Thomas sending just wide after a pass from Griezmann. Sevilla could not get into the game and needed more intensity to worry Oblak, whose team could have killed the game when Correa had the ball in the back of the net but it was ruled out for offside.

There were fifteen minutes to go and Sevilla knew it was time to attack. With second place secured after Real Madrid slipping up at the Anotea, Atlético no longer had anything to play for. Vázquez crossed the ball to Sarabia who met it on the volley and the ball took a touch off Montero which kept it out of Oblak's reach. Shortly after, Sarabia had a chance to win the game but he sent his shot in the box over the bar.

With Amadou and Rog providing thrust in midfield and Aleix pushing down the left-wing, the team pushed for the victory and found themselves constantly in Atlético's half. In the end, a well-earned point but it's not what the team needed to keep fighting for their objectives. The team now need Valencia and Getafe to lose next week to have any chance of finishing fourth.