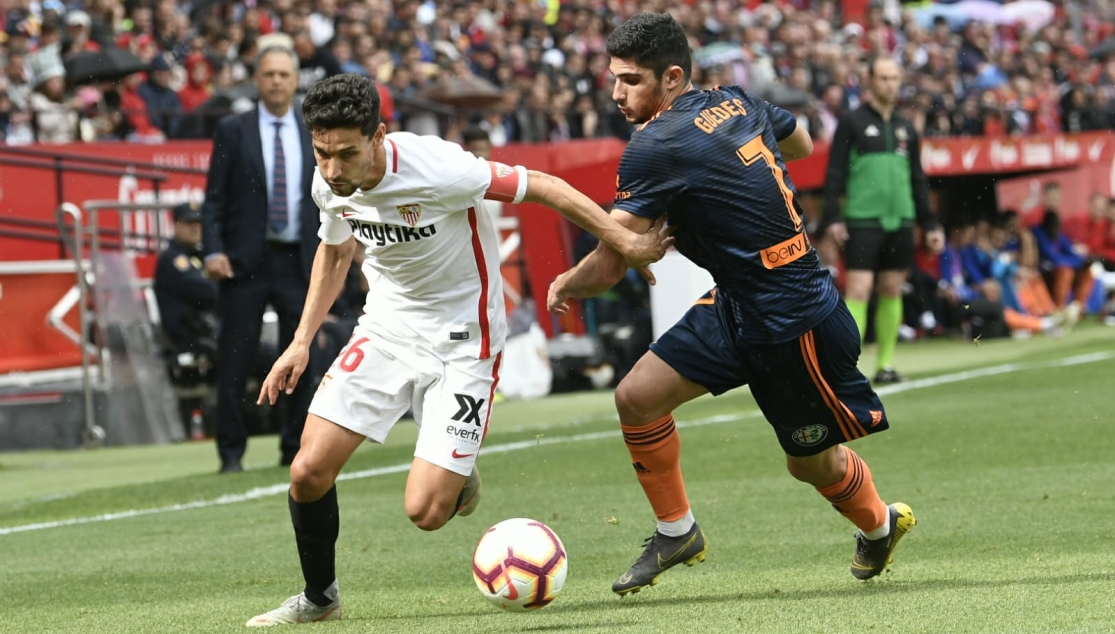 0-1: VALENCIA TAKE THE INITIATIVE IN THE RACE FOR FOURTH

Sevilla were defeated this afternoon in a key game against Valencia, with Valencia scoring from the penalty spot just before half-time. Sevilla could have got the equaliser in the closing moments after Gonalons fell in the box and then had a goal ruled out.

A tough defeat for Sevilla FC this Sunday against a direct rival in Valencia. After a strong first-half from Valencia, getting their reward from the penalty spot, the team pushed but could not find the equaliser. To make matters worse, Sevilla were denied a penalty and a goal in the dying minutes. The result makes the fight for the fourth spot even tighter with nine games to go.

Sevilla started off on the front foot, attacking Neto's goal. However, this initial push wore off as the minutes went by and Valencia began to take control: not in terms of possession but in the danger they created on the counter, making the most of every break with Gameiro and Rodrigo's pace. Despite this, the debutant Javi Díaz did not face much trouble until the referee called for a free kick. Fortunately, Parejo sent it well wide. Sevilla tried to attack down the right through Navas but they struggled to get clear chances, while Marcelino's men had their luck on the counter. Gameiro and Guedes had good chances but Sevilla's defenders came out on top.

Mercado was forced off through injury on the half-hour mark

Sevilla's first chance came through Munir, who after a good dribble from Promes managed to get a shot off. Neto was up to it and dove down to keep the scores level. Valencia continued to be dangerous on the break and they nearly got the first goal of the afternoon when Carlos Soler broke into the box but his cross did not find anyone. The opener arrived just before the break when Banega fouled Gaya in the box, with Parejo scoring from the spot.

Caparrós made a change at the break, bringing Vázquez on for Amadou. Sevilla pushed for the equaliser but they were against a strong Valencia in defence. Although Sevilla had the best chances in the second-half, Gameiro struck a powerful shot against the crossbar, with Javi Díaz getting a vital touch on it. Quincy Promes was enjoying success down the wing and sent in some dangerous crosses. First, Vázquez send a header over and then Banega could not finish from outside the box.

The minutes went by and Sevilla kept looking for the equaliser. Marcelino's team continued to be dangerous in parts, however they preferred to defend deep with Gameiro off the pitch and Rodrigo dropping back. After a clear foul that was not given, Wöber picked up an injury but had to continue playing as all three substitutions had been made. In the final minutes, Sevilla were denied a penalty and then had a goal ruled out for offside, bringing a tough game to a close that was decided by small details.

A tough result for Sevilla who could have went fourth today with a win. Now they find themselves seventh in the league in a very tight battle for Champions League football. There are nine matches to go and another direct rival in Alavés comes to the Sánchez-Pizjuán on Thursday night.

First team
THE BANEGA FAMILY, WITH THOSE MOST IN NEED IN ROSARIO DURING THE PANDEMIC
Leer más
END_OF_DOCUMENT_TOKEN_TO_BE_REPLACED