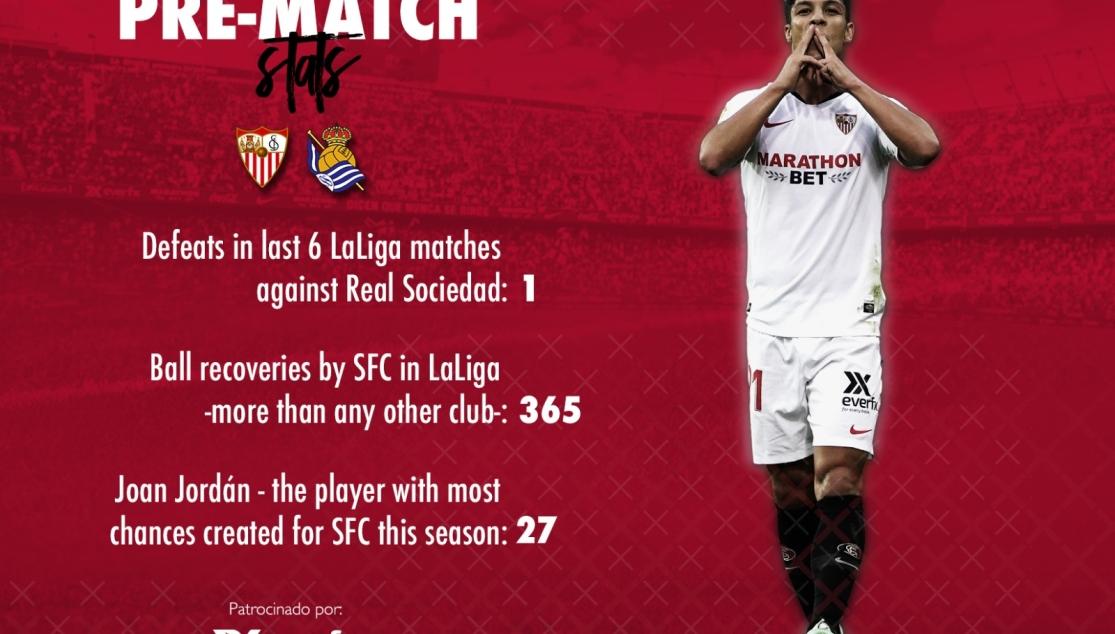 SEVILLA LOOKING TO GET BACK TO WINNING WAYS AT HOME

When playing football, you have to learn to move on quickly and even more so when the fixture list is as packed as this. After the excitement of welcoming Real Madrid as leader of La Liga and starting off on the perfect foot in Europe, just a week later a lot has changed in Sevilla FC, after two defeats out of two against Madrid and Eibar. However, football is a sport that forces you to just focus on the next game at hand, something that Sevilla will do now.

Two games played at home, and no victories is something unusual for Sevilla FC, who will come up against a Real Sociedad team full of confidence. In the games played at home so far, Sevilla deserved the win against Celta and might have felt hard-done-by to not have taken anything away from the Madrid match. In the third match at home this season, there are no excuses, even if they are coming up against one of the most in-form teams in La Liga.

Julen Lopetegui will wait a few hours until he announces his squad. We know for certain that this will not include Daniel Carriço, who is injured for the game against Real Sociedad. As for the rest, it is still to be seen whether Lopetegui persists with a similar team or makes changes with Thursday night's Europa League match on the horizon.

As for the recent meetings between the two sides, in the last six games, Real Sociedad have only won once. However, it's the statistics of late that Imanol Alguacil's troops will be encouraged by as after the international break, they have won three games on the bounce. Two of these wins came at home against Atlético de Madrid and Deportivo Alavés, with the other coming in between them at Cornellá-El Prat.

If they win tonight, Real Sociedad will lead the way at the top of the table on their own

Now, after the Madrid derby where neither team could take advantage, Real Sociedad are hoping for none other than sitting at the top of the pile on their own if they win in Nervión. On the other hand, if it is Sevilla who walk away with all three points tonight, they will be level on points with FC Barcelona and tonight's opponents; returning to the European spots in the process and sitting only two points behind the leader. Even after only seven games, it will give a fair indication to how the league is shaping up for the months ahead.

Javier Alberola Rojas will be the man in charge tonight. He will come back to Nervión for just the second time, after taking charge of last season's demolition of Levante UD (5-0). This will also be the first time he takes charge of a Real Sociedad game this season. Eduardo Prieto Iglesias will be in charge of VAR.