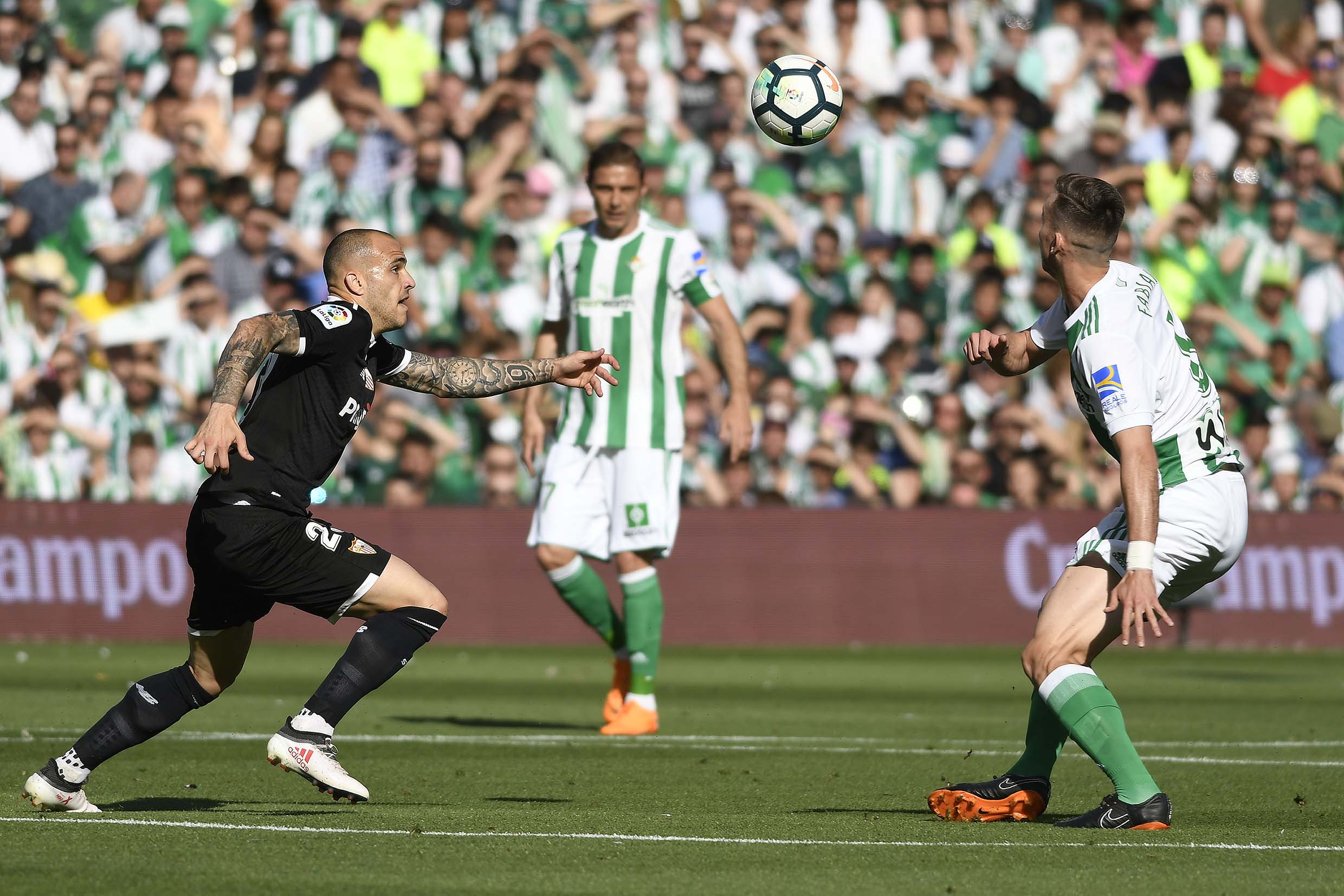 2-2: VICTORY SLIPS OUT OF THE HANDS BUT SEVILLA SECURE EUROPEAN FOOTBALL

Entradilla
Sevilla fought tooth and nail in a hostile Benito Villamarín this Saturday evening to guarantee European football for 2018/19. Drawing 2-2 on rival soil, the Nervionenses – if anything – came away unlucky to have picked up just a point. With Getafe losing, however, the European objective is achieved
Cuerpo Superior

Sevilla were on the verge of their third successive La Liga victory this Saturday night but would see three points snatched away at the death. Having done all the hard work to cancel out Bartra's early opener with just under fifteen minutes to go (Ben Yedder and Kjaer scoring for the visitors), Loren would find an equaliser and force the to Seville sides to share the points. Getafe's loss to Atlético Madrid means that a point is enough to guarantee European football for Sevilla - with a seven place finish now confirmed.

Sevilla could not have wished for a worse start. Playing in one of the most hostile settings they’ll face, the Nervionenses were unable to challenge Betis’ early dominance in possession. Taking control of proceedings in the very early going, the green and whites were awarded a dangerous freekick on Sevilla’s right-hand side just before five minutes had passed. A perfect ball from Joaquín would find the head of Bartra, who nodding to Soria’s back post would give Betis an opener. Stunned by the early setback, Sevilla would continue to struggle to break into the game. Enduring more pressure before the fifteen-minute mark, it would only be following a speculative strike from Éver Banega that the Sevillistas would find their feet. Nolito would follow up with Sevilla’s best chance of the early going – latching on to a ball over the top but failing to get the height needed for a lobbed header.

Struggling to contain Betis' dominance in the early going, Sevilla would eventually grow into the game

With affairs now more even, the bite you would expect of a Seville derby started to rear its head. Bookings for Guardado, Sarabia and Lenglet put the Benito Villamarín even more on edge. The visitors, nevertheless, grew more comfortable. Banega would be the next to fire a warning shot, dragging just wide on 25 minutes. With Betis chances drying up dramatically, Sevilla started to press – nicking the ball high up the pitch but lacking a final pass to give themselves true chances. Despite the unrelenting wall of Betis noise, Sevilla would have the ball in the back of the net just under ten minutes before the break but Pablo Sarabia would not see his finish count, being found offside by the linesman. Minutes before the referee called the action to a halt for half-time, Sevilla would be forced into a change, with Mercado coming off through injury for Wissam Ben Yedder. One goal back going into the second-half.

With half-time changes for both sides – Layún on for Sarabia for Sevilla – the Nervionenses would restart with their tails up. A wondeful Steven Nzonzi tackle followed by a floated ball from Ben Yedder would set up Nolito for an early chance, though he would fire whiskers wide of the far post to finish off the counter-attack. Replicating Betis’ early first-half dominance, Sevilla took possession for their own, setting up camp in the hosts’ half. And Sevilla would be rewarded for their efforts. Scoring with a true poacher’s effort ten minutes after the restart, Wissam Ben Yedder would be the quickest to react to a loose ball inside the green and whites’ area, poking past Pedro to find the corner of the net. Looking to respond immediately, Betis would draw incredible defending from Clément Lenglet minutes later, as the Frenchman made an unbelievable last-gasp challenge to deny the hosts.

Sevilla would be rewarded for their hard work when completing a richly-deserved comeback. Unfortunately, the win would be snatched away

As the minutes wore on, Sevilla looked like the only team like scoring. Giving Betis nothing and fighting for every ball with heart, Caparrós’ men would go tooth and nail to find a second. And that second would eventually come. After tireless work from Steven Nzonzi, Sevilla would win a corner with under fifteen minutes to play; swinging the ball in short, Banega would find the heel of Wissam Ben Yedder – who flicking on perfectly to the centre of the box, would find an unmarked Simon Kjaer, who was there to hammer home and send Sevilla’s travelling fans into ecstasy. Unfortunately, the well-deserved lead wouldn’t last. With just ten minutes to go, with what was more-or-less their only true chance of the second-half, Betis would equalise through Loren – scrambling the ball home after an initial save by David Soria.

An unlucky draw for the visitors, though with Getafe losing, it’s enough to carry the Nervionenses to guaranteed European football for the 2018/19 season. Having come to the Benito Villamarín needing at least a point, Sevilla leave with enough in the bag to secure the European objective. Going into the final game of the season this Saturday against Alavés, Caparrós side can now play with pressure off, though the Nervión faithful will undoubtedly demand 100%.