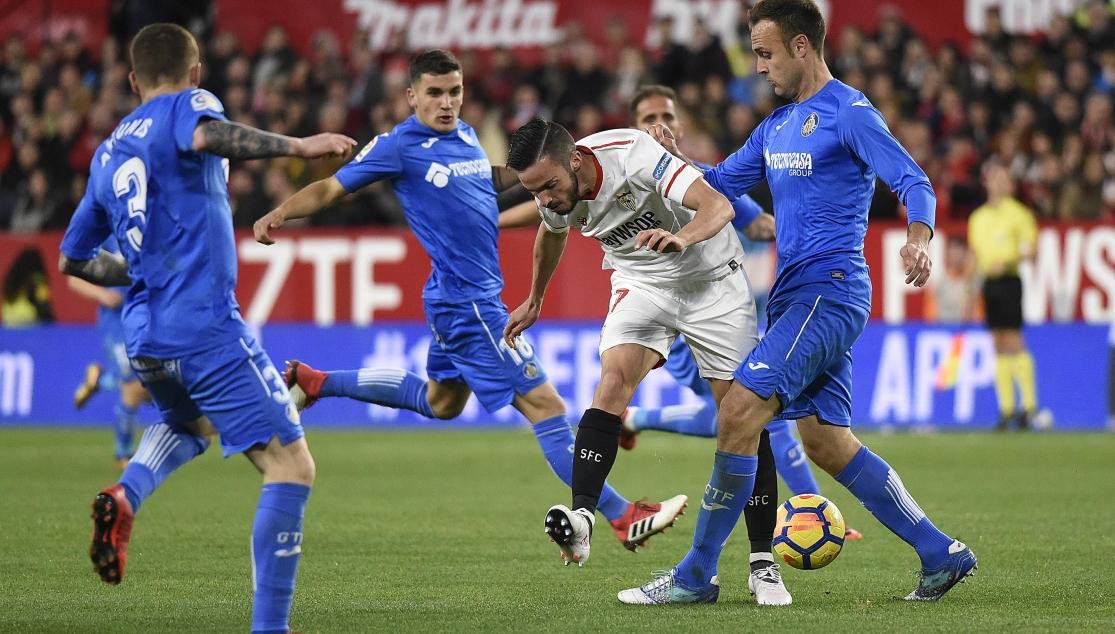 Sevilla FC were only able to get one point this Sunday against Getafe, who made life very difficult over 90 minutes. Though Muriel did the most difficult job by breaking the deadlock in the 72nd minute, four minutes of stoppage time would prove fatal for Montella's side, with Ángel taking advantage of a contentious rebound to beat an indignant Sergio Rico and making it 1-1 at the death

It didn't start comfortably and the very same discomfort would rear its head at the death of the game. After finally breaking through the organised Getafe back-line with a goal from Luis Muriel 20 minutes from time, it seemed Sevilla FC had their fourth consecutive victory in the bag; however, a controversial decision in added time would see the Madrid-side grab an unfair equaliser which means two dropped poins for Montella's men. A tough pill to swallow which leaves Sevilla now looking focus all their energies on the Copa del Rey this Wednesday.

From the start of the match it was already clear things would be different from wins against Atlético and Espanyol. Unlike those sides, Getafe took no risk and forced Sevilla to go out on a limb looking for three points. The blues remained camped in their own half waiting for any mistake to pounce with the pace of Amath, Ángel and Gaku on the counter. And the visitors did just that in the early stages of the first-half, though not with quite the danger to Sevilla's goal. With that being the case, nearly half-an-hour passed before real opportunities appeared.

In the 24th minute Amath had 0-1 at his feet but was thankfully unable to find the target. Antunes would try a shot from the centre shortly after and Sevilla were in need of a reply. Ben Yedder - the main change to the starting eleven - would come closest, diving to head Jesús Navas' fizzed cross just centimeters wide. Sevilla were showing more impetus and on half-an-hour would be denied a big penalty shout when Sarabia headed against a Getafe defender's arm. Alberola Rojas saw no wrongdoing and the first-half would draw to a close with the Nervionenses frustrated by both the officiating and the Getafe's defence.

The second-half didn't see much change in the pattern of the game - if anything, Getafe came out tighter and less adventurous in attack. Montella looked to inject pace by replacing Ben Yedder - who was unable to make the most of the chances he had - with Luis Muriel. Not minutes from coming off the bench, the Colombian already showed his intent to make a difference, persistently battling to create a chance for Sarabia, who headed inches wide. The Nervionenses were now clearly on top and Montella would look to the bench again: an exhausted Franco Vázquez giving way to Nolito.

Just four minutes later, Sevilla would finally get their reward. Nolito managed to find space between Getafe's defensive line and picked out Sarabia with a cutting through ball. The winger, with space, would find an on-rushing Muriel, who had a golden chance to find the first goal. And the sub would do just that, stabbing the ball past Guaita and giving the home side a well-deserved lead. With just 15 minutes to go, it seemed as though Sevilla had done the most difficult job but with four minutes added to the game, a blow would come to snatch two points out of the Nervionenses' grasp. An ariel challenge from Cala on Sergio Rico would leave the Sevilla keeper unbalanced and would see the ball drop to Ángel in the ninety-third minute. With the goal gaping, the Getafe forward couldn't miss and Getafe had snatched a draw.

Two lost points at the Ramón Sánchez-Pizjuán when a draw seemed impossible. The Nervionenses drop further behind Villarreal in fifth place. Seven points behind Valencia in fourth, Sevilla will not be able to slip up again if they are to achieve Champions League football come the end of the season. A painful twist in the script which leaves Sevilla with no other option but to focus on this Wednesday's first-leg of the Copa del Rey semi-final and give everything they have to reach the final.