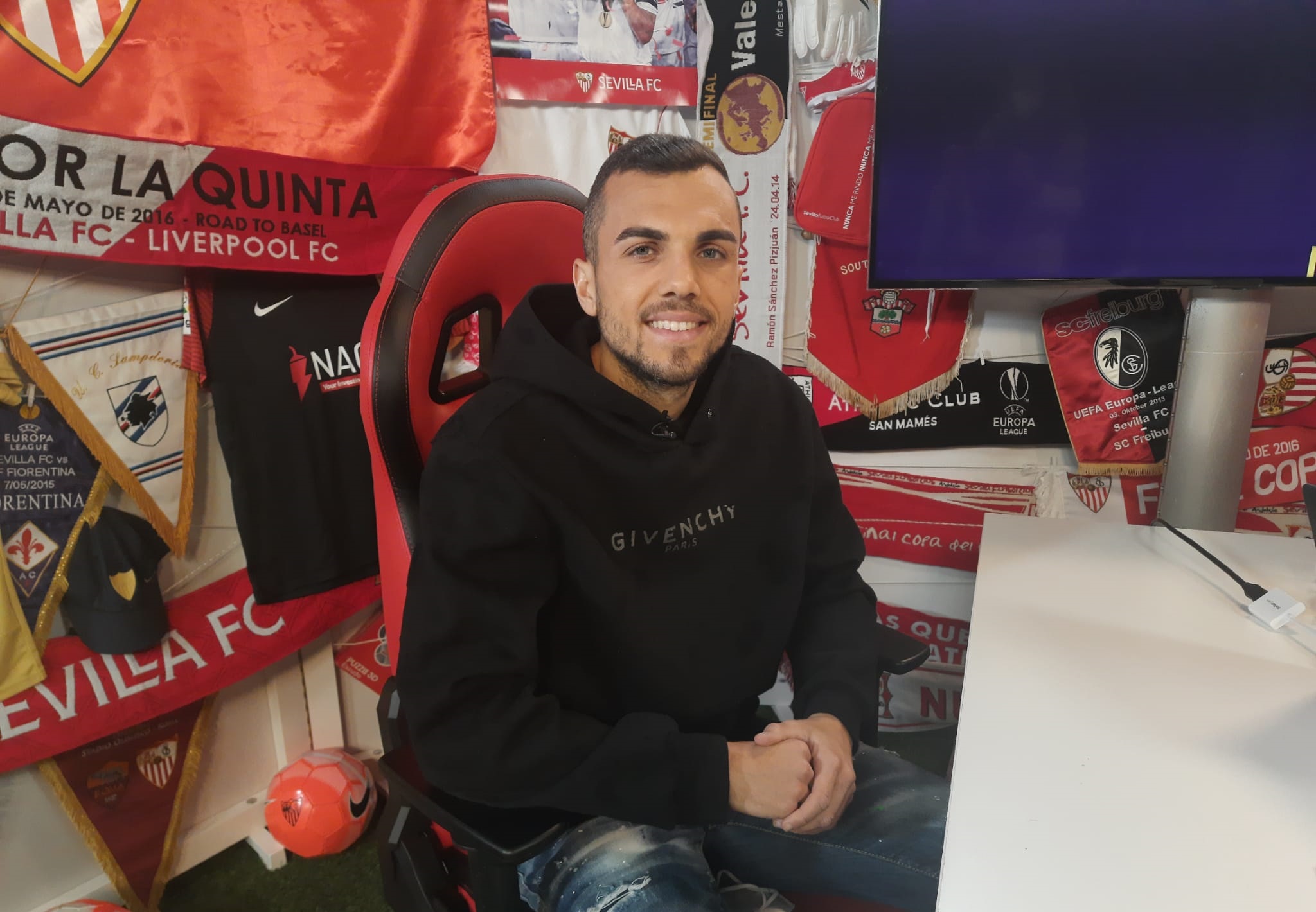 JORDÁN: "WE ARE MENTALLY PREPARED AND AIMING FOR A VICTORY. WE ARE LOOKING FORWARD TO THE GAME"

Joan Jordán was in the hot seat for 'A Balón Parado' on Thursday. The midfielder arrived at the Sevilla FC Television studies a little over 48 hours before the cup tie against Real Betis, in which he started discussing that "this week has been decent and has helped us prepare in the best way. We are looking to get to the quarter finals and we are fully concentred". In addition, Jordán wanted to send out a calm and confident message to the Sevilla FC faithful ahead of the fixture in the last sixteen: "Even when arriving at the supermarket car park, you can already feel yourself getting connected with the derby, the way the fans experience it is special. In the last derby I told the fans to keep calm, I think the team is prepared. We have some injuries, but we are mentally prepared to have a good game, we are going to leave our mark on the game and go for the win. In the world of football anything can happen, but we have to enjoy the derby. I am a passionate person, I don't usually get nervous, you get those butterflies inside your stomach and you start to get mentally prepared hours before kick-off. In a derby, you experience all of this in an incredible and spectacular way".

The Catalonian spoke about the nature of the derby as well as his own experiences: "Whenever I have family here, I tell them to come to the hotel because it is always experienced in a special way, more so on certain days. In the last game I was alone, I was close to Óliver and Marko, we were banging on the window of the bus to the fans and the feeling is fantastic. They're unique moments that you just can't miss out on... from the first whistle, I feel as though everything is in silence, more so when I was a youngster. This is what drives me, it gets me fuelled, that's why when the fans cheer us on it's great, they give us a good boost. In those moments, I've learned that I have to do my best, regardless of the atmosphere".

When talking about other topics, Jordán referred to his maturity at the club, above all highlighting the manager's presence. "With Julen, I have improved in so many areas, defensively and attacking. Julen makes me a more complete player and I don't want to lack in any area. His approach to football is incredible, you really enjoy his passion and he makes it that everyone gets the instructions. The thing that I want is for the club and the team to be the best it possibly can. The minimum that is asked of us is that we give it our all. The opportunity I was given to take another step forward here and what I have experienced makes me a Sevillista for life, as soon as I stepped in, I knew the values that the club has and I would go hand in hand, that is how I experienced it all".

Jordán, who was surprised by a video call from his ex-teammate, Sergi Gomez, talked about the importance Jordán has added to the club with which he acknowledges the player-club link and how it will be able further develop it's relationship: "I value my time here, each year we had made history even amidst difficulties and a pandemic. I am certain that this will be a great third year. We are negotiating, but for the meantime the club already know I am available and hopefully it can be sorted as soon as possible".

Likewise, Jordán had a few words to say about the sporting director and praised his frame of mind ahead of the cup tie from a personal point of view: "Monchi doesn't always give team talks, but when he does they hit home. I'll do whatever it takes to score on Saturday, it would be brilliant to get a goal. My gut feeling drives me, but normally I try to envisage a bit of the game, it's importance, the responsibility... when I think about whether I want to be a coach, I feel so passionate, I ask myself if it would be worth it after so many years as a professional. Although my body is asking me to carry on committing to football, in a way I also like Julen's approach to football, he likes to deal with on other concepts of the game and I love that".

In a message to the fans: "Wherever you may be, we will feel your energy"

To conclude, Jordán outlined how Sevilla FC is seen from an outside point of view, as well as his best and worst moment: "From the outside, Sevilla FC is seen as a huge and very competitive club and that plays very well. We are seen as a people that fight for important things that maybe isn't seen from the inside as much, but I do believe that we have earned that recognition... The best moment was lifting the Europa League and the worst was probably the return leg of the cup at the Camp Nou. We gave everything, we had chances, we missed a penalty and they scored in the 95th minute... it was a hard loss to take because we were really hopeful after the loss against Mirandés the previous year".