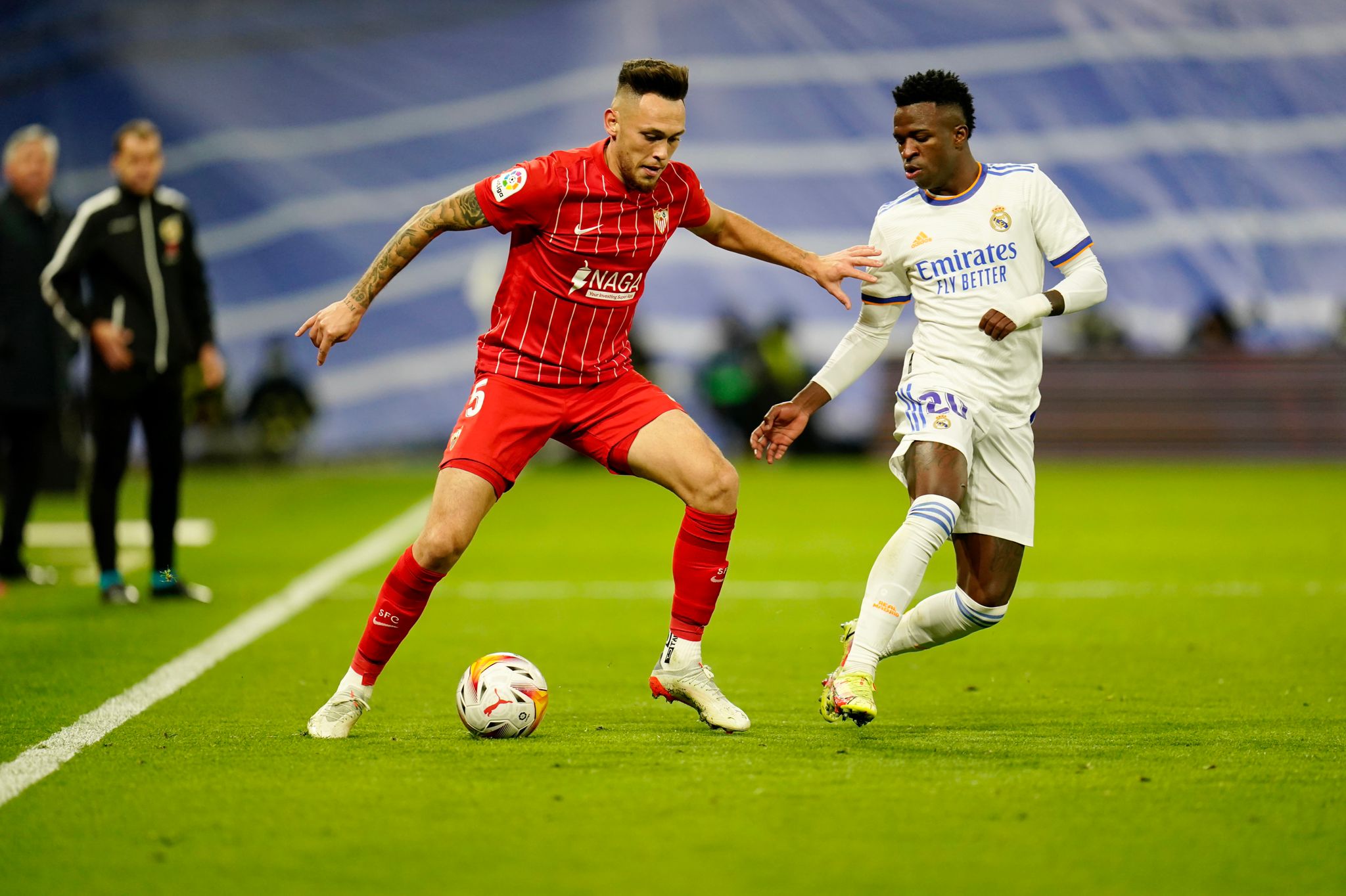 2-1: SEVILLA FC FALL TO A LATE DEFEAT AT THE SANTIAGO BERNABÉU

Entradilla
Rafa Mir scored early on, but Benzema and Vinicius turned the match on its head
Cuerpo Superior

Sevilla FC, once again, leave the Santiago Bernabéu empty-handed. While last season's trip to Valdebebas saw a late equaliser from Eden Hazard, this time it was a late winner from Vinicius to complete the comeback, denying the Nervionenses a more-than-deserved point. In the first half, Julen Lopetegui's side could have scored more than one goal, but Real Madrid found an equaliser after Bono did not push a Militao effort to safety. They then kicked on against a spirited Sevilla side and found a late winner.

At the end of the first half, the scoreline did not reflect the 45 minutes of football, with Sevilla clearly dominating at the Bernabéu. They only needed 11 minutes to open the scoring. Acuña whipped in a corner from the left-hand side and Rafa Mir rose highest to head powerfully beyond Courtois. They nearly had a second just two minutes later, but on this occasion Courtois was able to deny Rafa Mir when he was clean through on goal. The chance had came about due to a Carvajal mistake. The dominance continued, and they had another big chance to go two goals in front in the capital.

Ocampos had a wonderful solo move, getting the better of Casemiro before firing a powerful shot from outside the area, but unfortunately it cannoned back off the crossbar. Ancelotti's side had not even tested Bono, but Militao had a shot from long range tipped onto the post by Bono, when he could have done more, and the ball fell kindly for Benzema who tapped it home. That was the hosts' only chance of the half, with Sevilla again going close with a header, this time from Ocampos. That came after Ocampos had a penalty appeal turned down when he was brought down by Alaba.

Sevilla FC continued to dominate after the half-time break and controlled the game in the capital, trying to reach their opponent’s area down the flanks with Acuña and Montiel playing very high up the pitch. However, on the hour mark Asensio had a good chance for Madrid to take the lead with a left-footed shot which went wide. From this moment there were fifteen minutes of both teams attacking and defending, a sign that the game was beginning to break up with both sides looking for the win, and Lopetegui and Ancelotti began to ring the chances.

Vinicius completed the comeback for the hosts late on

In the closing stages of the game, Alaba fired over the bar after a scramble in the Sevilla area, and that happened again almost in the same two minutes later, but this time Kroos was unable to convert. Real Madrid were able to force Sevilla into their own half, and the team began to tire after a lot of effort. Unfortunately for Sevilla’s hopes in Madrid the comeback was then completed. Vinicius received a pass on the left, before cutting inside and sending a powerful effort straight into the top corner. Bono could do nothing about the Brazilian's effort.

With little time lef,t Sevilla FC tried to recover the point that they had just lost, Courtois however kept them out. A cross from Acuña, with Bono in the area in search of the equaliser, was headed by Delaney from point blank range, but the Belgian made an crucial save low down to keep out the Dane, which would ensure the three points stayed in Madrid.