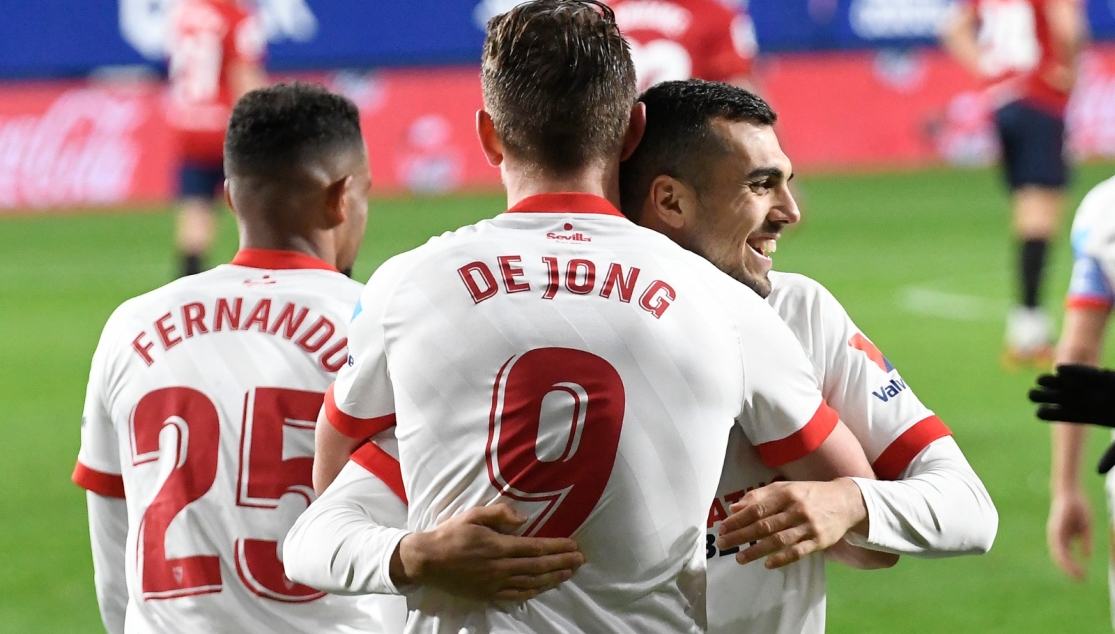 0-2: A SOLID AND EFFICIENT SEVILLA FC MOVE UP TO THIRD IN THE TABLE WITH A WIN IN PAMPLONA

Monday's win at El Sadar is the sixth LaLiga win in a row. Diego Carlos scored a header from a Jordán corner in the first half before Munir set up De Jong for the second just after the break

On Monday night at El Sadar, Sevilla FC picked up their sixth consecutive win in LaLiga. Since the defeat at the Wanda Metropolitano, the Nervionenses have taken all three points from their six league matches in that time. With a first-half goal from Diego Carlos and a second-half effort from De Jong, Julen Lopetegui's side were very solid in the capital of Navarre, and were fully aware that they were playing at a difficult stadium against a side on a good run of form. With that result, the Blanquirrojos overtook FC Barcelona and moved up to third place in the table with 48 points, and maintained their seven-point advantage over fifth-placed Real Sociedad. The Nervionenses still have a game in hand over the Basque side.

CA Osasuna came out very strong in the opening five minutes of the first half, so much so that they could have opened the scoring after just three minutes, when Oier headed Rubén García's cross from the left onto Bono's right-hand post. However, the hosts' dominance disappeared soon after, and were overpowered by a strong Sevilla FC side, who kept possession of the ball and kept getting gradually closer to Sergio Herrera's goal. Munir had the first chance for the visitors, but his drilled, left-footed shot was well-saved by Herrera.

After Oier hit the post early on, Sevilla FC took charge of the match, going in front thanks to a Diego Carlos header

Julen Lopetegui's team continued to dominate the match, and did not allow Jagoba Arrasate's side to create anything during the match. Rekik caused problems on the left and nearly broke past the defence, but the ball went out for a corner. The visitors went on to score from the corner, with Jordán's ball perfectly finding the head of the unmarked Diego Carlos. After the goal, it was more of the same from the Nervionenses. CA Osasuna tried to find an equaliser, but were unable to get anywhere near Bono's goal. There were no more chances in the first half, and the Blanquirrojos led at the interval.

However, unlike in the first half, it was Sevilla FC who would dominate the start of the second half. After just four minutes, Fernando sensationally recovered the ball in the middle of the park and drove forward, catching the hosts on the counter. The Brazilian found Munir on the left, and his cross to the near post picked out Luuk de Jong, who skilfully back-heeled the ball into the far corner, who had no chance of keeping his low effort out. Munir nearly set up De Jong for a second goal a few minutes later, but the Dutchman was unable to reach Munir's pass.

The side from Navarre began to make changes as they definitively looked to get back into the match. They moved to a more direct style of play and looked to cause problems for Sevilla FC in their half, but they were assured and defended well. Osasuna did have some long-range free kicks, but neither Bono nor the backline were troubled by them. A third goal nearly came in the 80th minute, as Aleix Vidal found Papu Gómez with an excellent cross-field ball, but Sergio Herrera stopped his powerful drive from distance. Two minutes before, in the 78th minute, Sevilla FC set a new record, as they reached 517 minutes without conceding in LaLiga, beating the record set in the 2014/15 season.

With no more incidents, Julen Lopetegui's men sealed another win, their sixth in a row in LaLiga, which sends them into third place in the table, with 48 points, which consolidates their place in the top four. On Saturday, Sevilla FC will welcome FC Barcelona in the first of two matches between the two sides in the space of five days. The first match is in LaLiga, while the match at the Camp Nou is a Copa del Rey Semi Final second leg fixture.