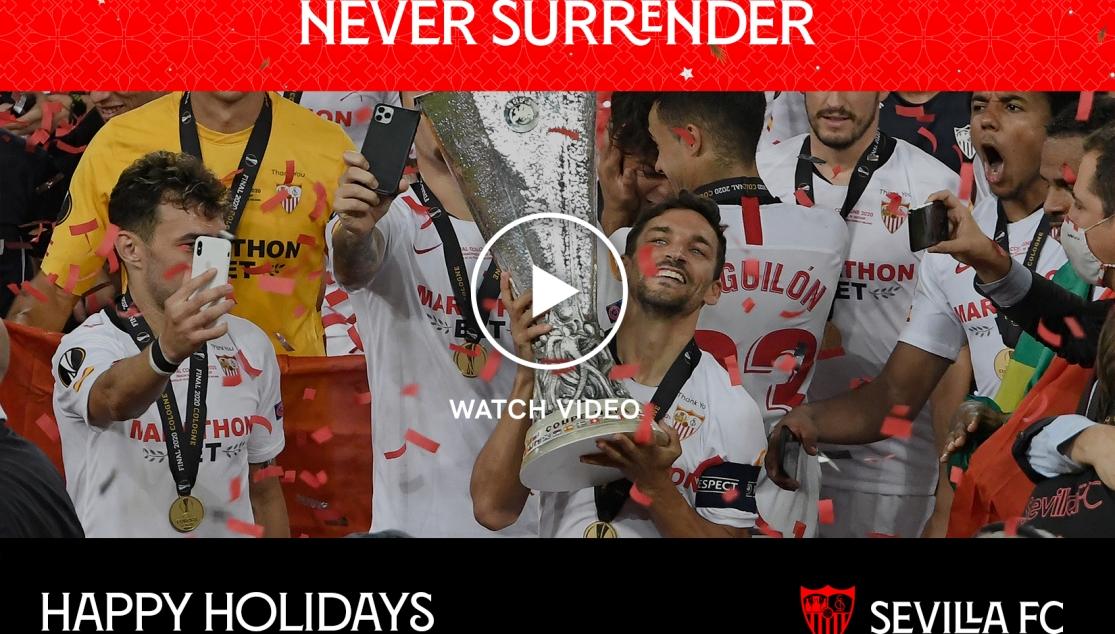 The club wanted to focus on great sportsmen and women who, like Sevilla FC, have done their best without ever giving up in the face of the adversities of 2020.

Sevilla FC wanted to send out a message of optimism and resilience for its Christmas campaign, in a year that is more than fitting for this due to the tremendous difficulties that the Covid-19 pandemic has generated in our society since the beginning of 2020. Under the motto Never surrender, Sevilla FC wants to convey that it is always possible, even when it seems impossible, if you really want something, because where there's a will there's a way.

Sevilla FC has recently relaunched its brand and this campaign aims to strengthen the positioning of Never Surrender, a message that is undoubtedly part of the club's DNA, as well as its way of understanding and facing life. Sevilla FC, being an example for many, has always been characterised by its fighting spirit and ability to overcome, even in the worst circumstances, as it has, in fact, demonstrated during 2020. Despite the complications caused by the pandemic, with a three-month hiatus, the team from Nervión managed to qualify for the Champions League and lift their sixth UEFA Europa League, leaving many more economically powerful teams in their wake, such as Roma, Manchester United and Inter Milan. And they did it by coming from behind in the semi-final and the final, never giving up, fighting to the end.

That is why Sevilla FC, who began the 21st century in the Second Division and today is the king of the UEFA Europa League and the Spanish team with the third-most qualifications for Europe, wants to remember 2020 positively with a spot campaign that shows that, despite the adversities that may arise, with class, effort and courage, great objectives can be achieved. The key, never believing the match is lost.  And to do so, what better way than by following the example of great sportsmen and women who, like Sevilla FC, have shown in 2020 that never giving up is the secret to achieving glory.

Specifically, the spot campaign features seven examples of Never Surrender as a key to success:

RAFA NADAL triumphs at Roland Garros, beating all his rivals without dropping a single set. His demands of himself have led him to win this tournament 13 times in 15 years.

DESIRÉ VILA overcomes the amputation of her leg and now competes at the highest level. The bravery of a gymnast turned Paralympic athlete.

THE SPANISH HANDBALL TEAM, after the disappointment of missing out on the Rio Olympics, won the European Championship. The Spaniards showed so much pride to win the European Gold.

CAROLINA MARÍN is international champion again after recovering from her serious injury. Her resilience puts her back on top of the podium.

JOAN MIR, by transforming his inexperience into consistency, surprising world champion of the MotoGP. The cheeky driver makes a great comeback with a dream finish.

SACHIN TENDULKAR, a cricket legend, wins the Laureus Sporting Moment (2000-2020) for being carried on the shoulders of his teammates after India won the World Cup, as a thank you from a proud nation. He embodies the passion of an entire country.

SEVILLA FC makes the impossible possible by winning its sixth Europa League. The club once again demonstrates its limitless ambition by winning all six finals it has played.

In a year that is difficult to forget, these values take on the greatest meaning, making it possible to develop a campaign with a message that is a faithful reflection of reality and of those who overcome it every day. All these cases, including Sevilla FC's, have filled millions of people with joy and pride, surpassing themselves at every moment and making the impossible come true.