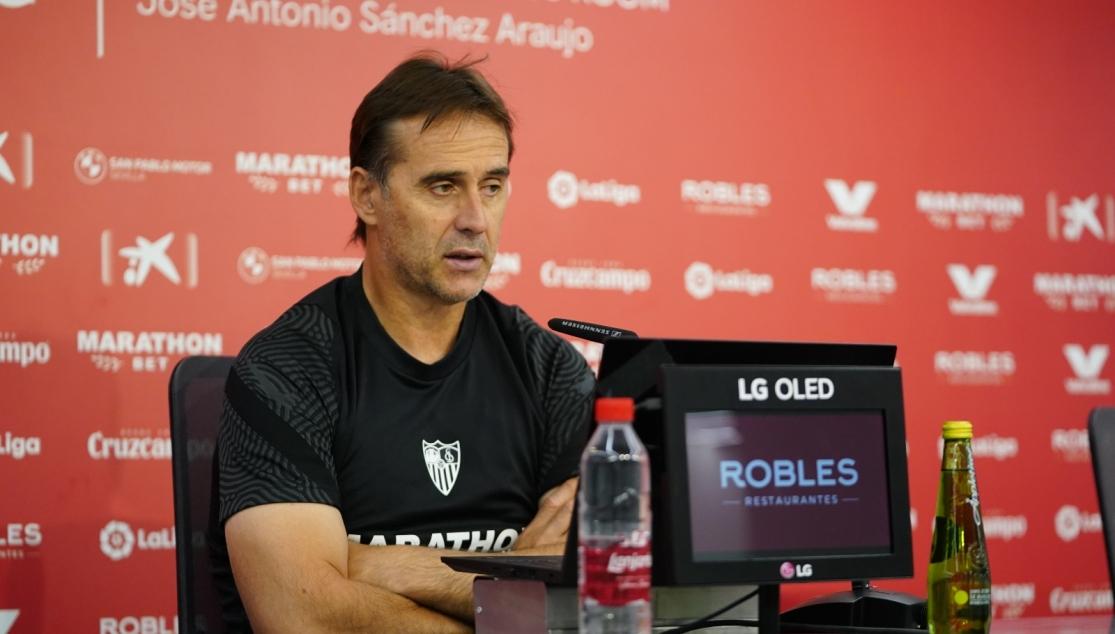 LOPETEGUI: "LEVANTE ARE ONE OF THE TEAMS IN LALIGA THAT PLAY THE BEST"

Julen Lopetegui was back at the press room at the Sánchez-Pizjuán on the eve of tomorrow's home match against Levante UD, a side that the manager praised in his pre-match press conference: "They are one of the teams that play the best, with almost the same players as last year and none of the important players have left. They have the same manager, the same style of play and another year of experience. They play very well and the match in Pamplona is an example. But also the match against Valencia, where they deserved everything apart from losing. They have many attacking options, so they will oblige us to play very well tomorrow".

The manager stated that En-Nesyri is feeling good both physically and mentally, and that there are two injury worries: "En-Nesyri is good, he's working like the rest of them. I don't stop there because these are normal football situations and the good times will always catch you working. He works a lot, so it will come. Carlos had an injury before the Cádiz match and couldn't train with us, we'll see how he is tomorrow. Bryan has also had a problem and we're awaiting the recovery of both. We'll see tomorrow, but the rest of them have no problems".

Lopetegui did not rule out another signing during the transfer window: "There's still some days, and the last few are always complex. We're focused on the match against Levante, that's what's under our control. The rest is down to someone who does it very well, that's Monchi". Also, he did not wish to speak about squad rotation tomorrow: "There is not a starting team, but a squad available to the manager. We will continue to pick the eleven based on the opponent and the timing. There are details that make us take decisions and see which is the best side for each match".

The Basque manager was obviously happy with the new situation regarding Koundé's possible departure: "The aim ahead of such a demanding season was to be capable of having the squad from last season or improving on it. I hope it's like that. Jules is our player, he's been ours at every moment and we are delighted that he will continue to be our player because he has to keep growing and improving. He's in the ideal place to do that".

Lopetegui offered his thoughts on the competitiveness of LaLiga, and emphasised the need to focus only on the present: "This is not new. There is absolute evenness in Spain and every match is a conquest. We only have to focus on the next match, and tomorrow it's time to face Levante. Doing it is very difficult and even more so if you don't. We must give full importance to the difficulty of each match".

He also did not comment on whether Joris Gnagnon will stay or look for a transfer: "Questions about assessments of the squad are internal. We'll see, we won't talk about events here but they bother me less than tomorrow's match. That's what we're focused on and we will manage the rest internally".

To finish, Lopetegui spoke about the exceptional situation that the squad is going through, but made it clear that all they can do is work hard: "We began preseason later on. It wasn't normal for everyone but especially for us, with barely eleven or twelve training sessions. It's what we've got and we have to make a permanent adaptation to everything. We have to make an effort to not depend on circumstances, but on solutions. From then on, with more matches we will be closer to being in shape, but we want to be focused and not look for many excuses".