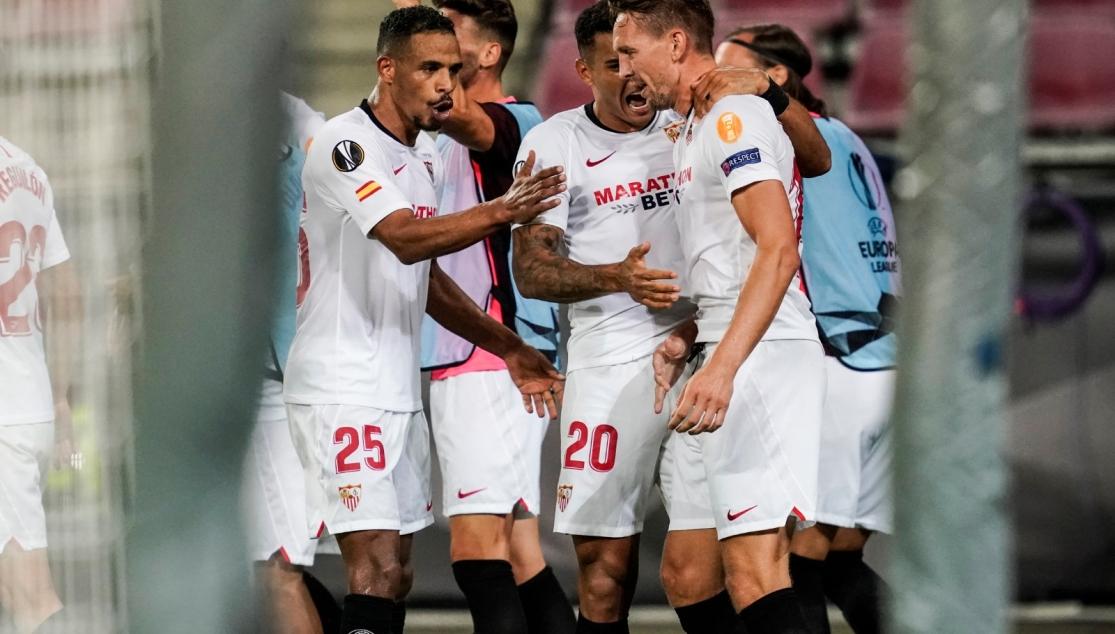 2-1: IF IT LOOKS IMPOSSIBLE, LET SEVILLA FC TAKE CARE OF IT

With everything going against them, suffering like never before and pinned back at times, Sevilla proved once again that the Europa League is their competition and they reached the final in an absolutely incredible way

If Sevilla and the Europa League are together, anything can happen. United knew it and ended up suffering late on in one of the great matches in Sevilla's illustrious 130 year history. Although things looked to be turning sour with a debatable penalty awarded for a Diego Carlos challenge on Rashford, which was converted by Bruno Fernandes, the winning gene came back in its purest form. Suso equalised soon after and the Nervionenses had to dig deep as United threw everything at Bono's goal early in the second half, but the Moroccan goalkeeper held firm and Sevilla saw out the storm. With just 12 minutes to go, Luuk de Jong took advantage of some poor defending to score the winner. Again, they had to dig deep, but United were out of ideas. We are in another final!!!

Unlike in recent matches, Sevilla did not come out with the situation under control. United pressed high up almost immediately and tested the strength of the Nervionenses. They played in Sevilla's half and opened the scoring with their first chance. Rashford had a shot well saved by Bono but the official awarded a penalty for a challenge by Diego Carlos on Rashford. Bruno Fernandes took the spot kick and placed it into the top corner. An impossible shot to save.

Sevilla recovered from the early set back, although Fred had a huge chance to double the English side's lead. The first effort came from Ocampos, but his powerful drive was within the reach of De Gea, who sent it out for a corner. The Nervionenses had improved and took full advantage. A wonderful team move, beginning in their own half, released Reguilón down the left, who whipped in a fantastic ball for Suso at the far post, who fired low into the corner beyond De Gea to level the scores.

The match became crazy as the minutes went on and Sevilla had to endure huge pressure. Rashford had a chance that fizzed narrowly over, and Bruno Fernandes also went close as the English side took the encounter to Sevilla. However, for all that the side from Old Trafford pushed, Bono responded, and became a hero. United had absolutely superiority for ten minutes, and could not believe it was 1-1 at the end of all. Neither could Sevilla.

Lopetegui looked to stave off that United dominance by introducing Munir, De Jong and Franco Vázquez and again, the minutes passed by. United were not as strong, which was something to celebrate. As an extra 30 minutes appeared to be on the cards, the winner came in the 77th minute. A Navas cross from the right found the unmarked Luuk de Jong who gave De Gea no chance. Unbelievable. Sevilla led 2-1.

It was time to suffer again, but this time round Manchester United looked out of energy, and were unable to muster any real threat. Solskjaer's side tried to create chances on the byline but Sevilla FC were having none of it, defending with the ball until the 96th minute to secure an unbelievable result. Tomorrow, we will find out who we will face in Friday's final, Inter or Shakhtar. For now, it's the least of Sevilla's concerns.