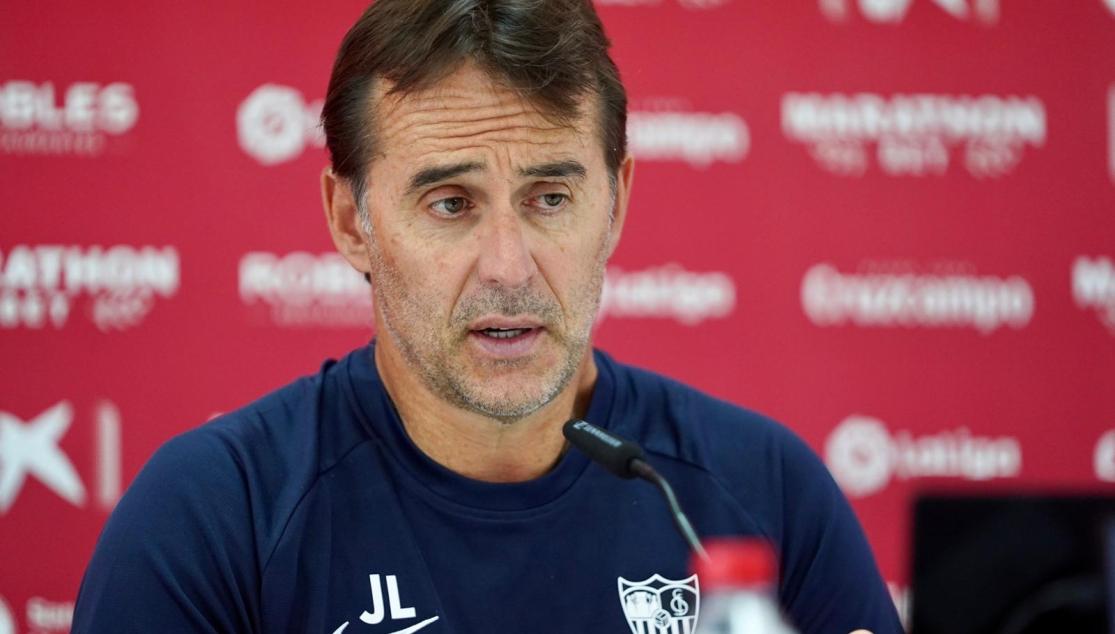 JULEN LOPETEGUI: "WE ARE HAPPY, BUT WE HAVE TO FOCUS ON THIRD PLACE"

Julen Lopetegui has given his pre-match press conference ahead of the final LaLiga away match of the 2019/20 season. It was a time to talk about Real Sociedad, but also the fact that Sevilla FC will be in the Champions League next season: "It means a great joy, a feeling of achieving to be where we all wanted to be and it is not easy. It's fair because we've been up there almost all year, we had to finish it off and the team, in a complex and different scenario, has managed to do so. We are happy with the attitude, mentality and determination of a fantastic group that has had its award. Sometimes it doesn't go together but this time it has. Having said that, we have to focus on finishing as well as possible, we're hoping for third place and tomorrow's game is a nice and demanding one".

Obviously, the team will try to finish as high as possible in the table: "It makes us hope. The team and the club are ambitious and we try to convey that. We want it, with the calmness of already securing a Champions League place. We have to continue in the same way. We want to be a team at every moment and this is the only path. Being a team in the broad sense of the word.

The manager offered no hints about team selection: "In these nine matches, there was some rotation. In every match we have changed up to six or seven players because the situation required it. We will try to put out the best team according to the circumstances and there are lots of variables. We're going with the aim of competing and the healthy ambition of taking three points. They are playing for so much and we're very excited against one of the best teams in the league, they're aggressive in attack and have many good things. They've had a bit of bad luck in the last few matches".

The Europa League is also on the horizon, but there are two matches to go: "I'd be lying if I told you that you don't look at it out of the corner of your eye, but the best way to prepare it is to compete well and have good matches. You can also get injured while training, and unless there is an obvious risk, we will give it a natural treatment and deal with tomorrow's demand as it comes. We want to get points and be able to get closer to that third place that we're really hoping for".

Vaclík will not feature at the Reale Arena, but he might return on Sunday: "Tomas won't be there tomorrow but we don't know about Sunday. We have to look at it day by day because he handles pain well and lives well with knocks. We have to be optimistic with him, but we're happy with Bono, he's ready, and he's helping us which he deserves. Let's hope he can continue helping us in these matches".

"We have to be optimistic with Vaclík, although he's not back tomorrow"

The manager feels loved here and is not shying away from the demands: "I've always felt that love, I can't tell you anything else since I got here. When I have been with Sevillistas they have shown me that, and that doesn't mean that during the season there can be moments. The fans are sovereign and can protest, it is a point of demand and I consider it positive. I have no complaints or doubts about the love of the fans.

He also spoke about the doubts that could have arisen a year ago: "In the end all this information and prejudices that can exist, can come from situations that one does not handle well. I have worked every day with the same ambition and professionalism, now with the joy of having achieved an important goal for the club and for us. I don't stop to ask if they know me better or not, I just want them to be happy. Sevilla does not stop and now we are going for these two matches and for the Europa League, which are very important challenges. We prefer to look at the challenges that lie ahead, than what we have already done".

"I have worked every day with the same ambition and professionalism"

Lopetegui is aware of the need to live with ups and downs: "Glory does not exist without suffering, for any aim in football. To achieve any ambitious aim in the most important league in the world, there are always tough moments. In those moments I felt the support of the club, never any different feeling. You get your marks at the end, but with the normality of knowing that to achieve things you have to have suffering and doubts. It's the only way".

The Basque manager is also at a club who are getting used to being with the elite: "It's not simple. There's been seven qualifications in the 21st century, some through winning the Europa and some through direct qualification. It has merit and follows a good structure, sports planning and important knowledge. Many times the planning is left up in the air because of the pressure, but it seems to me that it can be an important reason to achieve those successes".

Maybe it's too soon to talk about next season for the manager: "I speak with Monchi every day, more than my wife. Decisions will be made in due course, if anyone doesn't stop working, it's him, so we'll see. The demands are tough and will be more than with the Europa League. We have to prepare ourselves.

Finally, Lopetegui spoke about the need to rest before the Europa League in Germany: The lads will rest for five or six days after the final match, I think they're beneficial for the mind and their body without missing anything. Shortly we'll return to prepare for the Europa League".