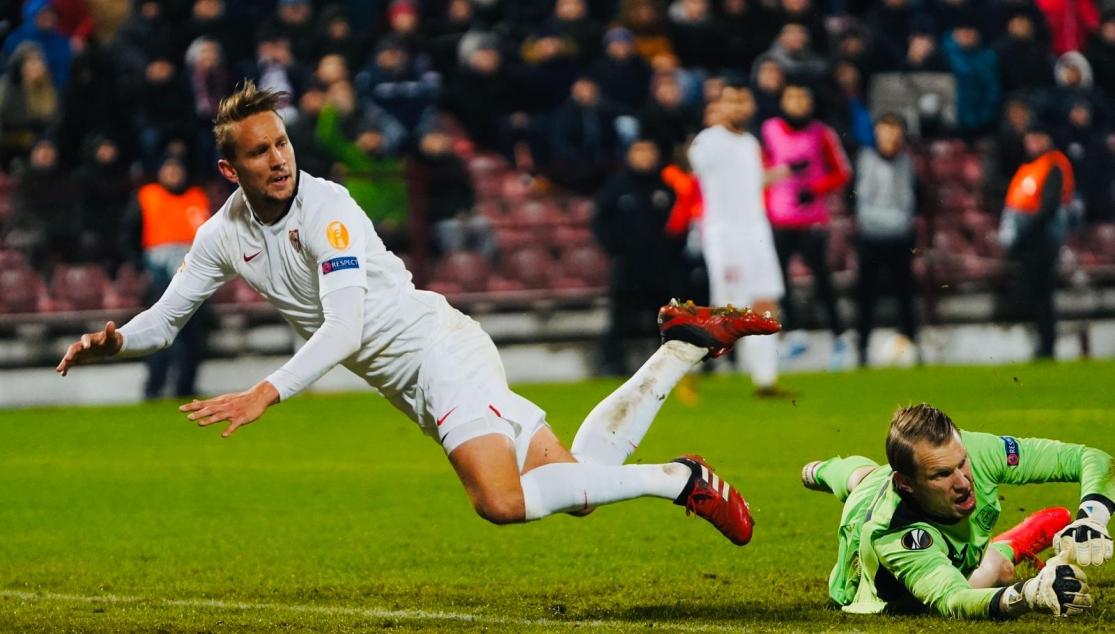 1-1: ALL TO PLAY FOR NEXT WEEK IN SEVILLE

Sevilla FC couldn't overcome the conditions in Cluj-Napoca to get the win, but they will return to Spain with a positive result after coming away with an away goal in a 1-1 draw. Deac opened the scoring for the home side in the second half from the penalty spot, and En-Nesyri hit back late on for the visitors after De Jong had set him on a plate.

It wasn't the most exciting first half, in a game where the pitch, without it being much of an obstacle, did impede the teams from moving the ball around the pitch freely. Lopetegui's men had the most of the possession, but they couldn't find a way through the home side's defence to open the scoring. However, they were the team that came closest to scoring after Suso's shot flicked off De Jong, and nearly ended up in the back of net as it just whistled over the top of the crossbar.

Dan Petrescu's men tried to score and looked most dangerous from dead ball situations and long shots - which didn't give Vaclík too much to worry about. Half-time came without much to shout about and with a Sevilla side who needed to turn it up a notch in the second half to assert their dominance in the tie.

However, it was the home side who came out of the traps better after the break. And, as their play deserved, they were awarded a penalty after VAR was consulted on an unfortunate handball on Koundé from a cross. With the addition of VAR into the knockout stages of the Europa League, Aytekin stopped play and reviewed the action, to which he awarded the penalty. Deac made no mistake from 12 yards out to send the home fans wild.

It looked like it wasn't going to be Sevilla FC's night once again as Joan Jordán's goal was ruled out for an offside in the build up. However, fortunately the much needed goal did arrive in the last ten minutes of the game. After a Sevilla corner was cleared, it fell to Rony Lopes who's blocked shot found it's way to De Jong. He and En-Nesyri found themselves in a 2-on-1 situation with the goalkeeper, with the former squaring it to the latter to give Sevilla the equaliser.

Cluj didn't take too many risks in the closing stages as it was the away side with all the ball. Rony Lopes had a good effort saved in the dying minutes by Arlauskis, something which would have given the away side a huge advantage in the tie. That's how things ended in Romania, which leaves it all to play for in a week's time. Now, it's time to place the focus back on La Liga as the Sevillistas have an in-form Getafe to contend with on Sunday at the Coliseum.

REFEREE: Deniz Aytekin, from the German Federation. Yellow cards for Fernando and Reguilón.