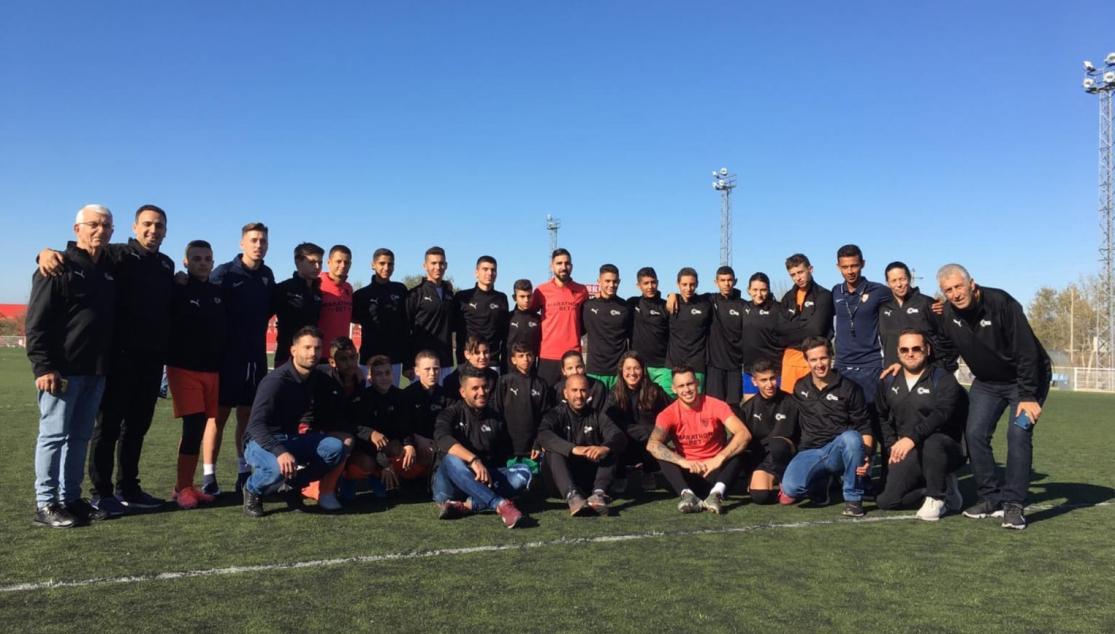 Dabbur, Chicharito and Ocampos welcomed the young Israeli footballers, who travelled to Spain for this experience given to them by Sevilla FC

Some twenty odd young Israeli footballers from five Israeli clubs made their way to Seville last week to enjoy an unforgettable experience with Sevilla FC. 'Shield of Honor' is an initiative promoted by the President of Israel, Reuben Rivlin, in collaboration with the Department for Culture and Sports, the Israeli National Football Association, the Profession Football Israel League (IPFL), and the sponsors: TOTO and Value Sport. It rewards local football clubs for promoting positive values within sport. The project forms part of the the 'Israeli Hope' initiative, which wishes to create an alliance between the local community and invite football clubs to fight to promote these positive aspects in sport, and fight against violence and racism. Reuben Rivlin, the President of Israel, said the following during the awards ceremony of the initiative: "Football is a game and a competition; but it's also something that brings together different worlds and cultures".

In this fifth edition of the project, Sevilla FC and La Liga have work together, and organised a trip to Seville for twenty young footballers from the clubs who made it to the final of the awards. 'Shield of Honor' uses values learnt in football as an educational tool to learn about respect and coexistence; and, the Israeli delegation were able to count on representatives from different cultures and religions that coexist in Israel. The young Israelis were able to see up close what a big club like Sevilla FC is, train in their training ground, meet first-team players and enjoy the experience and excitement of going to a match at the Ramón Sánchez-Pizjuán.

Castro: "We're a club that is socially involved and committed. We can't be passive when it comes to these topics"

"For La Liga and Sevilla FC, it's an honour to participate in this project as it directly connects the values as much from La Liga as from their clubs that we're trying to promote. We work so that respect, fair play and companionship reign in both professional and grassroots football", Óscar Mayo (Director of Marketing and International Development, and part of the La Liga President's Cabinet) said. Furthermore, President of Sevilla FC, José Castro said that: "Sevilla FC always wants to give back what it gets from society, and actions like this one only reinforce our intentions. We're a club that is socially involved and committed. When it comes to the topic of helping young people, we can't be passive. We know that these boys aren't just good footballers, but also great people. We're delighted to be able to have them in Seville".

Eran Eytan, Director of the Project from the President's office of the 'Israel Shield of Honor', said: "The colaboration between 'Israeli Hope' and La Liga and Sevilla FC, allows us to reward youth football clubs in Israel, that are selected for the educational activities they carry out by promoting equal opportunities and tolerance in the Israeli society. Thanks to Sevilla FC's hospitality and their unique experience, we can show to our kids and coaches the great influence of football".