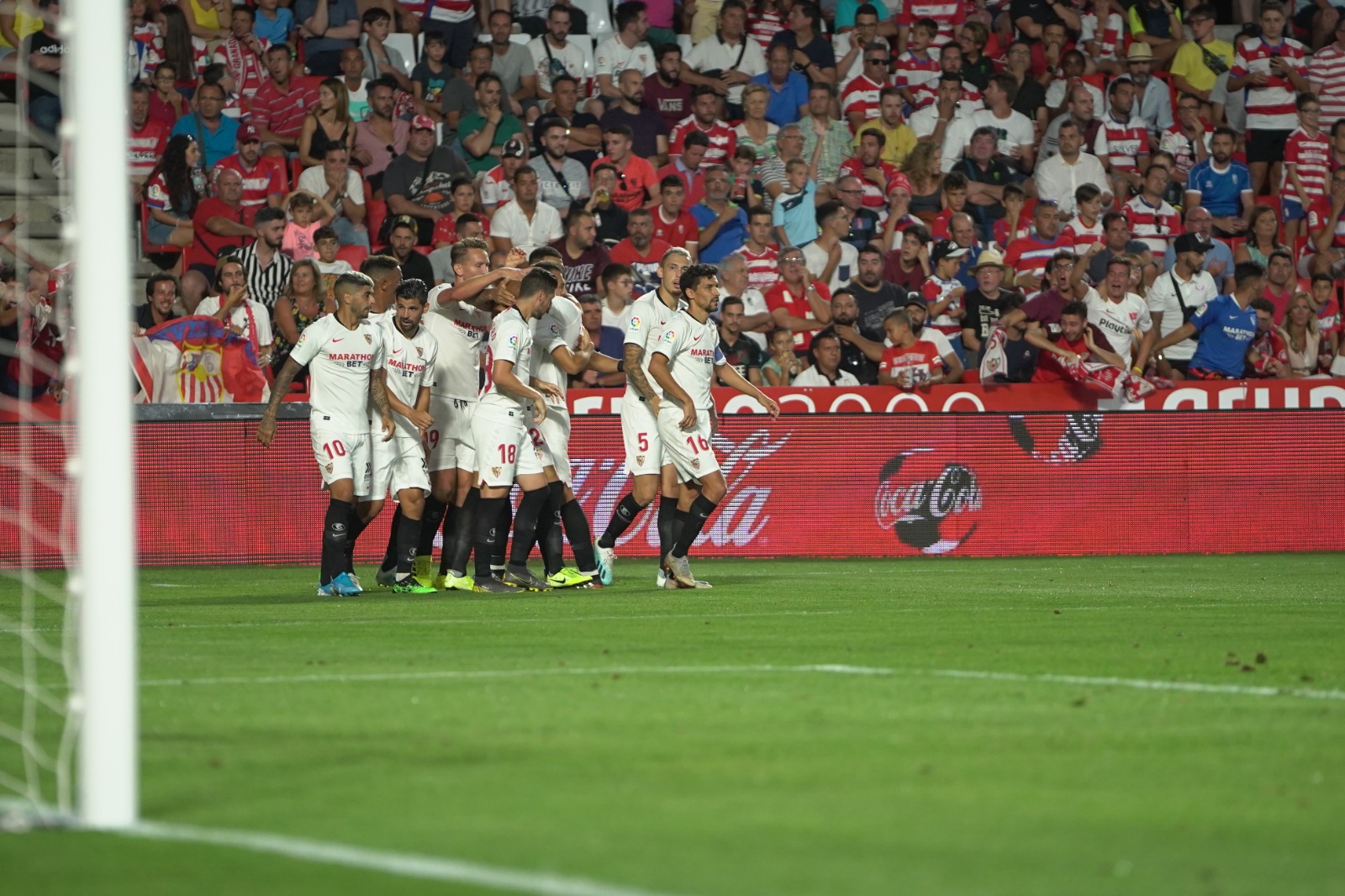 0-1: SEVILLA HAD TO DIG DEEP TO TAKE ALL THREE POINTS FROM NUEVO LOS CÁRMENES

Entradilla
Joan Jordán scored the only goal just after half time, before Sevilla had to fend off an onslaught from Granada
Cuerpo Superior

Two wins from two and six points already for Sevilla FC, after an away win against Granada CF on Friday night. After controlling much of the first half, Joan Jordán's goal just after half time changed the match completely, with Sevilla having to dig deep and put up with a lot of pressure from Granada to take home all three points.

Julen Lopetegui made just one change from last week's starting XI against Espanyol. Banega returned to the squad after his ban from the end of last season, and replaced Óliver Torres in the starting line-up. Despite the change, the side went out with the same clear ideas that was on display five days ago at the RCDE Stadium.

These clear ideas were evident today, strength at the back, fluid play in the middle and playing high up on the wings, and both wingers Ocampos and Nolito opened up the home side's rearguard on more than one occasion. The first chance for the Nervionenses came from a move down the right, De Jong's effort going narrowly wide.

Escudero, who came on for Reguilón, had the best opportunity before half time

On the other wing, Nolito twice tried to beat Rui Silva from distance with low shots, but both were saved. His partner on the left, Reguilón, had to go off injured in the first half, after a clash of heads with Víctor Díaz. Escudero took his place, and ended up having the best chance of the half just before half time: his shot from the edge of the box was pushed away by Rui Silva, however, as both Carriço and De Jong tried to score the rebound, they got in each other's way.

But the first half was not plain sailing for Sevilla, who also had to defend deep to stop attacks from Diego Martínez's men, who took control of the game for fifteen minutes. Both Soldado and Quini tested Vaclík, who barely had a more difficult task all match, especially when he was helped by a timely block by Fernando, stopping a shot from Antonio Puertas.

The second half started much like the first, with a strike by Escudero which forced Rui Silva into another good save. However, the keeper couldn't do the same a few minutes later. After De Jong had entered the box and saw his effort blocked, Joan Jordán followed it up and made no mistake in putting Sevilla ahead. They then imposed themselves onto the opposition afterwards, where Lopetegui's men continued controlling the ball and transitioning at pace.

However, Granada had to take a few chances and their manager, Diego Martínez, brought on Machís and Carlos Fernández. It didn't take long for Lopetegui to respond to these changes, bringing on Gudelj for Banega, forming a two-man defensive midfield alongside Fernando. For the rest of the match there were periods when Sevilla had to dig deep. Granada had a couple of opportunities, two of these falling to Machís who could have drawn the home side level, but his shots went over the bar from the edge of the box.

A tiring Sevilla once more managed to get control of the ball, but without their usual speed in transitions, leaving De Jong isolated up top all too often. Lopetegui looked for fresh legs in the form of Franco Vázquez who, with neither Banega nor Jordán on the field, took control of the team. It was the Argentine who had the chance to secure the win, but unfortunately he took too long to get his shot off at goal.

Sevilla finished their second game of the league season by taking home all three points. In a week's time, they will play their next game back at the Ramón Sánchez-Pizjuán, where they will host Celta Vigo.