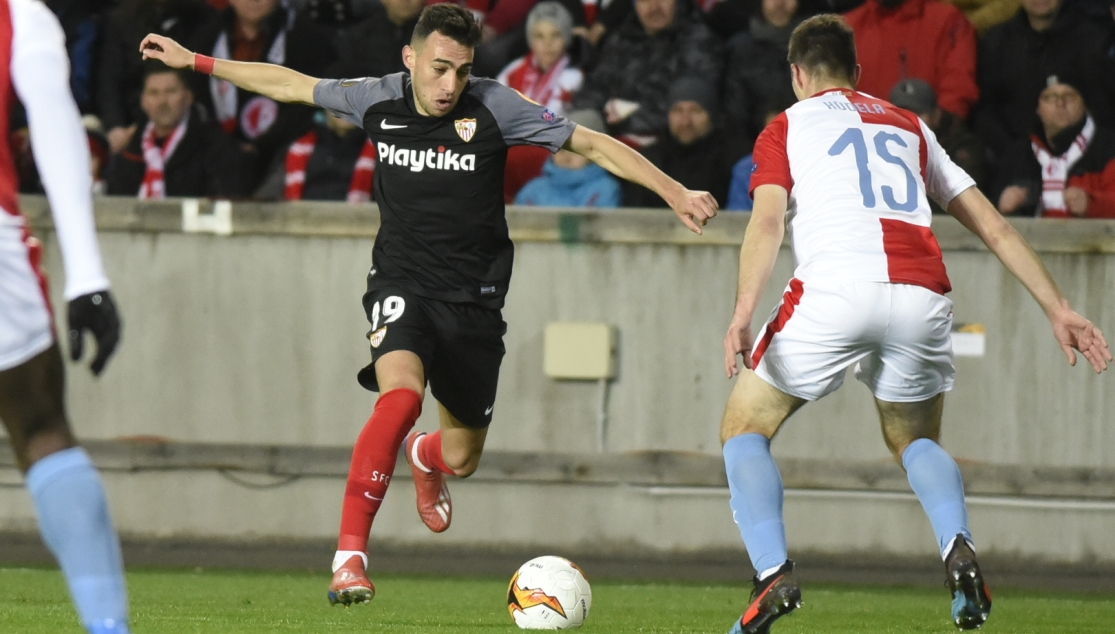 4-3: SEVILLA KNOCKED OUT OF THE EUROPA LEAGUE AT THE LAST MINUTE

Sevilla FC went behind on two occasions before putting themselves in the lead in extra-time. The Czechs, after equalising, scored in the last minute to knock Sevilla out of the competition

Sevilla FC will not be in the UEFA Europa League quarter-final after falling four goals to three at the Eden Arena against Slavia Prague. The game had many twists and turns - the Nervionenses managed to level the tie up on two occasions and went ahead in extra time before Traoré decided the tie in the Czech's favour in the last minute.

As expected, the Czechs imposed a very physical game which made life difficult for Sevilla's playmakers and the centre-backs with the long balls. Quincy Promes created problems down the left wing with his dribbling and hit a right-footed shot which the Czech goalkeeper had to send for a corner. And it was from a corner that Ngadeu-Ngadjui's goal would come, turning the ball into the net after Skoda's assist at the back post.

Promes, Sevilla's most promising player, won a penalty before the break that Ben Yedder converted to make it 1-1

It was a tough blow but Sevilla got back up again. Promes, Sevilla's most promising player, had a good chance to get Sevilla back on level terms after a good dribble and sending a fierce shot against Kolar's crossbar. With Sevilla struggling to find the opening and Slavia assured in their defensive work, the spark of optimism that the team needed would arrive. Promes, threatening once again, was brought down by Kolar as he tried to prevent the Dutch winger getting a shot in. Ben Yedder, ever confident, converted from the spot to turn the game around.

However, the joy that the team had at the break would soon turn into despair. Jesus Navas was adjudged to have fouled Boril in the box and Soucek would put the Czechs back in front by converting the penalty. The goal did not change anything as Sevilla still needed a goal to not go out. And what a goal it was. After a few clearances from a corner, the ball dropped perfectly onto Munir's foot, rifling it into the back of the net to send the match to extra-time. The match calmed down although Sevilla did keep try and push for the goal that would get them the win. With practically no chances, the match went to extra time, although Ben Yedder did have one headed effort that Kolar did well to save.

With the extension coming to an end, Traoré chased a ball in the area that Kjaer failed to clear and that meant the 4-3

Sevilla gave it their all during the thirty minutes of extra-time but it was taken away from them in the cruellest fashion. Franco Vázquez put away a great header following a cross from Promes, giving Sevilla the lead and added advantage of having scored more away goals. But the Czech's equaliser would come just five minutes later, their hopes renewed once more after some poor Sevilla defending. With full-time looming, Slavia launching balls and Sevilla clearing them, the moment would come that would finally knock Sevilla out of the Europa League. After a free-kick and many failed clearances, Traoré made Slavia's dream come true after making it 4-3.