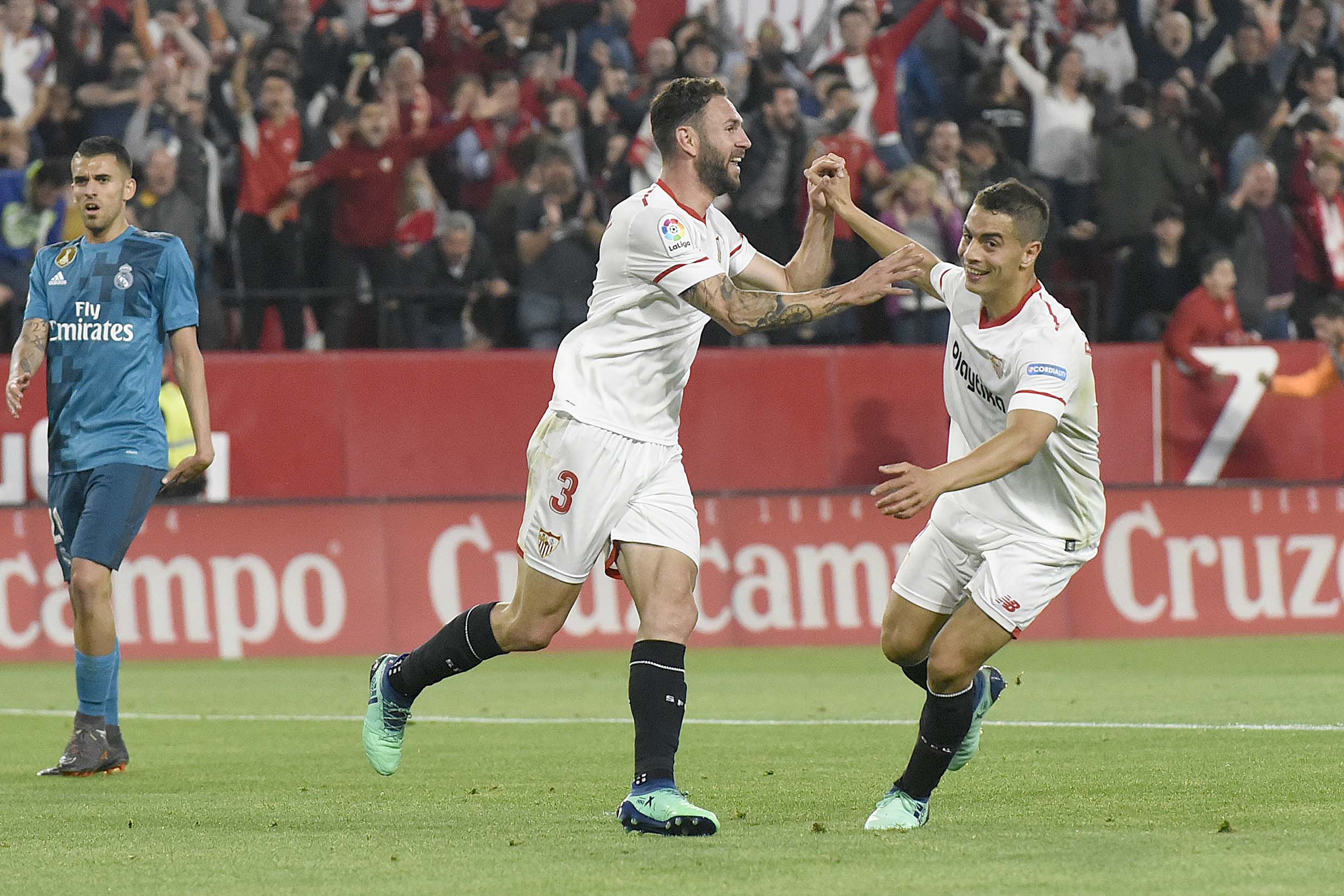 3-2: SEVILLA FIGHT TO TRIUMPH IN A CLASSIC

Entradilla
A huge win for Sevilla FC this Wednesday night. Triumphing in a back-and-forth battle, goals from Ben Yedder, Layún and Mercado led the Nervioneses to a 3-2 victory that will not be quickly forgotten by the Nervión faithful
Cuerpo Superior

Six points in six have proven that this team is still willing, ready and able to give everything for European football next season. Without paying attention to the ins and outs of the opponents - who would eventually start with their strongest available team - Sevilla managed to triumph in an absolute classic and pick up three invaluable points in the race for Europa League football. First-half goals from Ben Yedder and Layún would give Sevilla their base - one which would be built on by a combination of Mercado and a fortunate deflection to make it three - and consolations from Mayoral and Ramos would not be enough for Madrid. A fine performance and momentum to take into El Gran Derbi.

The match started with all the intensity that was expected, though Caparrós could not be as daring with his starting eleven as he had been in his first game against Real Sociedad. The Nervionenses took no early risks, staying safe at the back and fighting for every ball in the centre of the field as if it were the last. An inside ball from Escudero for Vázquez was the first warning shot Sevilla would fire, though Ramos would be there to block the ball before the Argentine could trouble Casilla. Casemiro would respond with a tricky effort for Soria to get hold of but the keeper would deny the midfielder well. As the early exchanges passed, Sevilla started to find their escape routes and find the feet of a Wissam Ben Yedder. Holding the ball up expertly, the Frenchman would carve a wonderful chance for Miguel Layún just after the twenty-minute mark but the Mexican wouldn't find the connection needed to find the target.

As the early exchanges passed, Sevilla started to find their escape routes and find the feet of a Wissam Ben Yedder

Not five minutes later, Ben Yedder would be at the centre of attention once again, this time providing the side with a clinical finish to break the deadlock. A long ball forward from a returning Nico Pareja would find the head of Luis Muriel, who starting on the wing, flicked the ball on perfectly to the Frenchman. Under heavy pressure from Ramos, he would make no mistake when sliding the ball under Casilla. With the Sánchez-Pizjuán rocking, Sevilla now found comfort in their play - conceding few chances and creating well. With the hosts taking far more control of the ball, things even started to look uneven and Sevilla had their tails up. Vázquez would nearly scramble the ball in to make Sevilla's dominance pay, but would see his chance cleared off the line by Nacho. Fortunately, Sevilla wouldn't have to wait long before finding a second.

Three minutes later, a beautiful bit of counterattacking football would leave the hosts taking advantage of the stretched spaces in Madrid's back line. Ben Yedder found his compatriot Nzonzi, who bundling through defenders would selflessly set up Miguel Layún for an easy finish to make it two. Sevilla had breathing room - a two goal advantage at the break. However, things were never going to be easy and come the restart, Sevilla would have to hold their nerve to calm an improved Real. Zidane's men would come out far more comfortable on the ball, though a Sevilla defence of Mercado, Pareja, Lenglet and Escudero would hold strong. As dangerous as they had been on the break in the first-half, Sevilla even had a big chance through Ben Yedder to make it three. Casilla would be there with a last-stitch save to deny the striker. Inevitably looking to bounce back, Madrid would have a golden chance to pull one back just before an hour had passed. Given a penalty, Ramos would pass up the opportunity when firing against David Soria's bar from the spot.

Ramos would fire a first of two penalties against the crossbar

With a rocking Sánchez-Pizjuán and frantic, end-to-end action, Sevilla would again go close to a third: this time, Muriel denied when one on one with Casilla. Caparrós would look to the bench, bringing on Sandro for the Colombian striker to give the side a powerful and speedy outlet. Roque Mesa would be the next to come off the bench, replacing Vázquez to give Sevilla calm and legs in the centre of the park. His changes would work a treat and five minutes from time, Mercado would be there to provoke a deflected Sergio Ramos own goal from the right-hand side. Real Madrid would find their consolations, first through Mayoral, then through Ramos - this time converting from the penalty spot after Theo won a spot-kick off Mercado - but Sevilla would already be out of sight with a three-goal cushion. Three giant points.

With Sevilla now sitting in seventh place, just two games separate the Nervionenses from European football next season. The first comes up sooner rather than later, with Sevilla competing against local rivals Betis in a huge Gran Derbi on Saturday. The same fight as was seen tonight is exactly what the doctor ordered.