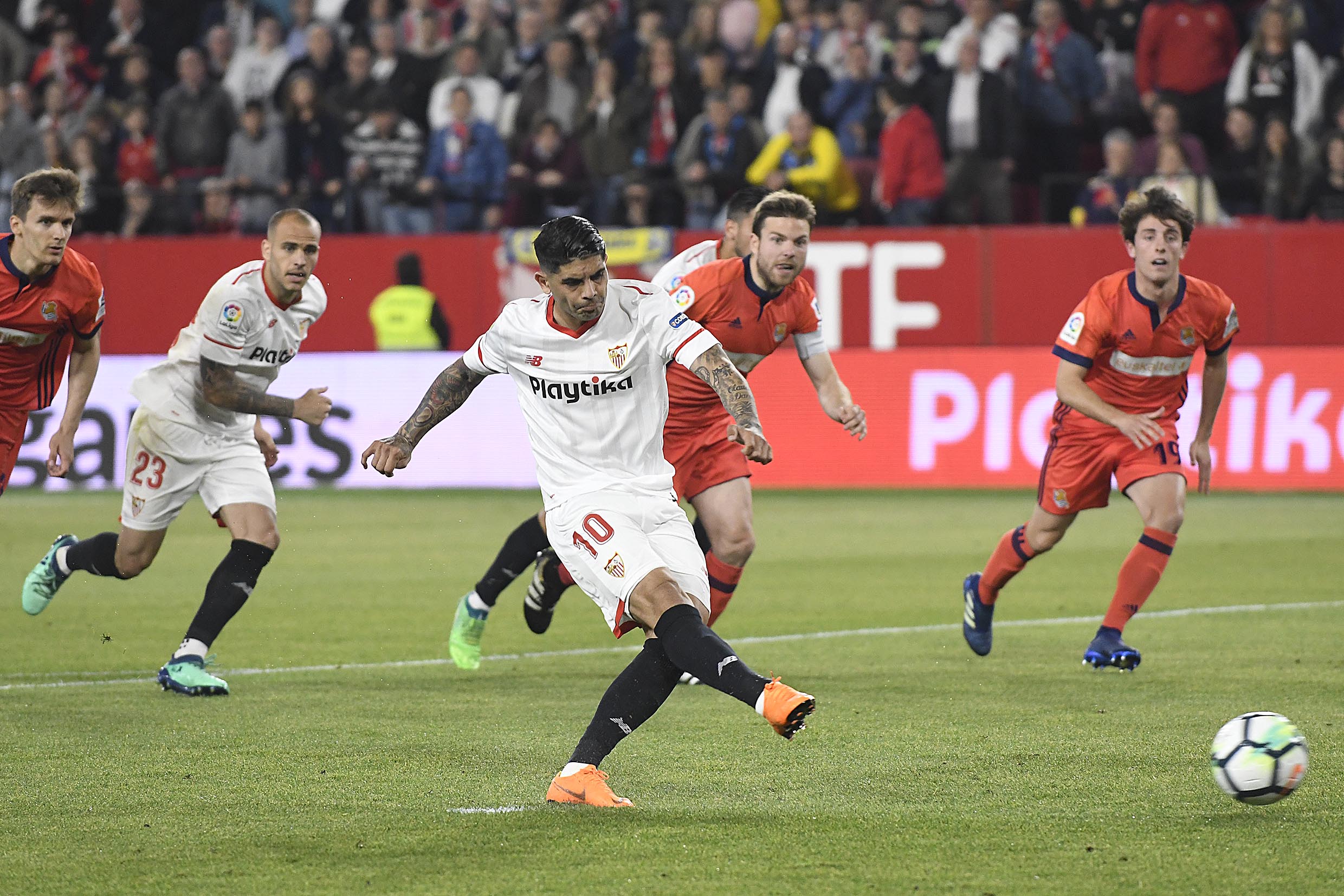 Entradilla
Without time for a tactical overhaul, Joaquín Caparrós led Sevilla to a long overdue three points in La Liga through sheer passion and fire. An Ever Banega penalty at the start of the second-half would see the Nervionenses through to a slender 1-0 win that puts them back in the European spots
Cuerpo Superior

Three points, finally! Sevilla FC got the job done tonight under the watch of Joaquín Caparrós and took three vital points against a Real Sociedad side that never seemed out of the game entirely. In a tight match, an Éver Banega penalty not two minutes into the second-half would be enough to see the Nervionenses through. Though the hosts would be made to suffer as they clung to the one goal advantage, three points force Getafe to beat Las Palmas this Sunday to knock Sevilla out of the European spots.

Sevilla came out clearly fired up, wanting to show the fight and passion that Caparrós seemed to bring out the very second he set foot in the Ramón Sánchez-Pizjuán. In the very first minutes, real drive could be seen from the Nervionenses, with the hosts very active on the wings and pressing Sociedad in the centre of the park. Seven minutes in, Sevilla would already be rewarded with their first chance - Sarabia striking from 20 yards and only seeing his effort fly over by a few inches. Not long after, the winger would be at it again, this time attempting a lob over Moyá when one on one with the Sociedad keeper, though unfortunately unable to find the height for a picture-perfect finish. A fine start in Nervión, though as the initial frenzy passed, the game calmed without any breakthrough. Sevilla would need to conserve their energy for the 70 minutes that remained and as they did so, Sociedad grew into the game.

Looking to rob the ball off Sevilla and break with speed, Alguacil's men fired warning shots on quarter of an hour through a Januzaj header that flew over and then not much later through Oyarzabal - the forward fortunately firing right at David Soria and failing to make the most of his chance. The intensity had subsided, meaning the Nervión faithful would need to step up to cheer the side to the same fire that had been seen in the opening minutes. With Sevilla responding, the only thing lacking was a deserved goal. With Sarabia heading wide and Sandro denied from point-blank range, the Nervionenses ended the half with the same threat they had posed at the beginning of the match. The breakthrough would have to wait but only one side was looking likely.

After the restart, the hosts would not have to wait long before that breakthrough came. Under a minute into the game, Sandro would be slipped through in the Sociedad box and bundled to the floor when threatening to break away from the back-line. A Sevilla penalty and a golden chance to find a deserved opener. Éver Banega stepped up... Cool as you like from 12 yards. One goal up, Sevilla showed no sign of letting up. Breaking with speed after Sociedad had threatened going forward, Sandro would go close yet again, cutting back beautifully on his right foot and seeing a fine curling strike denied by the fingertips of Moyá. Sevilla had their tails up, feeding off the energy of a Joaquín Caparrós who to all the world looked like stripping off his tie and running onto the field himself.

Cool as ever from the spot, Ever Banega would put Sevilla ahead not two minutes into the second-half

The boss would look to the bench, bringing on Correa for a tired Nolito and bringing Geis on for Roque Mesa. Though Real Sociedad would not have many clear-cut chances to trouble David Soria, the hosts would need to double down to keep a clean sheet and avoid problems. Sevilla, though they would never give up on going forward - Sandro with another chance and Sarabia with a rocket of an effort tipped just over by Moyá. A third Sevilla substitution (Vázquez for Sarabia) would be needed to break the tension of a final few minutes which saw Sevilla hanging on. Sociedad, fortunately, would not be able to find an equaliser and Sevilla had their first win since victory in Old Trafford.

With three long overdue points, Caparrós' side now sits in the European spots - at least until Getafe face UD Las Palmas. With the rest of the league on hold until next weekend when matchday 36 ends, Sevilla will have to turn their attentions quickly to Real Madrid, who visit the Sánchez-Pizjuán on Wednesday in a match rearranged for the Copa del Rey final. The first of three matches now remaining, with Sevilla now looking to depend entirely on themselves to secure European football for next season.