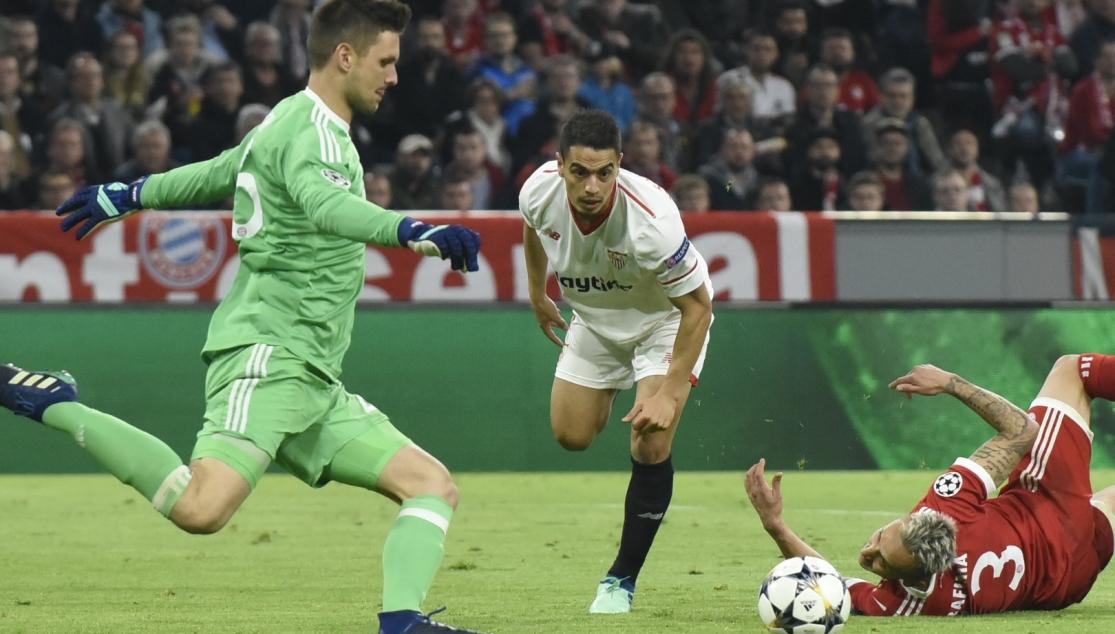 0-0: THE DREAM ENDS WITH A VALIANT DRAW

Sevilla FC couldn't overturn the 1-2 loss suffered in the Ramón Sánchez-Pizjuán against a Bayern Munich side who pass on to the semi-finals of the Champions League. Despite spirited play in both halves and a commendable defensive performance, the Nervioneses just couldn't find the goals needed to keep the Champions League dream alive

Showing tonight that this Club truly never surrenders, Sevilla FC bowed out of the Champions League with spirit and fight in the Allianz Arena. This Wednesday Sevilla Fútbol Club said goodbye to the Champions League for the 17/18 season with heads held high. Fighting for a 0-0 draw in a cauldron of an arena, an outstanding defensive performance could not be matched going forward and the Nervionenses could not find the two goals they needed to overturn a 1-2 first-leg loss in the Sánchez-Pizjuán. Rattling the bar in the second-half would be the closest Sevilla would come but a professional job from a fine Bayern Munich side would be enough to see the newly crowned Bundesliga champions through. Attentions now turn to securing European football through La Liga and the Copa del Rey Final in ten days time.

In the build up to tonight's match, a lot was said of Bayern's first few minutes. And a chance at a one on one through Lewandowski showed that the hosts knew exactly how important the start of the game was - an early yellow card for Mercado may have put Sevillista nerves on edge but the visitors would slowly and surely grow into the game. Bayern would try their luck from range on more than one occasion but a back-line of Navas, Lenglet, Mercado and Escudero would remain solid, Soria behind them showing his worth once again. Going forward, Correa would come closest after a teasing cross from Navas but unluckily the ball just wouldn't fall for the Argentine. With a penalty appeal turned down, Sevilla's pressing showed the visitors had far from given up on the tie.

As expected, Bayern came out with a flurry but Sevilla showed they had fight left in them

As the energy of the opening quarter of an hour died down, Bayern started to take control of the game, though without the bite their pedigree threatened. With the Bavarians pressing, on more than one occasion Navas was forced into defensive heroics - namely to deny Ribéry a tap in at the far post - and David Soria was forced into stunning saves to keep the scores level. But Sevilla hadn't been without their chances too. Sarabia fired over when finding space in Bayern's penalty box and Escudero was there with a sliding effort that rolled just wide of Ulreich's post. Unfortunately nothing was doing for the Nervión side. A tight first 45 minutes, Sevilla were still very much in the tie.

The start of the second-half did not see a huge change in the game's script. With Bayern clearly not taking too many chances, Sevilla showed an eagerness to be direct. Banega looked for the feet of Vázquez and Ben Yedder often, and Correa and Sarabia ran directly at Bayern's full-backs when they could. Behind, Navas was doing a fine job of marking Ribéry, who was even forced off not long after the restart. With minutes ticking by, Montella looked to the bench for impact, subbing off Ben Yedder for Muriel and Sarabia for Sandro. However, the biggest chance Sevilla would see would come through Correa. Having won a dangerous free-kick on the left-hand side, Banega would send a perfect ball across the box. Glancing a header towards Ulreich's net, the ball would strike the frame of the goal and bounce clear. Agonising for Sevilla.

There was still time left but with Bayern making smart defensive changes to shut up shop, things only became harder for a Sevilla side pressing and pressing for chances. Robben remained as threatening as ever but Wagner and Thiago were brought on in an effort to calm the Sevillista wave. With Sandro showing flair and fight to create half-chances going forward, the Nervionenses were straining with every sinew to do justice to the 3,000 rowdy travelling fans who spent 90 minutes singing for their team. The ball would just not fall for Sevilla and the goal would never come.

With nothing left to give, only a red card for Joaquín Correa would mar a fine Sevilla showing in the Allianz Arena. Now with just 10 days until the final of the Copa del Rey and a Europa Leauge six-pointer with Villarreal even closer on the horizon, Sevilla will need to regain focus as quickly as possible. The Champions League dream may be over but there's a lot of season left to play. With the same pride and fight that led the team to a historic European campaign this year, it could still be a memorable one yet.