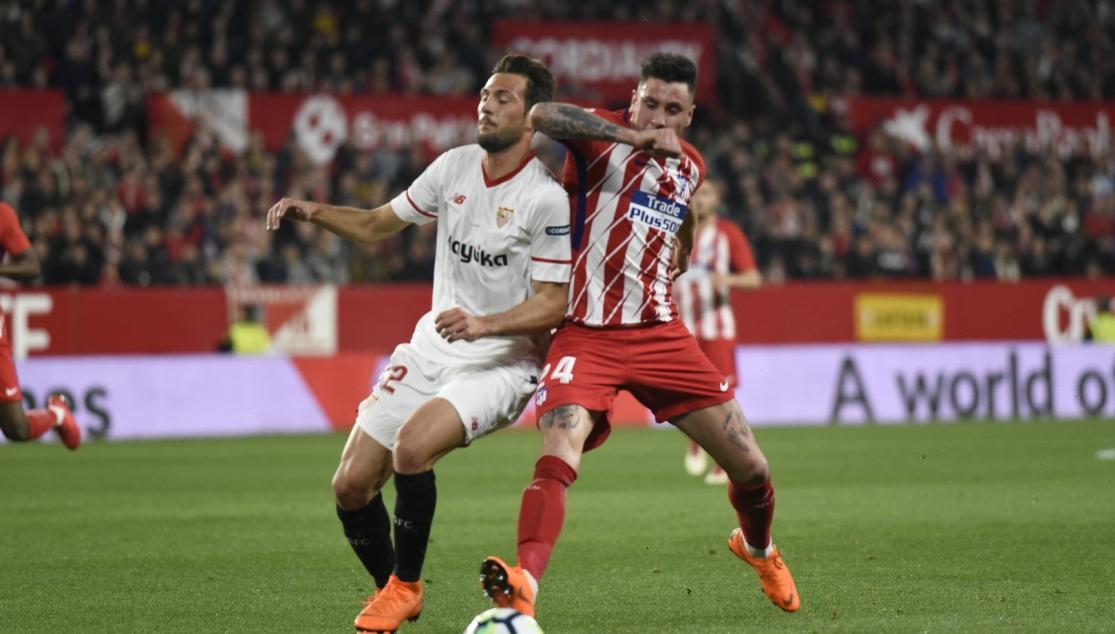 2-5: PUNISHED AFTER A PROMISING START

Sevilla FC fell to a tough defeat at home against Atlético Madrid this Sunday night. A hat-trick from Griezmann, plus goals from Costa and Koke would put the visitors five up, and would create far to wide a gap for Sarabia and Nolito's consolation goals to matter. A reaction will be needed this Wednesday against Málaga

The third consecutive win wasn't to be. Sevilla FC fell to a deflating 2-5 defeat this Sunday night against Atlético Madrid, who unlike Sevilla were able to take their chances when they came. Ironically, Sevilla came out the brighter of the two sides and created chances to kick-off but following Jesús Navas' injury on quarter of an hour - which forced the Nervionenses into a change - Sevilla lost their rhythm. Sevilla would make individual errors to gift goals to the visitors, with Antoine Griezmann taking advantage to score a hat-trick, Diego Costa grabbing the opener and Koke also getting on the scoresheet. Sarabia and Nolito found consolations for Sevilla in the final ten minutes.

A tough pill to swallow, especially given Sevilla's Copa del Rey effort against the same side just weeks ago. Just three minutes in, Muriel had a chance to impose the same superiority Sevilla had ended with in that quarter-final tie. Jesús Navas broke free and fired the ball across the box but, with just Oblak to beat, the Colombian fired too centrally, giving the Atlético keeper the chance to keep the scores level. In the opening stages, it seemed as though Sevilla were on top but an injury to Jesús Navas sixteen minutes in would prove to be an unfortunate turning point in the game. Forced off through injury, Navas was replaced by Layún and Sevilla lost their stride.

After a bright start, Sevilla were forced to substitute Navas and would eventually be punished by an opportunistic Costa

To make things more difficult, indecision between Sergio Rico and Banega allowed Costa to finish with his left - having been alert to the defensive lapse. Sevilla now needed to do the most difficult thing against Simeone's side... score. Atleti had the game where they wanted it and would go on to widen the deficit before half-time. A stunning individual effort from Griezmann would give the visitors their second - his right-footed wonder strike gave Sergio Rico no chance at all and gave Sevilla a mountain to climb. Two behind and heading into the break, the Nervionenses would need to push for something special.

Unable to do so, almost immediately after the restart, the hosts would gift Atlético a golden chance from the penalty spot to kill the game dead. Griezmann would step up and make no mistake. Montella looked for a reaction through Ben Yedder (subbing off Correa) but it wasn't to be his night either. Atlético seemed extremely comfortable with the ball and never looked in true danger when defending. Koke would be the next to join the Atlético scoring party, again taking advantage of poor communication from the Sevilla backline.

Changes would be fast coming. Montella would sub Franco Vázquez for Nolito after the Argentine picked up a knock but it was too late for the ex-City forward to turn the game around. With just ten minutes to go, Griezmann would complete his hat-trick - finishing calmly after a crucial ball from Saúl showed Sevilla's defence to be unfortunately thin. Far from turning against their side, the Nervión faithful would never stop cheering their side on, something which, in all likelihood, would push the home side to grab two consolation goals in the final minutes.

With every Sevillista still running for every ball, the Nervionenses would finally break the Atlético defence down through Pablo Sarabia, who was finally able to find a way past Oblak; Nolito would give Sevilla a second with a fierce strike but with two minutes left to play, it was well and truly too late. There is no time to rue missed chances. Sevilla return to La Liga action this Wednesday when they travel to Málaga. A reaction will be needed.