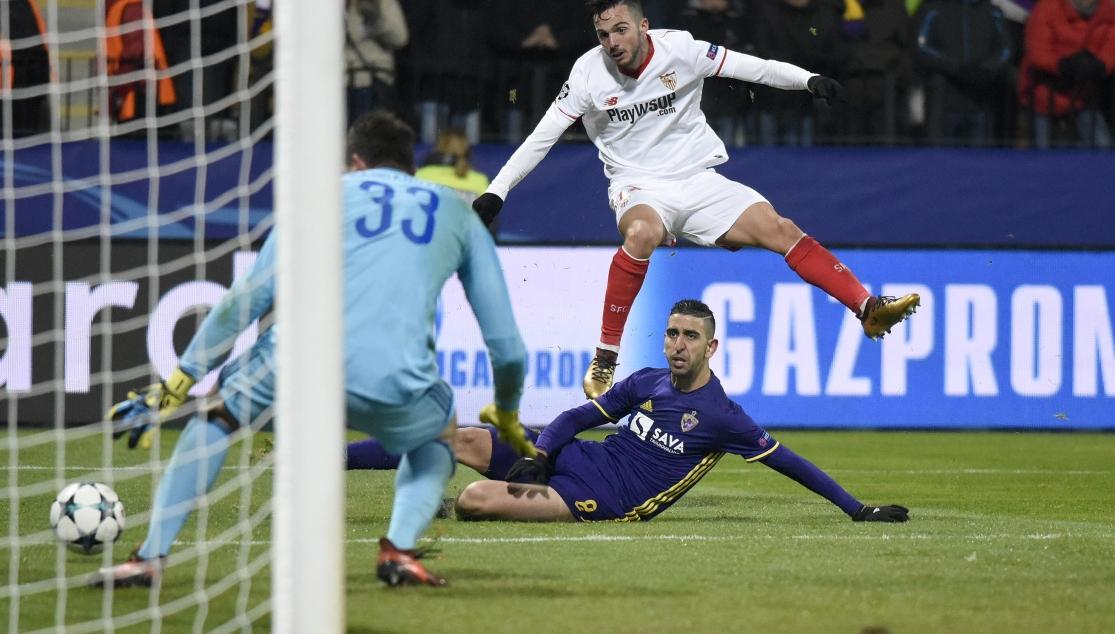 1-1: THROUGH TO THE LAST-16 AFTER A HARD-FOUGHT POINT AGAINST MARIBOR

An equaliser from Ganso allowed Sevilla FC to pick up a point in Slovenia that put the Nervionenses through to the last-16 of the Champions League - though Liverpool's demolition of Spartak had already guaranteed progression. In a match dominated in possession by the visitors, Tavares' early goal needed cancelling out 15 minutes from time

Sevilla went to Maribor looking for a win though after an early goal from Tavares, the visitors would need to work hard to turn their dominance into a goal and guarantee that progression to the last-16 of the Champions League was achieved on the Nervionenses' own terms. A goalkeeping mistake 15 minutes from the final whistle allowed Ganso to level the scores and rounded off a group campaign that sees Sevilla qualify as second in Group E alongside Europe's 15 best clubs.

Sevilla came out knowing that qualification would only be at risk with two disasters in two different stadiums. In the very early minutes, dominance was already clear. Maribor were already camped in their area whilst Liverpool put themselves 1-0 up early through a Coutinho penalty. It looked like it was going to be a calm affair in both fixtures but Maribor's first chance of the game would lead to an early goal for the hosts. A Milec cross from the left found the Brazilian Tavares, who found free space and made no mistake at the back post.

The blow at least arrived with calming news, with Liverpool 3-0 up against Spartak within no time at all. Sevilla kept possession but the Slovenians were organised and put two firm lines behind the ball. An effort from Ever Banega from range was the highlight of a tricky half which saw the hosts break dangerously on more than one occasion. Unable to widen the margin, the score stayed 1-0 until half-time.

There wasn't a big change in the pattern of the game come the start of the second-half but a more determined Sevilla emerged from the changing-rooms. It took just three minutes for Banega to fire a warning shot that Handanovic did enough to deny. Marcucci didn't take much time in making a substitution, replacing Krohn-Dehli with Ganso early on after the restart.

Ganso was the scorer of the equaliser that Sevilla's dominance deserved

Escudero tried his luck from range and Sevilla continued amassing possession and chances, though they were still unable to break their deadlock. Ironically, it was through Sevilla's least convincing effort that the equaliser arrived. The ball fell to Ganso after Correa had won it back and the Brazilian midfielder sent off a curling effort from 20 yards. Though his strike may have had spin, Handanovic would have been disappointed to see the ball slip from his grasp. Sevilla had their equaliser. The equaliser seemed to emphasise the home side's loss of conviction, but an opportunity to secure a win did not present itself despite Navas, another of Marcucci's substitutions, coming out fighting.

The spectacularly wide goal margin in the Liverpool Spartak clash secured Sevilla FC's place in their group and therefore saw them qualified for the last 16, with the draw scheduled for next Monday at 12pm in Nyon.