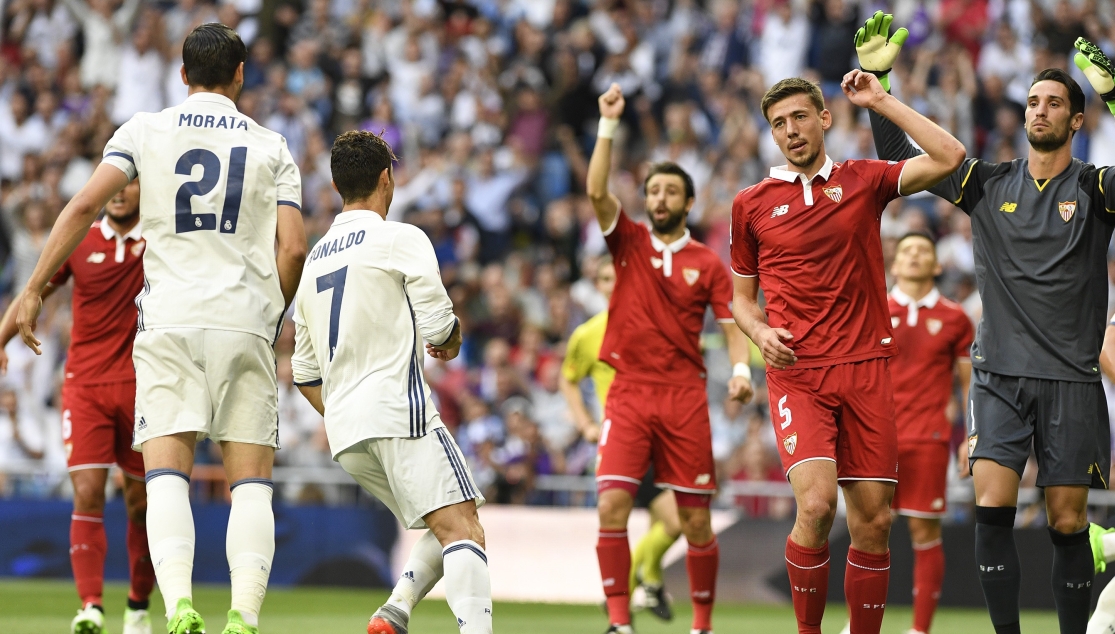 4-1: SEVILLA BEATEN AT THE BERNABÉU

Sevilla’s place in the Champions League next season was confirmed on Sunday night despite a 4-1 defeat against Real Madrid.

Villarreal’s draw against Deportivo means that Sevilla are five points clear of the Villarreal with one game to play, to secure a third consecutive season among Europe’s elite.

Madrid took the lead on ten minutes through Nacho before Cristiano Ronaldo doubled the advantage 13 minutes later. Stevan Jovetić then pulled one back for Sevilla just after half time, before Ronaldo scored his second and Toni Kroos put the game to bed on 84 minutes.

The scoreline was not a true reflection of Sevilla’s performance at the Santiago Bernabéu, which started at a frantic pace when Ronaldo saw an acrobatic effort go wide of Sergio Rico’s goal.

Alvaro Morata then tested his Spain international teammate, but Sergio Rico did well to smother the ball when the Madrid forward looked to take the ball around him.

On the back of securing their place in the Champions League final, the hosts were in buoyant mood and their early pressure told when Nacho dispatched a free-kick in controversial fashion.

Daniel Carriço fouled Marco Asensio on the edge of the box and the referee blew for a foul, before Nacho took the set piece while Sevilla were looking to organise their defensive wall.

Despite Sevilla’s protests, the goal stood and Jorge Sampaoli’s side went close to responding in perfect fashion when Joaquín Correa found Jovetić unmarked in the box but the forward was unlucky to see his strike come back off the upright.

Jovetić again tested Keylor Navas in Madrid’s goal with a low strike towards the far post, but the ‘keeper was equal to it and parried with his feet.

Despite being two goals down, Sevilla were having the better of the chances

And Madrid made the most of Sevilla’s misfortune when Asensio took the ball off Matias Kranevitter in midfield and drove forward to find James Rodriguez. The Colombian’s shot was well saved by Sergio Rico but Ronaldo was there to convert the rebound to double the lead.

Despite being two goals down, Sevilla were having the better of the chances and again went close to responding when Michael Krohn-Delhi – making his first start since April 2016 – found Correa whose shot was saved by Navas when a pass to Vitolo might have been the better option.

Seconds later Jovetić went even closer when Vitolo played him in, but his chip that had beaten Navas all ends up came back off the crossbar.

The on-loan Inter Milan striker was in blistering form and had another opportunity just before half time after a clever one-two with Correa, but this time his stabbed effort was saved by Navas.

Walter Montoya replaced Nico Pareja at half time and Sevilla continued to push for a response, with Jovetić causing a constant problem for Madrid’s central-defensive partnership of Sergio Ramos and Raphael Varane.

On 49 minutes his persistence finally paid off when intricate build up play between Steven NZonzi and Correa afforded Jovetic the space to fire a low effort past Navas and into the far corner.

The goal confirmed Sevilla’s foothold in the game and prompted Zinedine Zidane to introduce Casemiro in the heart of midfield.

The two sides were evenly matched for 20 minutes before Ronaldo put the game beyond Sevilla’s reach on 77 minutes.

Kroos reached the byline with a driving run before pulled the ball back to the Portugal international who unleashed an unstoppable strike into the top corner.

The strike knocked the stuffing out of Sevilla and the home side and Kroos got on the scoresheet on 84 minutes with a site-footed finish past Sergio Rico.