Sevilla took the lead after 7 minutes and contained Barcelona well when they had to. Kanouté doubled the advantage at a key point in the game and the Andalusians ended up putting three past the team often called the best in the world. It was the final of our dreams. 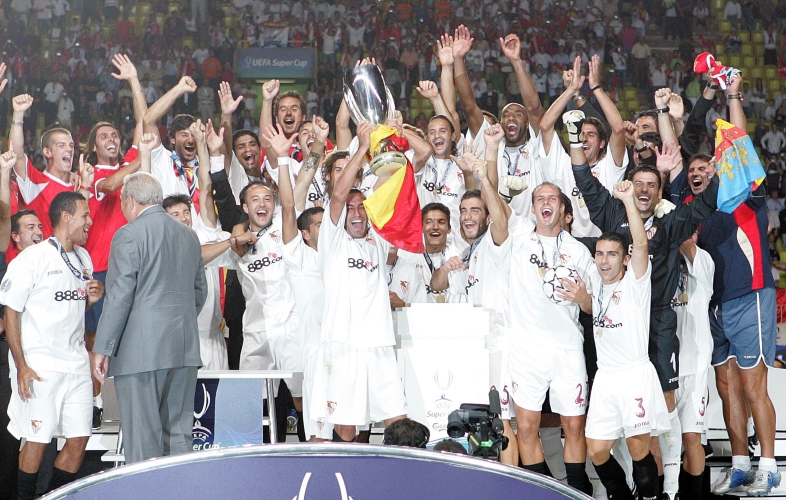 In the build-up to the final, Sevilla were determined to stand up to Goliath. It turned out even better. They scored early. They held out against the onslaught that came at the end of the first half. They took another step towards victory with Kanouté’s goal just before half-time, and there was more of the same in the second half. Sevilla dominated against a Barcelona side who found themselves up against a rock solid wall. Maresca finished it off…The rest is history: Sevilla are champions.

There were a couple of doubts regarding the starting line-up going into the game, but in the end Juande Ramos opted for the following. Palop in goal, David Castedo and Dani Alves at full-back with Escudé and Javi Navarro at the centre of defence. Jesús Navas, Renato, Poulsen and Adriano made up the midfield while Luis Fabiano got the nod to partner Kanouté up front. 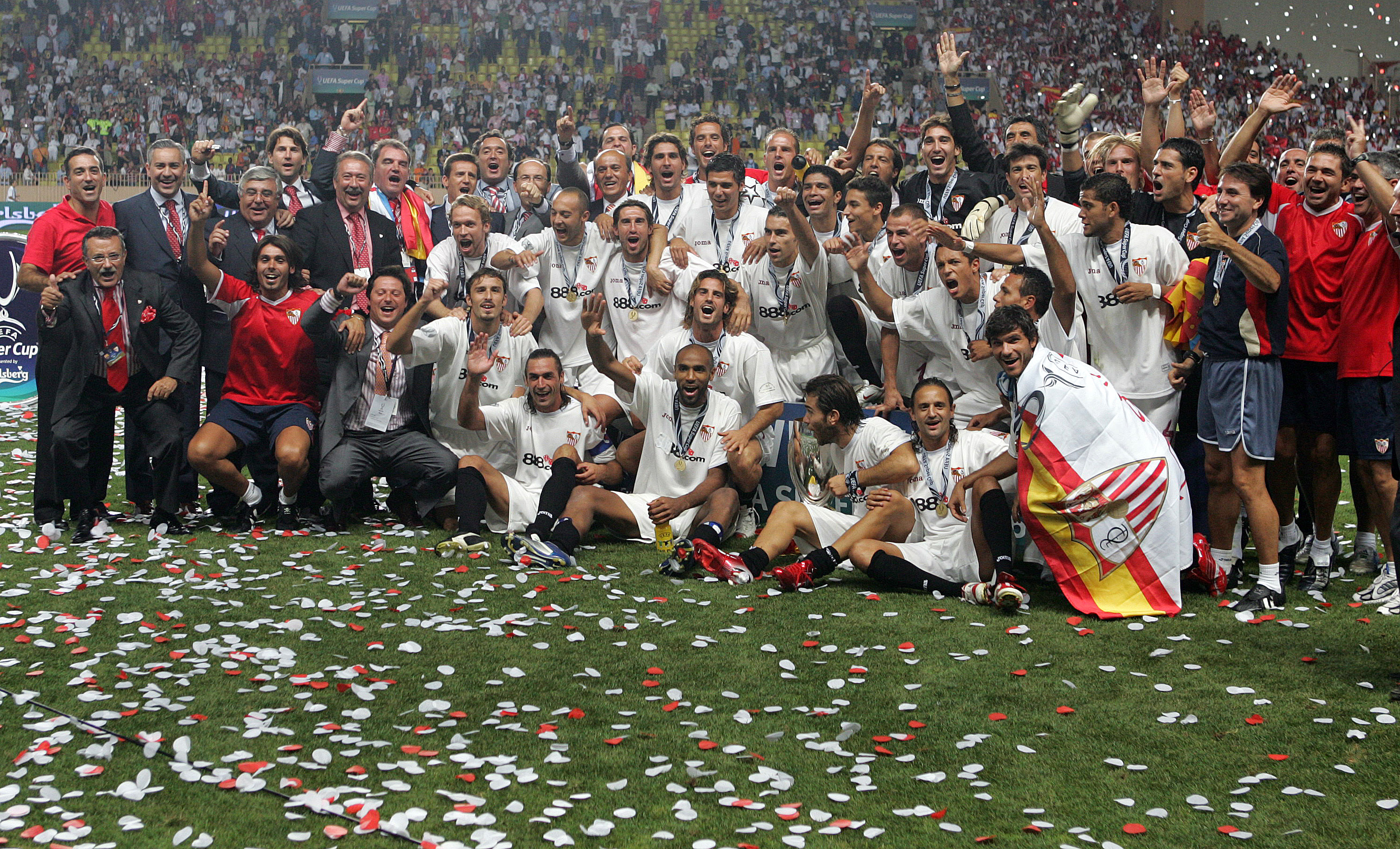 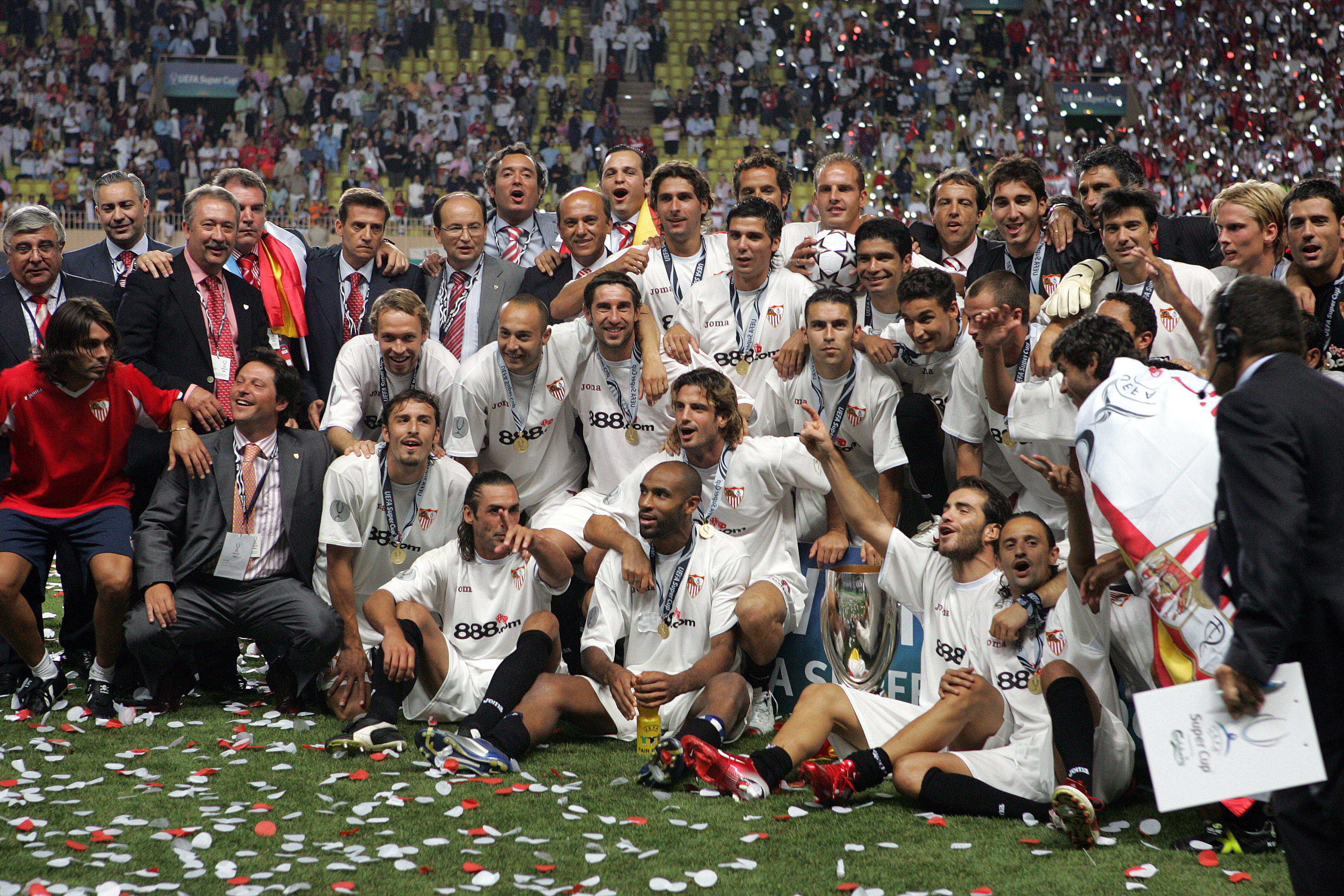 Sevilla were much more switched on right from the start. Barcelona had the ball, but the Andalusians waited patiently for their chance to counter. Luis Fabiano gave them a warning with a header which was kept out by Víctor Valdés. But the Barcelona ‘keeper couldn’t do anything about Renato’s strike in the 7th minute, pouncing on the opportunity which presented itself after Luis Fabiano’s initial shot had been saved. 0-1.

Barça looked shaken. Sevilla didn’t. They were defending bravely and attacking with purpose. On another counter, Navas put the ball into the box and Luis Fabiano’s header narrowly missed.

Sevilla were much more switched on right from the start

The Catalans didn’t trouble Sevilla until after the half hour mark. Ronaldinho’s brilliance left Eto’o in space, but his shot was blocked and reached Palop with little pace on it. Barça went up a gear, although Juande Ramos´s side dealt with the pressure well, particularly the centre-backs, who were never caught out of position. Palop was also there when required, as Eto’o tried his luck from outside the box.

Despite the period of pressure, Sevilla doubled their lead towards the end of the first half, taking another huge step towards the trophy. Valdés dealt with the initial ball in from a corner, but Navas headed it back into the mix from outside the area and Kanouté flicked it with his head, sending the ball into the net, sparking huge celebrations in the stands and making it 0-2. The Super Cup was in sight. It may well have been true that the so-called best team in the world was in front of them, including Ronaldinho and company… But this is Sevilla… And this was their night.

The Andalusians started the second half strong, with Marí on for Luis Fabiano to reinforce the midfield. In the 65th minute, Sevilla could have put the match to bed. Renato pounced on the ball and, with Valdés beaten, the Brazilian’s header went just wide, grazing the post on its way out.

The Catalans kept attacking, but time and again they came up against a solid Sevilla wall, led by a tireless Poulsen, who continuously frustrated the Barcelona attack. Sevilla responded, with both Navas and Adriano having chances to get the third for the Andalusians. Time passed and Juande Ramos´s men kept going, playing their game. Step by step, minute by minute, the trophy was getting closer. And the victory was confirmed in the final moments, when Puerta won a penalty which Maresca converted confidently to make it 0-3.

And the clock kept going. And full-time came. And Sevilla were the champions. The fans were bouncing. David had beaten Goliath. Sevilla had pulled it off with heart and drive. Sevilla FC… Winners of the European Super Cup.

GENERAL: 2006 European Super Cup, played in Monaco on 25 August in front of 17,400 spectators. Prince Albert attended the game. Dani Alves was selected as man of the match.