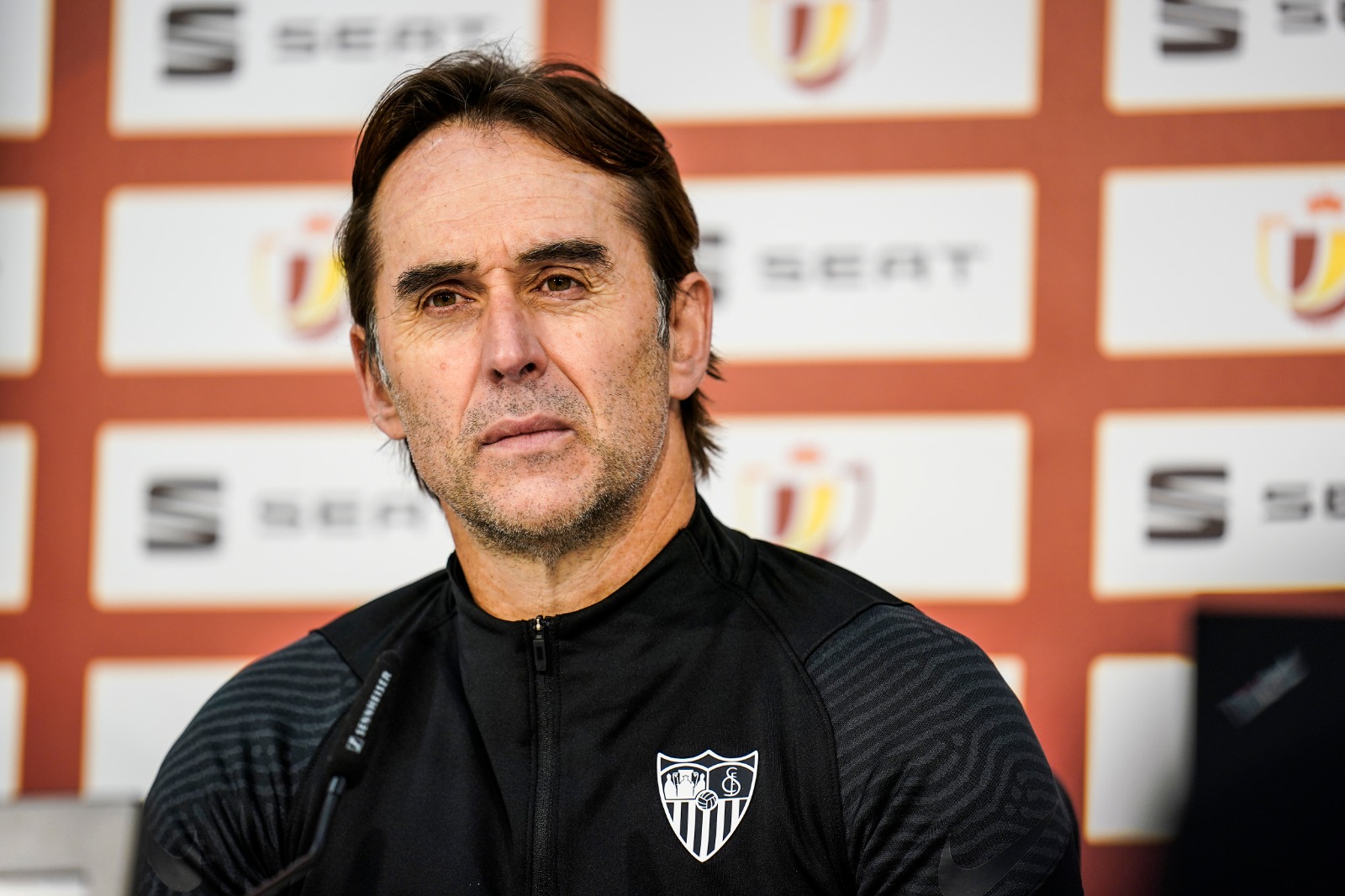 LOPETEGUI: 'WE WANT TO BE AT OUR VERY BEST FOR A MATCH OF THIS MAGNITUDE'

Entradilla
The coach said the last league visit to the Camp Nou means nothing: 'The game was a long time ago. Even if it's the same team, it came in a different moment and in a different competition'
Cuerpo Superior

Julen Lopetegui appeared before the media this Tuesday morning to speak about tomorrow's huge match in the Copa del Rey against FC Barcelona: 'It's a great tie, we're really excited for what will be a tough match against a tough opponent who are in great form. We are aware of the difficulty of the match but we are focusing on ourselves. It will be a challenge, but we intend to overcome the difficulties and compete against Barcelona.'

Lopetegui was asked about Jesús Navas and immediately ruled him out: 'Jesús won't be available. It's been a tough season playing every three days since 18 September when we only had five days off for pre-season. We cannot change that. It's tough for everyone, even more so for teams who had even less time off than we did, but we can't change that and we have to focus on how we respond to the situation by using our resources as best we can and using our motivation to push us forward.' Julen was later asked about what injury Navas had: 'The doctors will have to explain it. He has some niggles that are being treated and until I'm told otherwise he is out. I hope he can return as soon as possible.'

Julen was asked about the team's strong performance earlier in the season at the Camp Nou, but he refused to see comparisons: 'The game was a long time ago. Even if it's the same team, it came in a different moment and in a different competition. Teams evolve throughout the season and they are in good form at the moment, as are we. We go into a game of this magnitude full of confidence to play our best.'

Lopetegui addressed Lucas Ocampos' injury, admitting it was a tough blow even though it could have been much worse: 'Ocampos' injury is a huge blow for us. He's going to be out for a while and in a key moment of the season. Lucas is very important for us and plays almost every game. We can't sit and bemoan injuries though, we have to look what solutions we can find and give confidence to the players who will replace him. He will be out for a while and looking back won't help us. It's a result of this strange, unique season. You have to keep adapting.' Julen also wished to leave the controversy of the last game behind: 'I've said everything I had to say about the game at the time. We are focused on a huge match tomorrow and the only victim of the whole thing was Lucas Ocampos.'

Asked about tomorrow's opponent, the coach stated 'they are in good form, not just Messi. A lot of them are playing at a very high level. But so are we. I think we'll treat people to a great match tomorrow with the added bonus of it being a semi-final and the motivation that playing against Barcelona gives us. They are a great team and then they have Messi as well. They have top players who support the best player in the world. While we respect our opponent, we will focus on ourselves and figure out how we can play our best. I feel that Koeman is doing a very good job.'

'I feel that Koeman is doing a very good job'

Regarding the changed format to two-legs, Lopetegui did not want to consider other alternatives: 'It's not about what we want. The competitions are designed with the best intentions, especially within this unusual season. We adapt to the situation. I don't waste time considering if it's the best format or not. Now we have to play over two legs and we will prepare ourselves for the first leg tomorrow.' To finish, Julen was asked about Koundé's development: 'Jules has been with us for a while now and he's progressed and grown a lot. He has to keep doing so given his age and potential. He has the correct mentality which I'm sure will help him keep developing.'