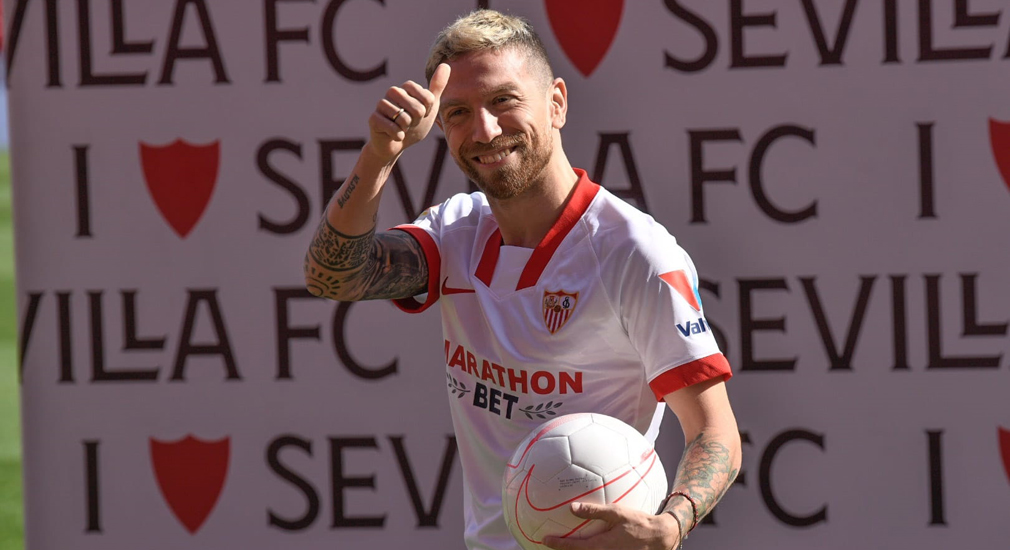 PAPU GÓMEZ: 'IN A CLUB THIS BIG IT'S NORMAL THEY DEMAND A LOT OF YOU'

Entradilla
The Argentinean made it clear he was ready to adapt: 'I've played in all positions from midfield and up in recent years. I will play wherever the manager puts me.'
Cuerpo Superior

Papu Gómez' arrival at Sevilla FC has been one of the most talked about moves this winter transfer window. A huge excitement and expectation has been aroused both amongst Sevilla fans and the player himself, who attended the media this afternoon to talk about the latest move in his career: 'Yeah, it's been all a bit sudden. It's a new adventure for me to come here to such a big club in Sevilla. It's a big life change with moving to a new country, but I'm so happy and excited.' He is not shying away from the expectation, and thanked the president for the warning that he would be demanded as much as he would be loved in Sevilla: 'When you come to a club as big as Sevilla, I think it's normal they demand a lot of you. I'm really happy and motivated with what the president said. The stadium had a big impact on me, it's really stunning.'

A lot has been said about an interview just under a year ago in which Papu said he would like to play in Nervión one day: 'I don't know if it's fate or destiny, but I've played with a lot of players who played here and have lived in the city. They always said really nice things about Sevilla the club and Seville the city. So when they asked me first which club I'd like to play for it was natural to say Sevilla when I've heard such nice things about the club and city. It's a crazy feeling that now I'm actually here.' He also spoke of the link between Argentina and Sevilla: 'This club has a beautiful history with Argentinean players. I think all of them left a mark here and I hope I can do the same. For an Argentinean, it's an honour to wear the same shirt that Maradona wore.'

He admitted there were some similarities between his old and new team, although he recognised Sevilla's growth has been going on for a bit longer: 'Obviously Sevilla have been getting into the Champions League more recently and have won a lot of European trophies. They have had this jump in recent years but there is a link that this provincial, or maybe not traditionally big club wants to be fighting at the very top and has the ambition to be up there. I think that Sevilla has been doing a great job of that recently.' Papu has no intention yet of stopping competition at the highest level: 'Finances never really came into it for me, honestly. I had chances to leave Atalanta in previous years from teams in the Middle East. I've always tried to prioritise the part that makes me happy, the footballing side. I have time for other things later on and I think I'm in a good moment now, I'm feeling more mature in both my professional and personal life. I wanted to keep playing at a high level, trying to get a call up for my national team. I wanted to try myself in a league such as La Liga and for a team of the level of Sevilla. So when the chance to come here arose I didn't need to think twice about it

'For an Argentinean, it's an honour to wear the same shirt that Maradona wore'

Without knowing it, Papu's story with Sevilla actually starts from a young age: 'My uncle, Hugo Villaverde, played with Bertoni in Independiente. He played there for a long time and won a lot. I think that's where my desire to become a footballer came from. I've been playing football since I was very young and I only had football in my mind. All I ever wanted to be was a footballer. Maybe I did have a harder time than other players who managed to make a bigger step up when they were young. Things went a bit more slowly for me and I played in some smaller clubs, but I always helped them grow. In the last few years I've had this boom with Atalanta, which saw my career grow a lot, leading to this huge step in my career to play for Sevilla.' Another sign of destiny was his relationship with former Sevilla player, Diego Simeone: 'Cholo was very important in my career as I knew him when I was a bit more rebellious. I was only 20 years old and wanted to do things that I thought were ok but they were not. Cholo, with all his experience, helped me a lot, especially as a footballer. He always told me how I'd have to play when I went to Europe and I would always say I didn't want to play like that. Catania ended up buying me to play in the way that Cholo had taught me. And then he ended up at Catania. As a manager he helped me grow a lot. I really respect and admire him and all of his coaching staff.'

Between Catania and Atalanta, Papu spent a season at Metalist: 'I don't know if I would call it an error but I thought I'd given a lot for Catania and I didn't think the team would grow more. I'd spend three good years there and I needed to make the step up to a bigger club. Cholo wanted me at Atlético, Inter wanted me, but the opportunity didn't materialise. So the chance to move to Ukraine came about. The club was playing in Europe, they had Argentinean players. The finances were good as well, I was going to earn a lot more than in Catania. So I decided to go even though I was still young. In the end it didn't work out too well. The club couldn't play in Europe and the civil war ended up breaking out in the country. It was a tough combination that caused me to return to Italy after just a year.'

Papu is active on social media: 'I am as you see me now. I try to be as transparent as possible. I don't like to be fake, I say what I think and feel. I'm not two-faced.' He also spoke about the excitement amongst Sevilla fans on social media: 'I've followed Sevilla for a long time in Instagram to see results and news so it's exciting and motivating for me to see all the love from the fans.' He also spoke about the famous Papu Dance: 'It came about with some Italian YouTubers and we had the idea to do it with the song to help a school of children with disabilities. We just wanted to try it out but in the end it exploded and went viral. I'm really happy with how it went, we went gold and platinum. I never thought it would reach that level but the song turned out really well. Although, it did get a bit tiring when I went to birthday parties with my son's friends and instead of children's songs they put mine on!'

His physique influenced in his idols as a child: 'It's a tough question, but I've always said I wanted to be like Pablo Aimar as he was the main player in my position and in the 2000s he was playing for River Plate when I was 12 years old so I was growing up waching him. So I always tried to imitate those kinds of players: Aimar, D'Alessandro, Saviola, Ariel Ortega.' Returning to the present, he said it won't be long before he's 100% fit: 'I definitely need match fitness and to play ninety minutes again but I was training with Atalanta's second team, so I just need to get back into the swing of playing games again.' Papu stated he was happy to play wherever Lopetegui puts him: 'In recent years, I've played everywhere from the midfield and up so just wherever the manager wants me to play. I've played on the left, right, in the middle, as a number ten, a deeper midfielder...'

'I've played everywhere from the midfield and up. I'll play wherever the manager puts me'

Many people feel Papu could replicate Banega's role in the team. He stated they are different players but he is not afraid of the comparisons: 'It's an honour for me to be compared with Éver. We've known each other since we were young and he's brilliant. We are a bit different as players but that kind of responsibility, leadership, I've had it at all the clubs I've been at and I love it. I love being the player who makes the decisive pass or decisive play so it's a nice responsibility for me.' He is 32 years old but sees himself playing for longer: 'I think players play a lot longer these days. If you look after yourself, and you have luck with injuries, any player who wants to and trains and rests well can easily play up until 38 or 39 years old. It's also down to ambition if you want to play every three days at the highest level. You have to know your body well to be able to do this, have a good life style, eat well, rest well. But I think the most important thing is your mindset and ambition. There's players of my age or even older who are still making the difference.'

He has just arrived, but he has already seen things he likes: 'It's a very organised and serious club with people who give their all for the team and the city. I can see the directors and players are all very determined and I can't wait to get started.' He finished by talking about his objectives at Sevilla: 'Coming to a new league will definitely be a challenge for me. Getting to know how you play here in Spain, although I've always admired Spanish football. I think it's going to be beautiful spell. What I want more than anything is to achieve great things for Sevilla and to help the club grow.'