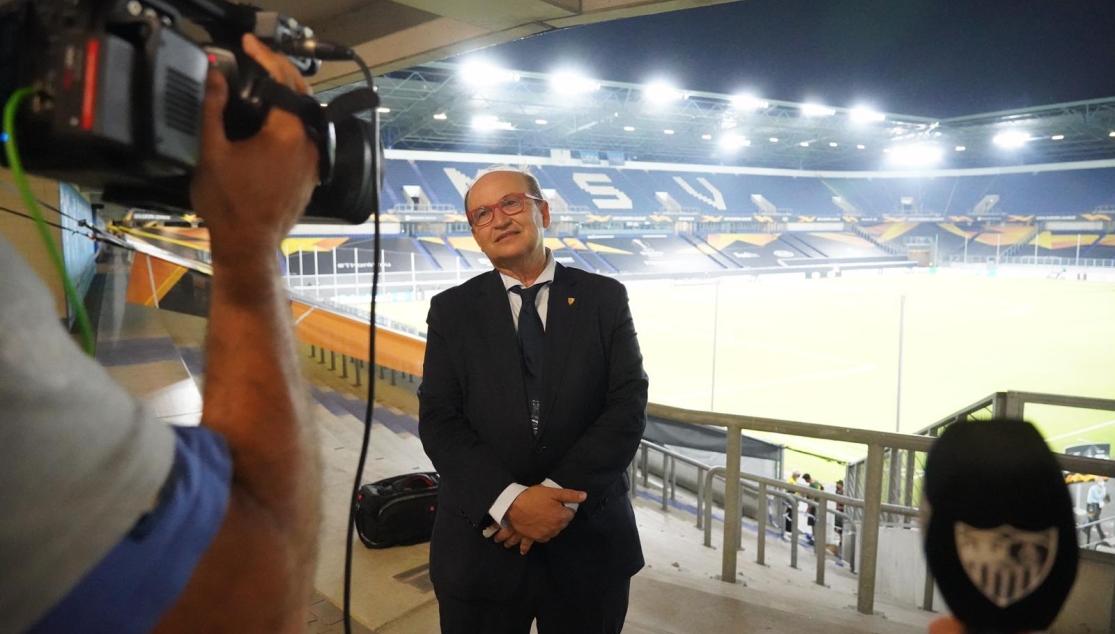 200 WINS FOR CASTRO AS CHAIRMAN, WITH ANOTHER EUROPEAN SEMI FINAL ON THE HORIZON

Since he took the role in 2013, the team has played in ten finals, lifted three European titles and have qualified for the Champions League four times and the Europa League three times. The win percentage is 52.3% and the unbeaten percentage is 73.5%

The Sevilla FC Chairman has also reached a milestone after Julen Lopetegui's win against Wolverhampton Wanderers on Tuesday night. That win now means he has 200 since he took the role at the club in 2013. 123 of those have come in LaLiga, 40 in the Europa League, 10 in the Champions League and 27 in the Copa del Rey, giving him a win percentage of 52.3%. By adding 81 draws, the unbeaten percentage works out at 73.5% of matches unbeaten (281/382). The unbeaten record in LaLiga is 72.5%, rising to 83.3% in the UEFA Europa League.

By season, the 2014/15 season stands out, with the team winning 39 matches and scoring on no fewer than 123 occasions in their 60 matches, which is not even the most matches they have played in a season in these seven years.

Since 2013, Sevilla FC have played in ten finals, lifting three trophies and qualifying for Europe seven times: three for the UEL and four for the UCL

That spring, Sevilla FC lifted their fourth UEFA Europa League, the second of his reign, in Warsaw. A year before, they had done the same against Benfica in Turin and would go onto repeat it in 2016 against Liverpool in Basel. Those are the three titles that José Castro's Sevilla FC have won from the ten finals they have reached: three in the UEL, three UEFA Super Cups, two in the Copa del Rey and two Spanish Super Cups.

In these seven seasons, the Nervionenses have secured qualification for Europe on all seven occasions, three in the UEFA Europa League and four in the UEFA Champions League, a competition where they would equal their best performance, appearing in the quarter finals, dating back to the 1957/58 season. That came in 2017/18, as Sevilla FC progressed to the last eight by knocking out Manchester United, Sunday's semi final opponents, before facing Bayern Munich.

Success has not just come on the field. A positive balance year after year at the AGM and a firm commitment to infrastructure are what marks José Castro's seven years in charge: comprehensive renovation of the Ramón Sánchez-Pizjuán Stadium, giving it a new image both internally and externally. Sweeping changes also came at the training ground, with a new and modern stand for the main pitch there, the Jesús Navas Stadium, the first of many changes as part of the project to build the José Ramón Cisneros Palacios Sporting and Business Campus.

It is also worth remembering that these works have not been done in vain. Thanks to the renovation of the Ramón Sánchez-Pizjuán and the club's new weight within UEFA, our stadium will host the 2022 UEFA Europa League Final. Another achievement for José Castro's time in charge, as the Bombonera of Nervión will be dressed up for a huge occasion and undergo further renovation, both in all stands, access points and the Preferencia stand.

Definitvely, great numbers for the club, and there are now just three days until another UEFA Europa League semi final as the kings of the competition look to continue making history by reaching the final with a win over a powerful opponent, Manchester United.