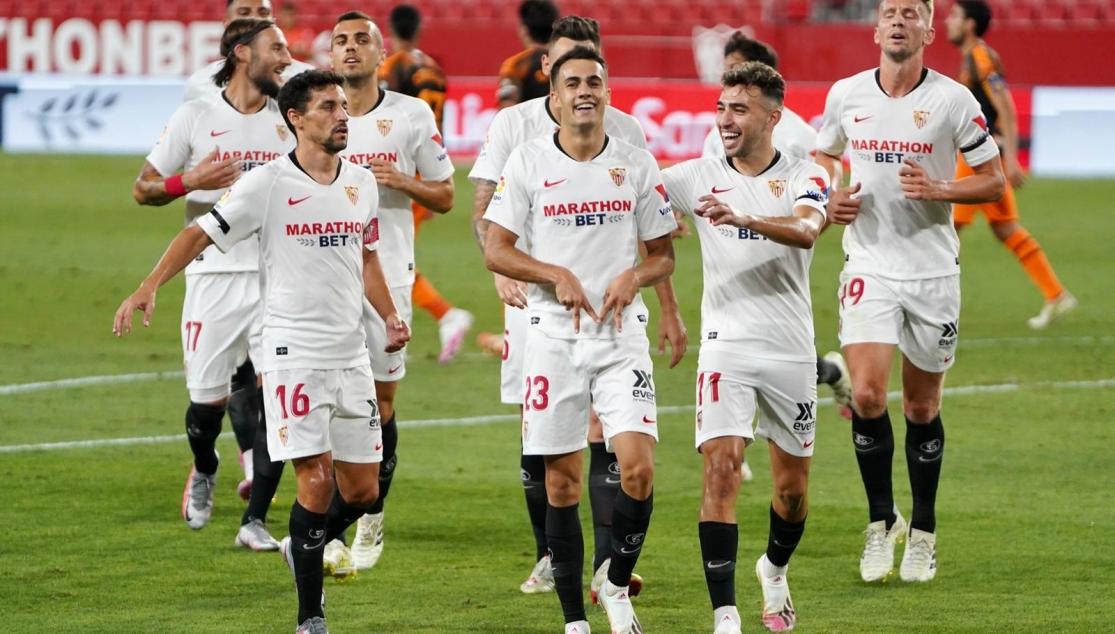 1-0: ROUNDING OFF THE SEASON IN STYLE

A stunning goal from Reguilón was enough to defeat Valencia. The three points meant that they finish the season level on points with Atlético, but goal difference sees Lopetegui's men finish fourth

Sevilla always compete, regardless of what is at stake. Finishing third was a difficult ask, and that task became even harder after Koke scored at the Wanda, but the team wanted to round off the season with another win, and they did so with a stunning goal from Reguilón, which meant that Valencia have finished the season outside the Europa League qualification places. A fourth place finish for Sevilla, level on points with Atlético on 70, and 24 clean sheets. An unbelievable season, with the Europa League up for grabs too.

The extreme heat was the first challenge that both teams faced. The match got underway at a high tempo but the pace of the game began to slow. Valencia only had chances from outside the box and the first chance came from Guedes, testing Bono from distance, before he picked up an injury and was substituted. Óliver Torres tried a similar effort ten minutes later, but Jaume diverted it away with his foot. As scorelines from elsewhere came in, not even a win was enough for Sevilla to finish third at this point. However, that would not stop this Sevilla side.

Chances were infrequent in the first half

Midway through the first half, Ocampos had what could be described as the best chance of the half, attempting a scissor kick after a good ball from Navas. Jaume had his body next to the post and managed to tip the ball out for a corner as the Argentine wheeled away to celebrate. The match began to slow down, but Lopetegui's men still got forward with relative ease. Despite this, it was still goalless, and Valencia came closest to opening the scoring. Parejo whipped in a dangerous free kick, but Bono was able to push the ball away despite a wicked bounce just in front of him.

The second half began with Valencia needing a goal for Europa League qualifcation. Sevilla however needed to score and needed Real Sociedad to come from behind at the Wanda. The second half had barely started when Reguilón played in Munir with a perfect ball, but Munir could only hit the post with his effort, which had Jaume beaten. Sevilla came out on top and pressed high up. Reguilón went close again, before opening the scoring. He won the ball with a perfectly-timed slide tackle in the box, got round Wass and Mangala before sublimely placing the ball in the top corner. A truly sensational goal.

The Nervionenses were still on top after scoring, and continued to dominate. With 15 minutes to go, Lopetegui decided to freshen up the side, with Suso and En-Nesyri coming on. With their European dreams fading away, all Valencia could do was play for pride, and went all out to score. Voro's men improved after their substitutions, but Bono was rarely troubled as Valencia looked for an equaliser.

The side dug deep to keep the scoreline as it was, and they did. Another win, another clean sheet, and another display of professionalism from a side who always want to improve. The squad will now have a week off before returning on Sunday ahead of the exciting challenge that is the UEFA Europa League. The spectacular league season has been rounded off in style, and there could be more success to come.