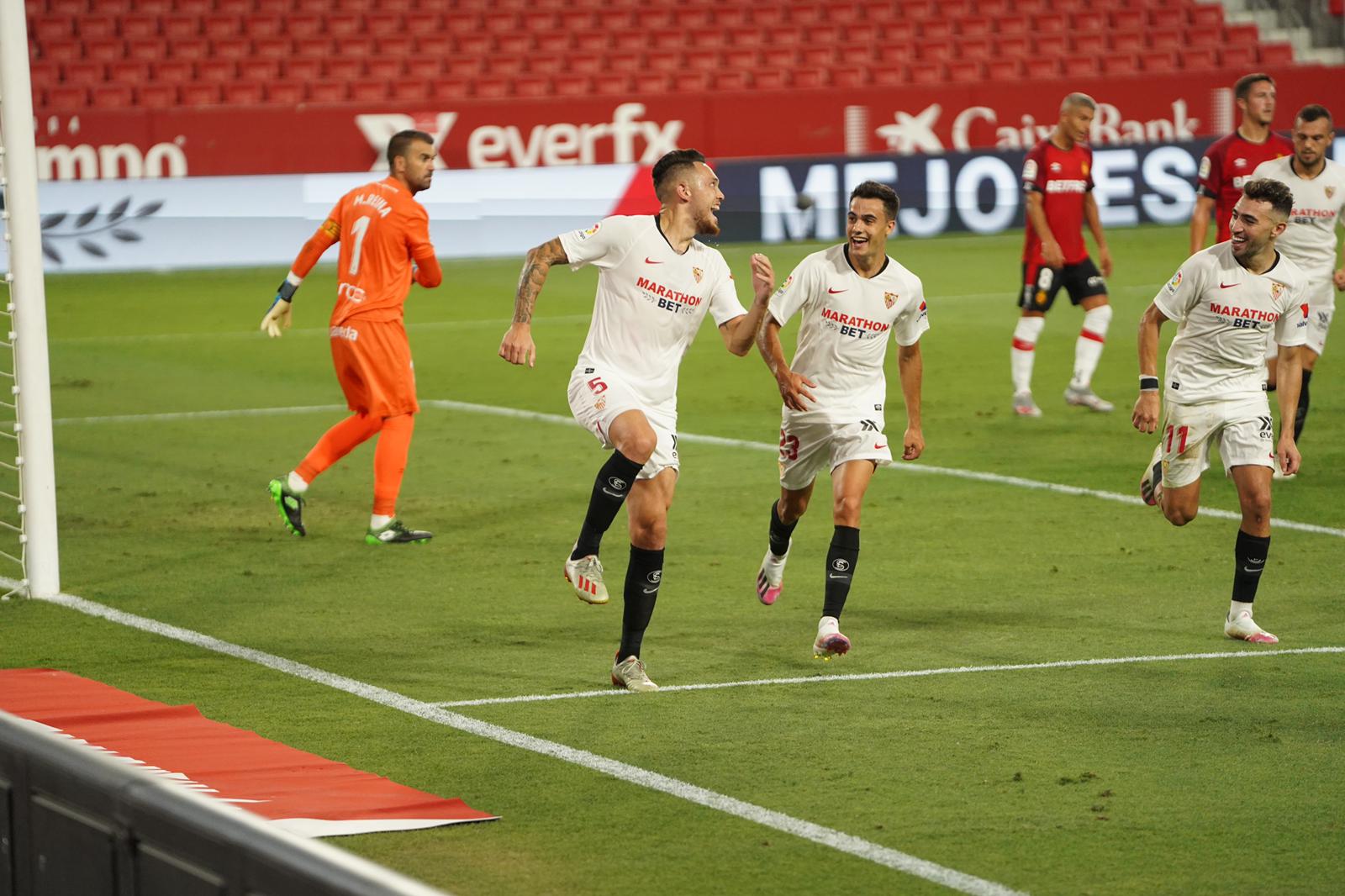 2-0: MOVING EVER CLOSER TO THE OBJECTIVE

Failure was not an option today. Sevilla did not let their fans down as they won again on Sunday night, their first weekend fixture since competitive action resumed, and those three points now mean they are on the brink of Champions League qualification. Ocampos opened the scoring from the penalty spot before En-Nesyri's glorious lob late on means Sevilla are now nine points clear of Villarreal, who have just three games remaining. The Yellow Submarine will have to win all their matches and hope Sevilla lose both of theirs to stop the Nervionenses qualifying for Europe's elite competition. Tomorrow, at La Cerámica, is the first opportunity to clinch qualification.

This was another hugely important game. At home, Sevilla's opening minutes have varied, and on this occasion they dominated straight from the off. The Nervionenses went straight into Mallorca, who barely had any opportunities to break on the counter and did not cause any problems. They defended well and in numbers too, making it difficult for Sevilla to trouble Reina despite their best efforts.

It was tough to create chances in the first half, but Ocampos broke the deadlock with a penalty

There were more incomplete moves than shots on goal for Sevilla. Fernando had the first real chance on the half-hour mark, as he saw two near-post efforts denied by Reina. However, the opening goal came a few minutes later. Reguilón's header in the area was blocked by the arm of Pozo, and VAR awarded the penalty, despite the lack of intention from the loanee. Ocampos stepped up and slotted home from the spot, sending the keeper the wrong way in the process.

Mallorca came out more offensively in the second half, knowing that a draw was not really enough for their survival hopes. Hernández tested Bono with a looping header, but Sevilla took advantages of the spaces in Mallorca's defence as they pressed forward. The Blanquirrojos needed a second goal, but their dominance was not enough to extend the lead. Lopetegui made changes as he looked for that goal, with En-Nesyri replacing Óliver before both Suso and Gudelj came off the bench.

Mallorca took risks in the second half, and paid dearly

Mallorca were still in the match, but they were unable to trouble Bono in the Sevilla goal. The Nervionenses were patient, and waited for their moment, which came in the 84th minute. It was direct play, and in its purest form. En-Nesyri got on the end of a long ball from Bono, and took advantage of Reina being off his line by casually looping the ball over him. 2-0, game over.

Sevilla will have to keep an eye on tomorrow's match at La Cerámica. If Villarreal do not win, the Nervionenses will definitely be in next season's Champions League with two games to spare. However, if Calleja's men do win, the side will have to wait until Thursday to secure qualification, either with a point in San Sebastián or if Villarreal fail to beat Real Madrid.