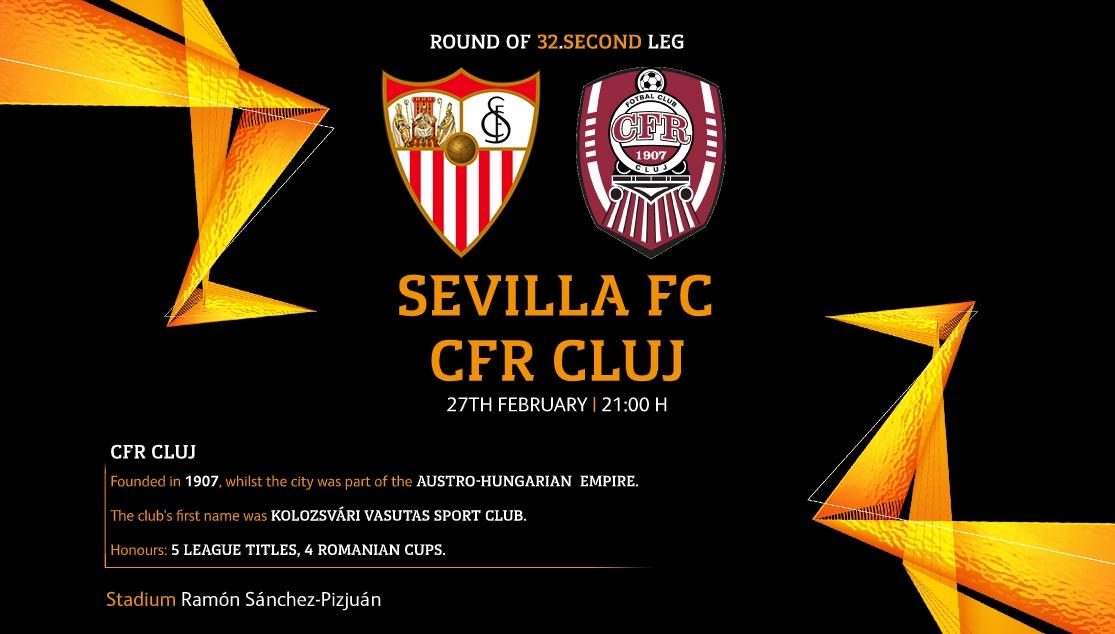 A week after Sevilla FC visited Romania for the away leg of their UEFA Europa League Round of 32 clash, the ball is now in other court this week as the Romanian side will visit the Ramón Sánchez-Pizjuán to round off this tie. After the 1-1 draw in the Constantin Radulescu, when En-Nesyri equalised late on for Sevilla after the home side had went ahead through a spot-kick, the Sevillistas will now be looking to make good on the slight advantage they have in their favour: the away goal. The draw a week ago obliges CFR Cluj to score at least one goal tonight inside the cauldron of Nervión; which will have to be once again in full voice to see their team progress.

The home side come into the game at a critical point of the campaign, with the team's confidence partially back after the demolition of Getafe in the Coliseum on Sunday. The 3-0 win away from home brought the smiles back on the faces inside the Sevilla dressing room. However, Joan Jordán warned in his press conference that "we haven't done anything yet; anything that has happened before now doesn't matter". On the other hand, the team who hail from Cluj-Napoca won at the weekend whilst they were in domestic action, something which has let them sit top of the table after the first half of the season. Due to the lead they already had, they were also able to rest a few of their main players with the return leg against Sevilla FC in the back of their minds.

Both managers, Julen Lopetegui as well as Dan Petrescu, referred to the seriousness of the game in their respective press conferences. Lopetegui said that his boys had the maximum ambition for the game, as well as being fully aware of the threats posed by Cluj - a team who have a very good away record. On the other hand, Petrescu recognised the fact that not winning at home gave the advantage in the tie to Sevilla FC; but that they had studied the Spanish side well and were ready to go out and achieve their objective. The winner of tonight's encounter will be in the hat tomorrow for the Last 16 of the Europa League, which will be drawn at 13.00 in Nyom.

The game will be played tonight, Thursday 27th February. Kick off at the Ramón Sánchez-Pizjuán is set for 21.00. The referee for this match will be Andris Treimanis, with Stuart Attwell in charge of VAR.