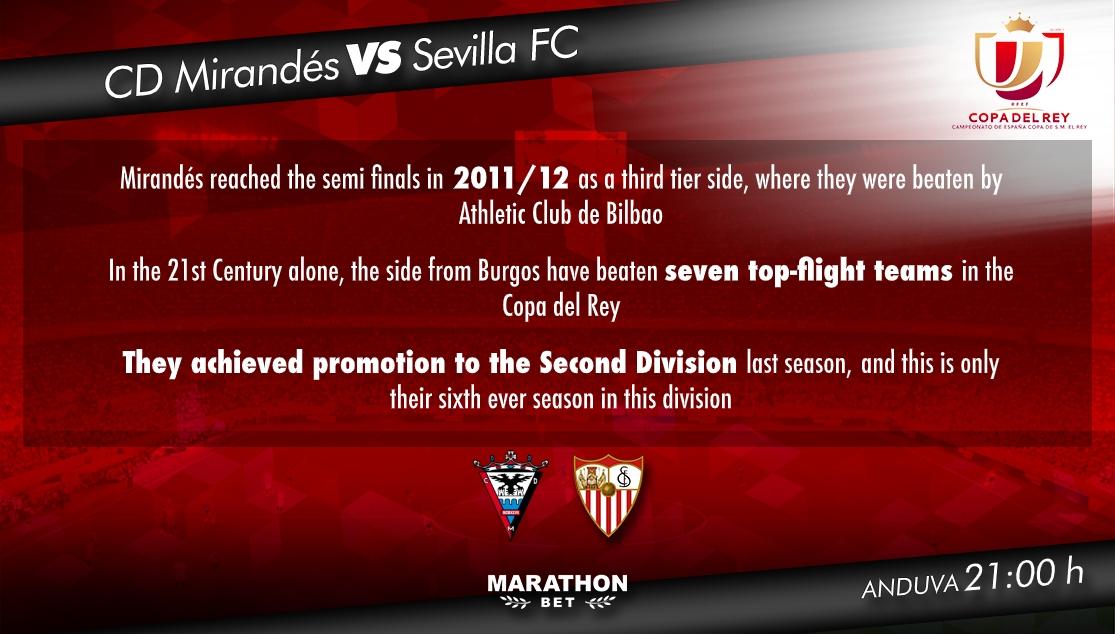 The last 16 of the Copa del Rey is here. Again, only a win tonight is good enough to be in the hat for tomorrow's quarter final draw. Sevilla FC visit CD Mirandés at the Anduva after winning two home games last week, beating Levante UD in the last round of the cup, before beating Andalusian rivals Granada CF in the league. At stake tonight is reaching the quarter finals, which, unlike the semi finals, is another single knockout match, something which serves as a real incentive not just for lower-league sides, but also for top-flight teams who know there are no second chances.

CD Mirandés really are a cup team, and have a very strong record of causing cup upsets this century, knocking out seven top-flight sides. They even reached the semi-finals in the 2011/12 season, when they were in the third tier, beating three top-flight sides before falling to defeat against eventual runners-up Athletic Club de Bilbao. They made their return to the Second Division this season, and are currently in tenth place, but they are just two points off the promotion play-off spots.

Julen Lopetegui has picked a travelling squad of 21 players for tonight's match, and the players spent last night in Vitoria before travelling to Miranda de Ebro. In his pre-match press conference yesterday, he highlighted the strength of CD Mirandés at home, where they have lost just the one match all season, against table-toppers Cádiz CF. The manager also emphasised how there are no second chances in the competition, and the need for the players to be prepared to give it their all".

The match will kick off tonight at 21:00 at Anduva. Jaime Latre, from Aragon, is tonight's referee, and Álvarez Izquierdo will be in the VAR room.