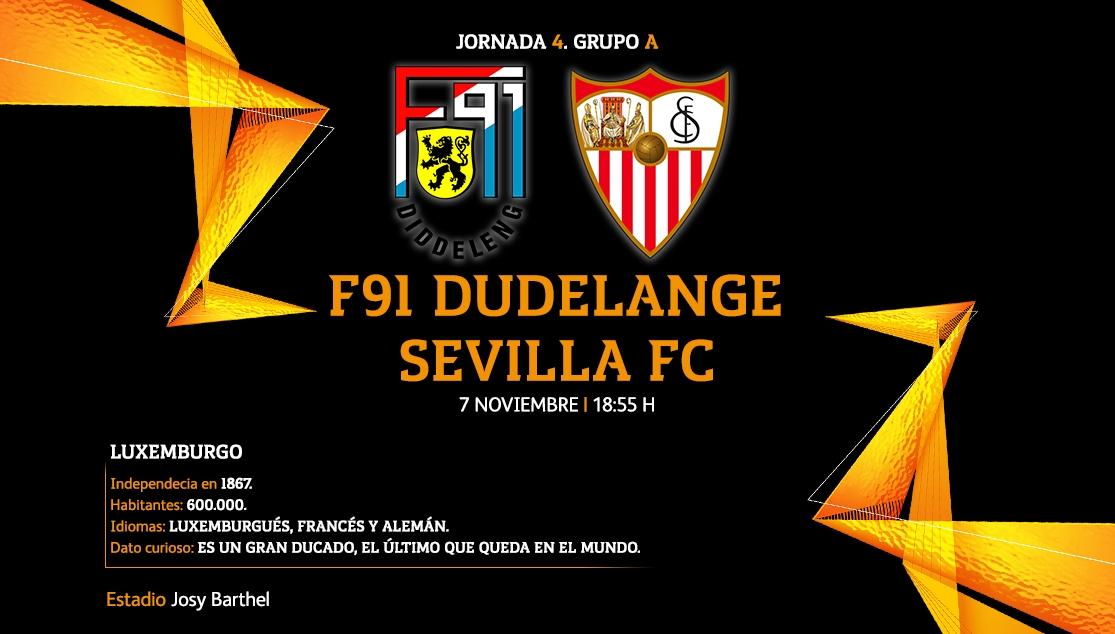 TAKING IT ONE GAME AT A TIME

Sevilla FC will have their second European away day in Europe this season tomorrow, and can make sure of their passage through to the knockout stages of the competition with a win

For many people this isn't just any old week in the city of Seville: as there is the small thing of the 'Gran Derbi' coming up on Sunday. Beforehand, there's a Europa League game to deal with and whilst the media were focusing on Sunday's encounter at the Villamarín when the President took time to speak to them, they didn't get anywhere. The reason being because tonight, Thursday 7th November, Sevilla have a tough task ahead of them. There's a possibility that the team could cement their place in the knockout stages of the competition. The maths are simple enough and their road to the Round of 32 will be secured with a win at the Stade Josy Barthel. Additionally, if Qarabag aren't able to win in Cyprus and Sevilla win, the team from Nervión will go through as group winners.

In fact, even a draw could be enough to secure Sevilla's passage to the next round. However, for this to happen, they will need for APOEL to not win in Azerbaijan. That being said, a point in Luxembourg would leave the team needing to seal their place in the knockout rounds in the last two games of the group. For Dudelange, who only achieved one point in the group stages last year (against Betis), to be at this point of fighting for qualification is already an achievement - after their spectacular win over APOEL in the first match marked an historic night in the club's history. They are a modest club when it comes to talking about European football, but have been the main club in their country in recent times.

Dudelange surprised everyone with their win over APOEL, in Cyprus, in the first matchday

In fact, the sixth place which they currently occupy in their own league is a complete rarity when we look back over recent years. That is to say that in the last nine league campaigns, Dudelange have been crowned champions on seven occasions - coming second and third in the other two seasons. It's possible that the distraction of European football has played to their downfall in their league campaign; as the same has happened to Qarabag where the team has had to move to a bigger stadium in order to host European football. Additionally, something which Qarabag don't have to do, is that Dudelange have to move city as well from Dudelange, to a Luxembourg city which is close to the French border. This is the Luxembourg national team's stadium, Josy Barthel, which holds around 8,000 people.

Changes to the team are expected, and Lopetegui will have to discard two names for the final matchday squad. The players who were left in Sevilla were Banega, Jesús Navas, Koundé and Ocampos, as well as Carriço who is continuing to step up his return from injury. The starting XI is expected to be very different from that of Saturday past, which means that all the squad will need to be called upon at some point over the course of the season. The two new additions to the squad are reserve team players: Amo and Mena. As for Dudelange, they will still have their own hopes of qualification as after our game, they still have another two fixtures left: at home against APOEL and then they finish off their group stage away to Qarabag.

The Icelandic referee, Vihjalmur Thorarinsson, will take charge of the fixture and being only 35 years of age, he is relatively new on the international scene. In fact, this will be only his second UEL encounter after refereeing last years fixture between FC Dynamo Kyiv and FK Jablonec.