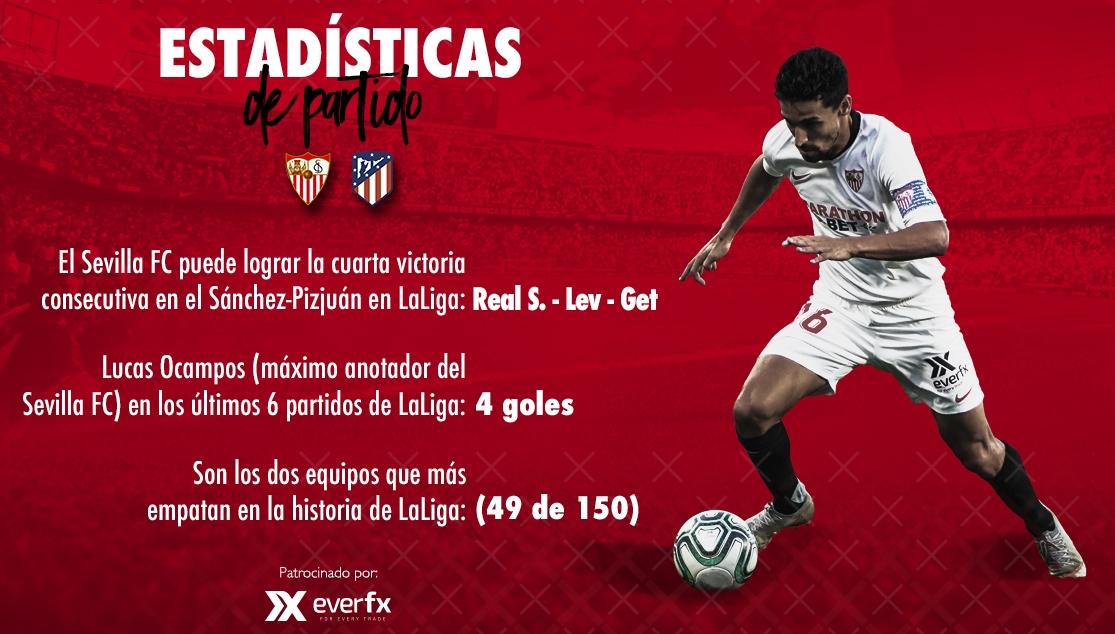 GEARING UP FOR THE SECOND KEY MATCH OF THE WEEK

With an injury-hit defence, Lopetegui's men are looking to defeat a competitive Atlético side to make Wednesday's point against Valencia even better

The overused football cliche of only focusing on what's coming up will have even more justification this Saturday, if that's possible. When the match gets underway in Nervión, not even 70 hours will have passed since the final whistle at the Mestalla on Wednesday night. That period of time simply isn't enough to recover for a match, especially when we're talking about two highly demanding matches. After a hard-fought draw at the Mestalla, it's time to focus on the visit of Atlético de Madrid to the Ramón Sánchez-Pizjuán. They have become a very tough side to beat since Simeone took charge, but this is not just for Sevilla FC.

Since the Argentine became manager eight years ago, Sevilla have only managed to beat them in just one league match. This was a 1-0 win, with the only goal from Nzonzi, and came in 2016/17, during Jorge Sampaoli's reign as manager, and was a tremendous tactical battle, almost more chess-like than football. That match was also played at a rainy Nervión, and it could well be another rainy day today. It was also played with both sides high up in the league table, and Sevilla were able to end Atlético's unbeaten start to that season.

Sevilla's only league win came in 2016/17, thanks to an Nzonzi goal

However, Atlético arrive here having already lost this season, after losing 2-0 at the Anoeta in the fourth match of the season. They come into this game in fourth place, just a place above Sevilla due to goal difference. Simeone will also not be able to count on Giménez, Savic, Vrsaljko, nor his new star Joao Félix, who are all injured. This means that Simeone, the ex-Sevillista, will probably line-up with Mario Hermoso and the Brazilian defender Felipe at centre-half, with Lodi and Trippier at full back.

Lopetegui does not have a much better injury situation himself, especially in defence. Of course, we await the confirmation of today's squad, but it looks like Carriço, Sergi Gómez and Escudero are all ruled out due to injury, and Fernando is banned due to picking up five yellow cards. Reguilón is a doubt for the match too, so this could see Koundé cover at left-back. It certainly seems like Gudelj will play, either replacing Fernando or pairing up with Diego Carlos in the defence, as was the case at the Mestalla. Aside from this, everything depends on what the manager wants to do in terms of rest or giving players minutes. Of course, next week sees us travel to Luxembourg before the away derby on Sunday.

The squad will be confirmed imminently

Both managers were full of praise for each other in yesterday's press conferences. Lopetegui described Atlético's squad as "one of the best five teams in the world", while Simeone highlighted Lopetegui's new-look Sevilla side: "I really like this Sevilla side. Since Lopetegui arrived, their style of play is now very forceful, very clear, very quick, very versatile, with very good squad rotation, whether it's in Europe or LaLiga, their players are always fresh. They have many option but above all at full-back, both Navas and Reguilón especially, they give the side a new dimension, and they have very good players in the middle of the park too. We are in for a tough game".

José Luis González González from Castile and León is tonight's referee, which does not bode well for Sevillistas in terms of his numbers. In the 27 games that he has refereed, Sevilla have lost 16 times, drawn four times and only managed seven wins. This is the first time he will referee Sevilla this season. The last match he took charge of came last season away at Girona, a 1-0 defeat. Atlético have crossed paths with this referee this season, when he refereed the goalless derby at the Wanda. Martínez Munuera from Valencia will be overseeing VAR.