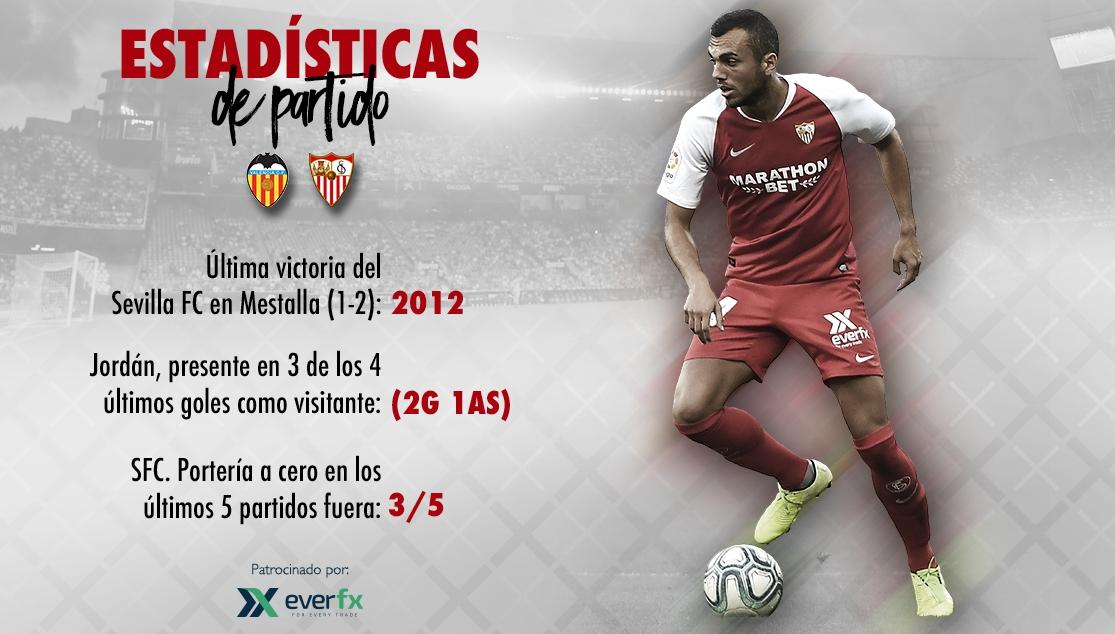 TRYING TO REDISCOVER OUR FORM AWAY FROM HOME

After climbing up the table with victories over Levante and Getafe, Sevilla will be looking to continue their good form at an away ground where they haven't won since 2011/12

After the small blip in the road after defeats away from home against Eibar and Barcelona, Sevilla FC returned to Nervión to get back on track in La Liga. The come to this midweek match in a good position in the league table, only a point off the leader Granada. On top of going well in the Europa League, victories at home in the league against Levante and, of course, Getafe, have allowed the team to regain the confidence that, for a period of time, they seemed to have lost. The match away to Valencia is, without doubt, one of the toughest matches of the season.

And, if the away trip to Valencia isn't enough, the match after is none other that at home against Atlético Madrid. There's no doubt that this is a crucial week for the team that could lift them even further up the table; or, on the other hand, see them languishing somewhere else. Against Valencia, both Carriço and Sergi Gómez are out injured and in Tuesday's final training session before heading to Valencia, Lopetegui included reserve team players Felipe and Amo. Javi Díaz and Dabbur are included in the squad that travelled to Valencia.

As for our opponent, we will have to see their reaction after the aftermath of their last defeat in Pamplona, a defeat in which their striker, Rodrigo Moreno, got sent off. Furthermore, two former Sevilla players, Gameiro and Cheryshev, will also not be available; whilst Piccini and Guedes are also on the list of absentees. Valencia's head coach, Albert Celades, will have midfielder Kang In Lee back in his arsenal, after he served his suspension. Celades, much like his counterpart Lopetegui did in his press conference, praised his adversary tomorrow as they spoke about their time together working for the Spain national teams.

In recent years, it's fair to say that the Mestalla hasn't always been the most pleasant of grounds for Sevilla to visit. Their last victory here came in the 2011/12 season, thanks to goals from Medel and Jesús Navas as they recorded a 2-1 win. Since then, Sevilla have lost five times and drawn twice - even though, last season, Sevilla were moments away from winning but were denied by a last gasp Valencia goal. Since this victory in 2012, the best memory they have taken from the stadium has to be the defeat in the UEFA Europa League. They were beaten 3-1, and it's perhaps the sweetest defeat that Sevilla have experienced in recent years.

Since the victory in 2011/12, they have lost five times and drawn twice in the league

Valencia have underwent an interesting start to the season as they continue to fight in the Champions League, and underwent a turbulent time after the exit of their former manager Marcelino García Toral. However, they will be looking to improve their league position which at the minute sees them sit around mid table. That being said, we must remember that last season, the scenario wasn't too different for Valencia at this stage of the season - and they ended up qualifying for the Champions League in fourth place, and winning the Copa del Rey.