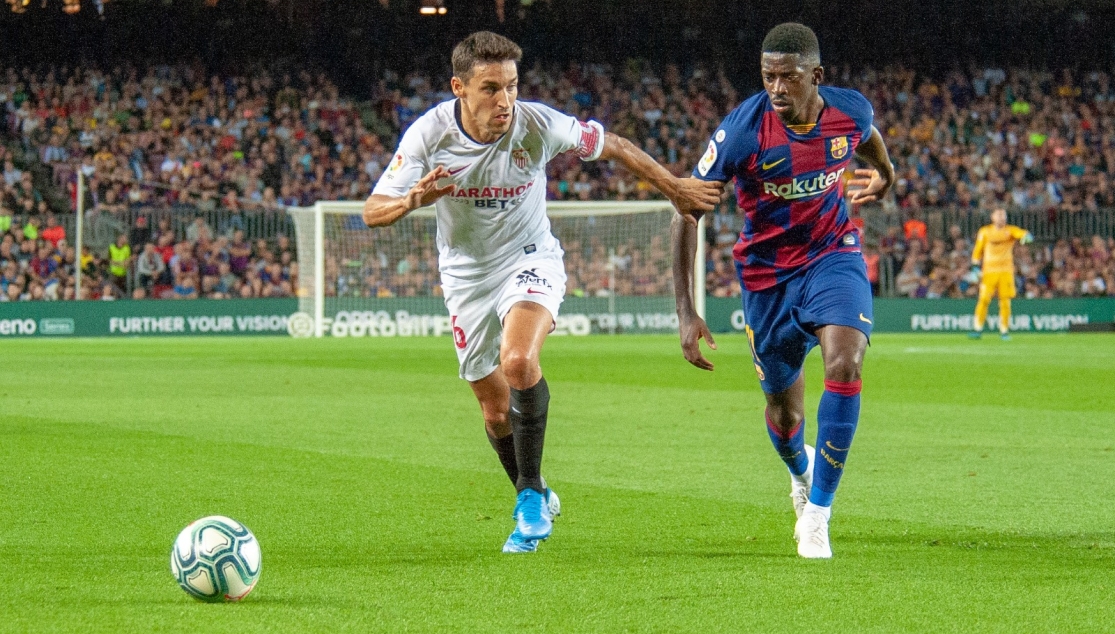 After a promising opening 30 minutes, Sevilla were roundly beaten by goals from Luis Suárez, Vidal, Dembelé and Messi. Barcelona ended the game with nine men

Above all else, after performances in the last few years, Sevilla were asked to compete, to test Barcelona at their own stadium. And in the first thirty minutes, Sevilla did just that, playing like they had done in their opening away games this season. The team were not distracted by playing at the Camp Nou, they pressed, got high up the pitch and into Barcelona's box, making Ter Stegen work hard. However, unlike the Nervionenses, Barcelona had their first chance on 27 minutes, and Luis Suárez scored an overhead kick. From then on, all of Sevilla's hard work was washed away by Valverde's men. Another defeat at a stadium where Sevilla have not won a league match for 17 years.

As soon as the game started, Sevilla surprised their opponents. Messi barely had a touch of the ball in the opening minutes, when De Jong forced Ter Stegen into making a save inside eleven minutes, after a cross from Navas. Seconds later, Fernando had Ter Stegen beaten with a header, but it went just over the bar. De Jong then had another clear chance at the far post, but his left-footed shot was wide of the mark. Meanwhile, Barcelona were playing on the counter but without testing Vaclík. A 3-0 lead for Barcelona at half time was unimaginable, but after De Jong headed wide again, this time with too much power, Barcelona then landed a hammer blow.

After Sevilla dominated for 27 minutes, their hard work was immediately undone

Semedo crossed from the left and Suárez converted with an overhead kick at the far post, right into the bottom corner, which was impossible for Vaclík to save. Sevilla did not even have time to respond, as barely five minutes later, Vidal was played clean through and lifted his shot over the Sevilla goalkeeper. Sevilla were in shock, and Dembelé extended the lead ten minutes before half time with a placed shot into the bottom corner. There was glimpses of a reaction just before half time, but once again there was no luck on our side. Above all, as a chance from Ocampos flashed just past Ter Stegen's right-hand post.

Lopetegui made changes at half time, with Joan Jordán and Munir coming on as the team tried to find their early rhythm. Early on, De Jong had another chance, after winning the ball on the edge of the box, but his shot hit the post, which would have made it 3-1. The Catalan side calmed the game down as the minutes wore on, against a Sevilla side that did not switch off, but the Barcelona side that had condemned Sevilla in the first half was nowhere to be seen. The final substitution from Lopetegui saw Chicharito come on for De Jong, a game where the Dutchman had no luck whatsoever.

Matches against Barcelona have a recurring event, and once again it happened, in the 78th minute. Messi scored his first LaLiga goal of the season with a free kick that had Vaclík beaten, another cruel blow for a Sevilla side who had nothing go their way. Despite the scoreline, it is worth highlighting the defensive performances of Fernando and Diego Carlos, whose work was not reflected in the scoreline. As a footnote, Barcelona ended the game with nine men, as both Araujo and Dembelé were sent off in the final few minutes. Now, the second international break of the season is about to start, and the first game after the break is at home to Levante UD.