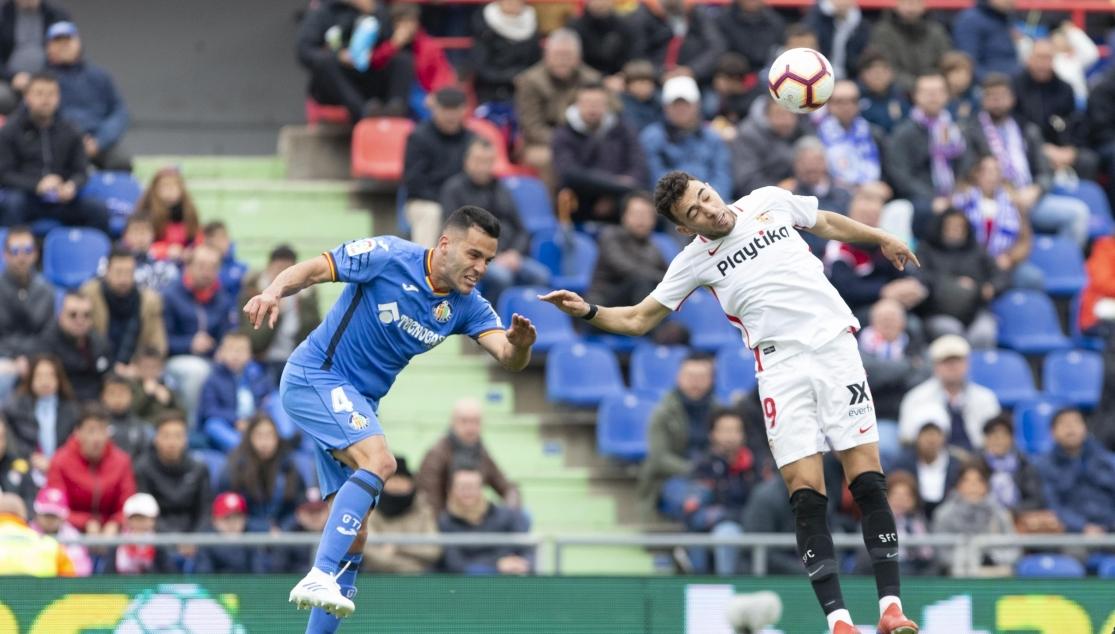 3-0: TWO PENALTIES AND A RED CARD FINISH SEVILLA OFF IN GETAFE

After two chances to go into the lead at Getafe, two penalties and a red card ended Sevilla's hopes against Getafe who now move into fourth place

Sevilla FC suffer defeat in Getafe after three consecutive wins which had put them into fourth spot in the league, a spot they have now given up against the Madrid side. Two penalties for handball in the box ended Sevilla's hopes of taking a win away from Madrid. The Nervionenses move down to the Europa League spots, being overtaken by Getafe.

The game started evenly with both teams looking to take control of the game. Getafe played long balls and looked to win second balls while Sevilla looked to play a more possession-based game. After two chances for Sevilla midway through the first half, the game began to escape from the away side. Franco Vázquez fired a volley just over the bar and then Ben Yedder tried a shot from distance which Soria did well to stop.

The referee consulted VAR twice to give two penalties against Sevilla, sending off Escudero for a double yellow

With the game in Sevilla's hands, everything changed in the 34th minute. Mateu Lahoz consulted VAR after a supposed handball from Vázquez in the box and blew for a penalty which Mata converted. The same thing would happen just before the break. The referee went to the screen and pointed to the spot for the second time and sent off Escudero for a double yellow. Molina made it 2-0 and Getafe went into the break in control.

The second half would start no better for Sevilla, with Molina scoring from a cross from Mata. The third goal finished the game off and Joaquín Caparrós opted to save his men for Thursday's clash against Rayo Vallecano at the Ramón Sánchez-Pizjuán.

Getafe also finished with ten men after Djené's sending off

Mateu Lahoz consulted VAR once more, this time to send Djené off for a harsh tackle on Jesús Navas. Promes, just before the end, missed a clear chance in a one-on-one against Soria after a through ball.

Sevilla return to action on Thursday night at 19:30 against Rayo Vallecano, with Caparrós' men looking to return to winning ways to continue the fight for fourth place.