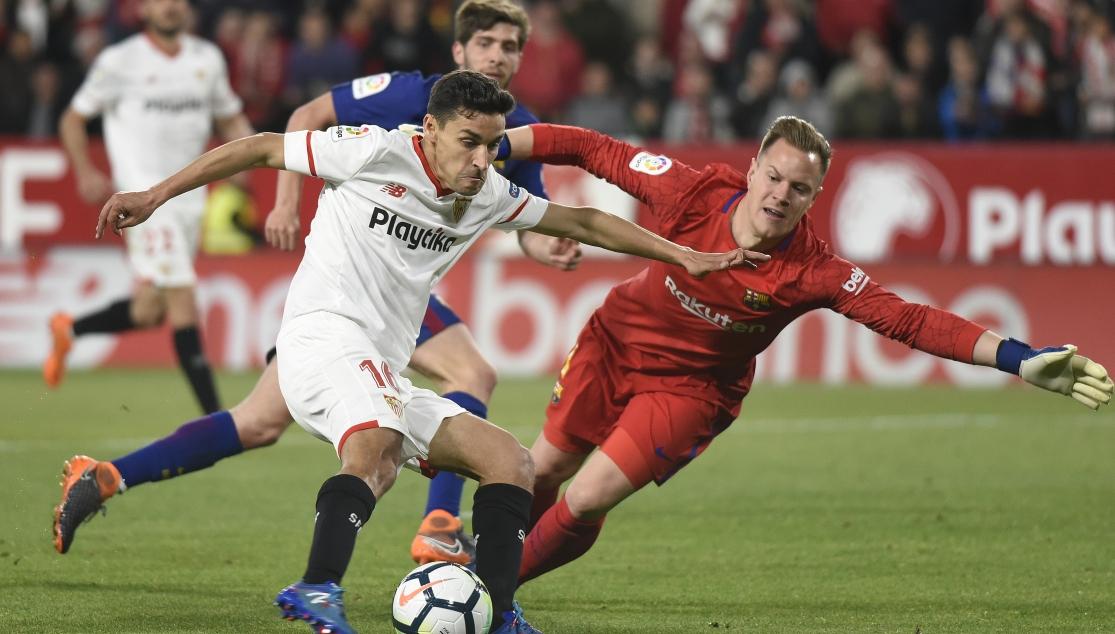 ON THE BRINK OF GLORY ONCE AGAIN

History may have reserved a title for Sevilla FC that has been won by FC Barcelona three years in a row. Playing in the Club's ninth Copa del Rey final, the Nervionenses are looking for their tenth trophy of the century. Barcelona look for what would certainly be a domestic double, though Sevilla will come in with an unmatchable determination to stun the favourites and claim the 6th Copa del Rey of their own

A familiar experience. This Saturday night in the Wanda Metropolitano, Sevilla FC faces something it has become accustomed to in recent history: standing front and centre on an elite stage, ready to make dreams come true. Competing in our 22nd final in history (17 coming this century), we now look for a 13th triumph, another trophy to treasure and to rob FC Barcelona of their fourth consecutive success in this competition. We're in for a celebration of Spanish football, in a fixture many teams will never have the fortune of experiencing. The Nervionenses will not leave Madrid having sold themselves short.

With fives stars embroidered in gold onto the shirts that our Sevillistas will pull on before they step out into the Wanda Metropolitano tonight, the world will see a permanent reminder that our latest challenge - to bring a sixth Copa del Rey trophy home to the Ramón Sánchez-Pizjuán and to add a sixth star to the crest - is more than plausible and achievable. A five star performance is what it will take to beat a five star opponent.

FC Barcelona's cup statistics are nothing short of remarkable. No less than 40 Copa del Rey finals; no less than 29 tournament wins; no less than you'd expect from the so named "Kings of the Cup". But facing us in our ninth Copa del Rey Final - our fourth since glory against Getafe in 2007 -  the soon to be La Liga champions will find it difficult to match the frenzied excitement and drive Sevilla will bring to the Wanda Metropolitano. Even more importantly, they'll find it impossible to silence a scorned Nervión faithful, who will remember the pain of defeat against the same opposition in Madrid just two years ago.

Only four Sevillistas who started in the Club's 2016 final loss to Barcelona remain today (Rico, Carriço, Escudero and Banega), while three others (Soria, Pareja and Nzonzi) lived the frustration of watching the game without competing. Vincenzo Montella's starting eleven tonight will naturally have a different complexion and will offer a new challenge to a Barcelona side that has kept eight of the eleven who started that day - only losing Alvez, Mascherano and Neymar. With a close to full-strength squad coming into the game - one that has trained for the last three days in Marbella to prepare for the occasion - the Italian will have the selection headache of picking a new side to do the honours.

Sevilla's starting eleven will be very different to the one that tasted defeat in 2016, where Barcelona will rely on many of the same players

Needing to prioritise what should be a balanced and solid system that can keep Valverde's side quiet, Montella now must show every ounce of his tactical prowess to pull off another seemingly unlikely performance. The only La Liga coach to have tasted an away victory at tonight's venue, the Sevilla manager will have to draw on the same elements that gave the team a famous win at Old Trafford earlier this season, saw the team contain Bayern in the Allianz Arena and handed Sevilla a huge 1-2 win against Atlético in the quarter-finals of this competition.

And two impressive Copa del Rey campaigns suggest that a tactical 12-rounder could be exactly what we're in for. Montella's men boast a better run: with seven wins and one draw in eight matches - compared to los Culés' six matches won, one draw and one loss in Cornellá. Correa has been Sevilla's danger man in the cup so far with five goals, followed by Ben Yedder (3), Navas, Muriel and Sarabia (2). Valverde has so far looked to Messi, Suárez and Arnáiz to find the net (3 each), though Alcácer and Rakitic have posed threats of their own with two goals each in the competition.

Statistics, however, will mean nothing come kick-off. Instead, glory will await the team who can embrace occasion and do their excitement justice with a performance worthy of champions. Sevilla Football Club has shown more than once it is capable of such a performance and has shown more than once that it is capable of conquering Goliath when standing on the brink of history. It's time to show it again, and time to bring back a Copa del Rey title to Seville.