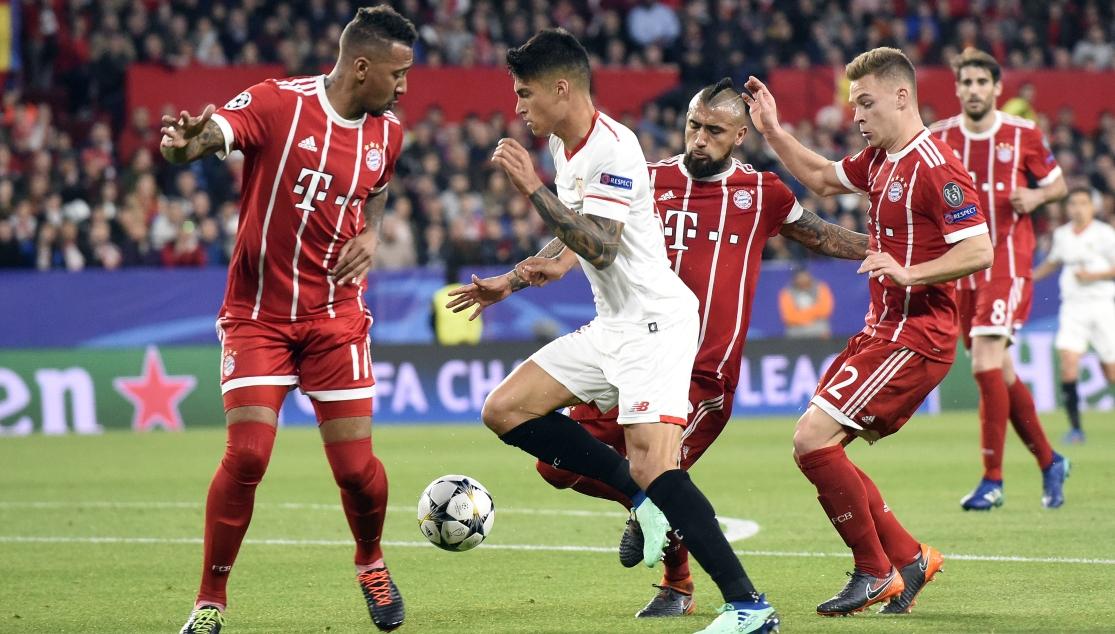 ANOTHER GIANT, ANOTHER CHANCE TO PROVE THE WORLD WRONG

Sevilla FC face Bayern Munich in the Allianz Arena in the second-leg of the Champions League quarter-finals. Having to overturn a 1-2 deficit from the first-leg in the Ramón Sánchez-Pizjuán, the Nervionenses have more than a mountain to climb but have proven themselves capable of doing the seemingly impossible...

The second act of Sevilla FC's first Champions League quarter-final in 60 years hands the side a close to impossible task: overturn a red-hot Bayern Munich who have won their last two home matches 6-0 and who just this weekend secured their 28th Bundesliga title. In the lap of the European elite, financially dwarfed by remaining survivors in the competition, Sevilla have already made history and will now need to prove that they can do it again. Taking a leaf out of the book of a heroic AS Roma side who overturned their Champions League tie last night, Sevilla will need to throw all caution to the wind, knowing they have nothing to lose. We did it in the Theatre of Dreams, why not again in Germany?

We shocked the world once in Manchester, we can do it again in the Allianz

With the spirit Sevilla has so often shown in huge European fixtures, Montella's men face a fixture that will go down in the Club's history regardless of the result. Two teams that, barring one result each, have scored in every one of their Champions League ties so far, now face very different objectives - in Bayern's case to shut up shop, in Sevilla's to come out all guns blazing. Unlucky in many departments in the first-leg, Sevilla will certainly need to cut out an unfortunate run of own goals - which has seen the side put three into their own net in two consecutive games - and will need to show lethal incision when facing either a returning Manuel Neuer or an ever-consistent Sven Ulreich.

At the back, they will have to do without Simon Kjaer, who picked up an unfortunate injury this weekend against Celta Vigo but will have a tested back-line of Navas, Mercado, Lenglet and Escudero at their disposal. In the centre of the park, Sevilla will welcome back Éver Banega with open arms after his first-leg suspension prevented him from contributing his trademark composure on the ball in the Sánchez-Pizjuán. And going forward, Sarabia, Vázquez, Correa, Nolito, Sandro, Muriel and Ben Yedder all travel fit and raring to go. It's a squad that will have no choice but to hand Bayern just their second Champions League loss in 22 games at home and a squad tasked with once again proving that Sevilla FC doesn't know the meaning of the word impossible.

Sevilla have shown goalscoring prowess in the Champions League so far, only failing to score against United at home

With the standard set in Europe by Frenchman Wissam Ben Yedder (8 goals, 10 including the qualification play-off), the Nervión side have shown stamina and grit at this high level of competition. They scored 2 and then 3 goals over both legs against Liverpool (now Champions League semi-finalists), three against Maribor, two against Spartak Moscow and another two against United at Old Trafford. Together with another four (two and two) in the qualification play-offs against the Turkish side Istanbul Basaksehir. Scoring at the Allianz Arena is the first step top making dreams come true. In the opponent's ranks, Lewandowski (5 goals) Muller, Thiago and Tolisso (3 goals respectively) all pose threats.

The Sevilla side has already tasted victory on German soil in European Competition and tonight will mark their tenth visit. The team have won five of nine games played: Borussia Mönchenbladbach, Friburgo, Borussia Dortmund, Stuttgart and Mainz 05 with a draw against Schalke 04. Their three defeats came in ties against Kaiserslautern, Hannover and the previously mentioned Mönchenbladbach. Matching Bayern's 1-2 victory at Old Trafford to get to this stage, a repeat result would throw the Nervionenses into the torture of extra-time and penalties.

But there can be no denying we have our backs against the wall. No away team has won in the Allianz Arena in a competitive football match this season and Bayern come in with more momentum than any side in the competition. Sometimes, though, a fool's hope is enough. We won in the Wanda to put ourselves in the Copa del Rey semi-final; we won at Old Trafford to earn a ticket to Germany; we've won the right to be here. Now it's time to shock the world.