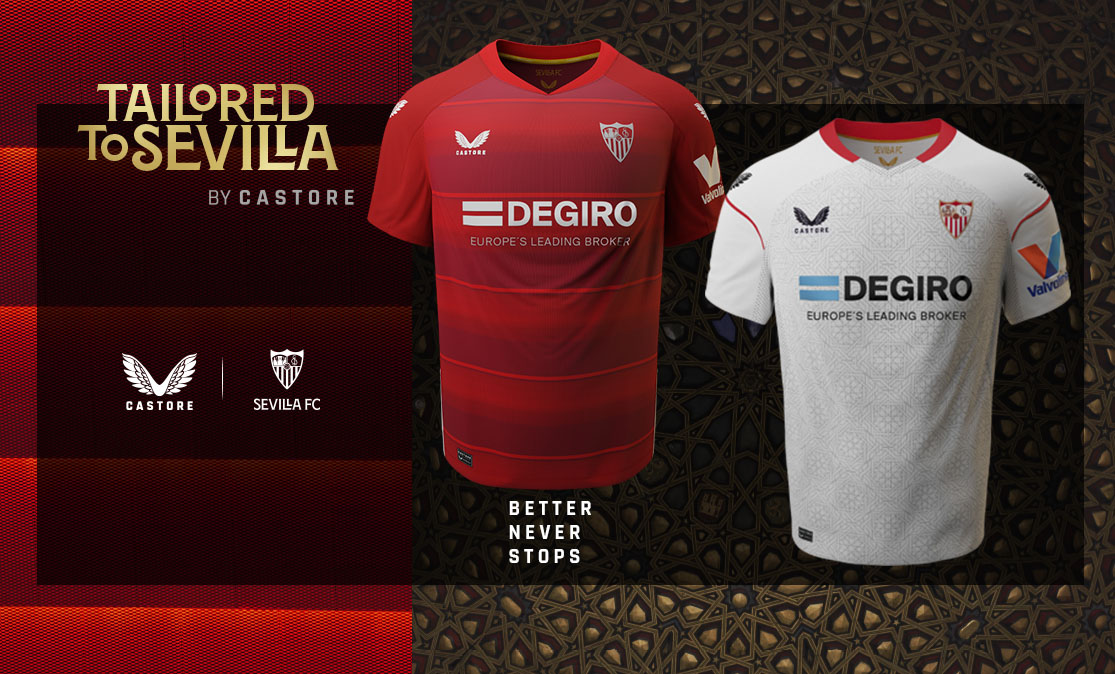 SEVILLA FC LAUNCH OUR MOST SPECTACULAR KITS YET BY CASTORE

Entradilla
Under the slogan "Tailored to Sevilla", the club present our new kits inspired by the sights of our city. The kits will be available online from 1 July and will be coming soon to physical stores.
Cuerpo Superior

Sevilla FC have a brand new look. The partnership with Castore, our new kit supplier, kicks off with the new kits that our players will wear and defend this coming 22/23 season. For the first time ever, our players will be wearing kits with designs inspired by some of the most emblematic monuments of the city whose name we represent: such as the Real Alcázar, the Metropol Parasol and, of course, the Ramón Sánchez-Pizjuán, undoubtedly the most iconic footballing venue in the city and a stadium which has hosted a European Cup final, a UEFA Europa League final and a World Cup semi-final. The kits will be available online from 1 July and will be coming soon to physical stores.

The new designs came about as a clear response to Sevilla fans' desire to have unique kits compared to other clubs. Castore have been able to capture this message by appealing to the history and culture of our city, meaning that Sevillistas can wear shirts that represent them better than ever before. The club wanted to highlight this personalisation with the slogan “Tailored to Sevilla”, with each kit exclusively designed for the club and our fans. These kits will undoubtedly make Sevillistas feel a renewed sense of pride. Castore are committed to the city of Seville - they have a clear vision of the future based on innovation, which translates into premium quality in all its kits.

The first kit is inspired by the Real Alcázar, while the second highlights the night-time illumination of the Sánchez-Pizjuán.

We made public our multi-year partnership with Castore at the end of May. In the first season that is about to get underway, you can see passion that our kit supplier has put into each and every one of the designs. On the signing of the partnership, Sevilla FC President José Castro said that "Castore have come to break the status quo in the world of sporting brands, just as Sevilla have done in Spanish and European football. It is an important step for our club because we are joining forces with a company that shares our values."

Our home kit for 22/23 features a design that echoes the Real Alcázar of Sevilla, while the away kit features horizontal stripes in a clear inspiration and nod to the spectacular night-time lighting of the Sánchez-Pizjuán. Meanwhile, our training kits will be based on the Metropol Parasol in the Plaza de la Encarnación. It remains to be seen what the design of the third kit will be ahead of its unveiling.

Castore first entered the world of football with Rangers FC in the 20/21 season and currently kits out Newcastle United and Wolverhampton Wanderers in the Premier League. In addition to LaLiga Santander, they will also be making their debut next season in other top international leagues. Castore are very present in other popular sports such as rugby, Formula 1 - they sponsor the McLaren Racing team -, tennis and cricket.